How much does it cost to travel to Zhangye?

How much money will you need for your trip to Zhangye? You should plan to spend around ¥493 ($69) per day on your vacation in Zhangye, which is the average daily price based on the expenses of other visitors. Past travelers have spent, on average, ¥147 ($21) on meals for one day and ¥222 ($31) on local transportation. Also, the average hotel price in Zhangye for a couple is ¥440 ($61). So, a trip to Zhangye for two people for one week costs on average ¥6,906 ($963). All of these average travel prices have been collected from other travelers to help you plan your own travel budget.

A vacation to Zhangye for one week usually costs around ¥3,453 for one person. So, a trip to Zhangye for two people costs around ¥6,906 for one week. A trip for two weeks for two people costs ¥13,812 in Zhangye. If you're traveling as a family of three or four people, the price person often goes down because kid's tickets are cheaper and hotel rooms can be shared. If you travel slower over a longer period of time then your daily budget will also go down. Two people traveling together for one month in Zhangye can often have a lower daily budget per person than one person traveling alone for one week.


How expensive is Zhangye? How much money do I need for Zhangye?

How much does a trip to Zhangye cost? Is Zhangye expensive? The average Zhangye trip cost is broken down by category here. All of these Zhangye prices are calculated from the budgets of real travelers.

Looking for a hotel in Zhangye? Prices vary by location, date, season, and the level of luxury. See below for options.

How much does it cost to go to Zhangye? Naturally, it depends on the dates. We recommend Kayak because they can find the best deals across all airlines.

The price of renting a car in Zhangye will depends on dates, the type of car, the location, and your age. We recommend Kayak because they can find the best deals across all car rental companies.

Zhangye On a Budget 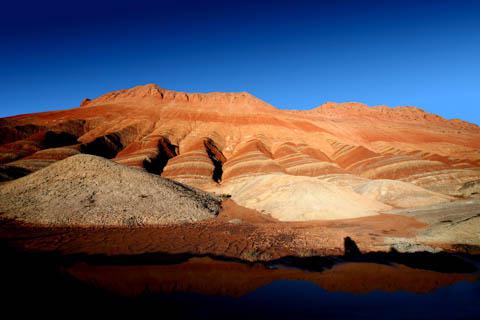 Danxia Landscape, Zhangye, China
Zhangye, China is a city in the Gansu Province in the central north part of the country, close to Mongolia. This ancient city has often been used as a military strong hold, having been the headquarters of General Huo among many others. Zhangye is a fabulous day trip city to visit when staying in larger nearby cities.

Zhangye is privy to beautiful summer weather, with lots of sunshine and temperatures in the high 70's Fahrenheit. The best times to visit are between July and September, when temperatures and sunshine are at their highest. Autumn, Winter, and Spring tend to be a little chillier and rainier.

One of the most popular sights in Zhangye is the Da Fo Si, a Buddhist temple that is known for having the largest wooden indoor reclining Buddha in China. The temple is also thought to be the birthplace of Mongo emperor Kublai Khan.

Go for a stroll through the Blackwater National Site, an archeological site dating back to the Neolithic period. Here, you'll find ancient cultural relics and tombs from the Han Dynasty, although many of the tombs have been buried in sand.

Enjoy the beautiful views of the Zhangye Danxia Lanscape, a small set of parks that are famed for the multicolored rocks on the mountains. The parks are called Danxia and Binggou, with Binggou being the newest of the two. You'll find some of the best examples of the multicolored rocks in Danxia park. If you're using public transport, be mindful of timing as buses stop at 6pm.

Zhangye is the ideal place to take in the natural beauty of China, and what better way to start than with a horseback ride? Take a hike up to the Mati Si Temple then take a horseback ride around the mountain. Along the way, you'll find caves carved into rock and countless other naturally beautiful sights.

If you prefer something even more adventurous, head to Desert Park Sha Mo Gong Yuan. Here, you'll find shifting dunes to climb and beautiful landscapes to view. Just make sure you have plenty of sunscreen and water with you! After a hot day in the desert, take a cool swim in the Hei River.

Zhangye has a fair selection of restaurants, with a wide range of price options. Many of the great food options are located on the main food and shopping streets. One of which is Ming Qing Jie, a food alley where you'll find countless options, including their famous aubergine and pulled noodles. During the day, head to Qing Ming Street, a main pedestrian street which offers a variety of restaurants and shops. Then at night, go to Xiaochichang, a beautiful outdoor area with food stalls and an adjacent indoor food court.

During the summer, the Fan Gun Jie area offers an outdoor beer garden with food stalls. Other nightlife includes a few nightclubs and pubs where you'll find a welcoming atmosphere and a lot of fun.

Zhangye has a domestic airport, a train station, and three bus stations around the city. There are shuttle buses to take you from the bus terminals and train station to the city center.

Getting around the city is fairly easy; walking is a popular option as many attractions are within walking distance of each other. Buses are a good option for getting to areas further away from the city center, although be careful with timing as buses tend to stop running around 8pm. A great option is to rent a private car to take you to the most popular sights outside of the city center. You can book one through a local travel agency or a hotel.