Trying to figure out where to travel next? This travel comparison between Joshua Tree National Park and Bryce Canyon National Park can help. It includes a travel cost comparison in addition to other factors. For many travelers, the cost of a destination is a primary consideration when choosing where to go.

As one of Utah's most popular national parks, Bryce Canyon National Park is over 35,000 acres of breathtaking geological wonders. While it's not actually a canyon, Bryce Canyon is a giant natural amphitheater created by years of erosion.

With 200 miles of visibility, world-class air quality and near-perfect weather from April until October, it's easy to see why this park attracts over one million visitors every year. The series of horseshoe-shaped amphitheaters includes rocks of many colors and unique formations such as slot canyons and spires known as "hoodoos."

Prices for flights to both Bryce Canyon National Park and Joshua Tree National Park change regularly based on dates and travel demand. We suggest you find the best prices for your next trip on Kayak, because you can compare the cost of flights across multiple airlines for your prefered dates.

Also, here are some specific examples of entertainment, tickets, and activities for Bryce Canyon National Park.

When comparing the travel costs between Joshua Tree National Park and Bryce Canyon National Park, we can see that Joshua Tree National Park is more expensive. However, the two cities are actually relatively comparable in price, as the difference is somewhat minimal. Generally, this means that you could travel with generally the same travel style and level of luxury in each place. Since both cities are in North America, it's no surprise that their costs are relatively close, as many destinations here have somewhat similar travel prices overall. 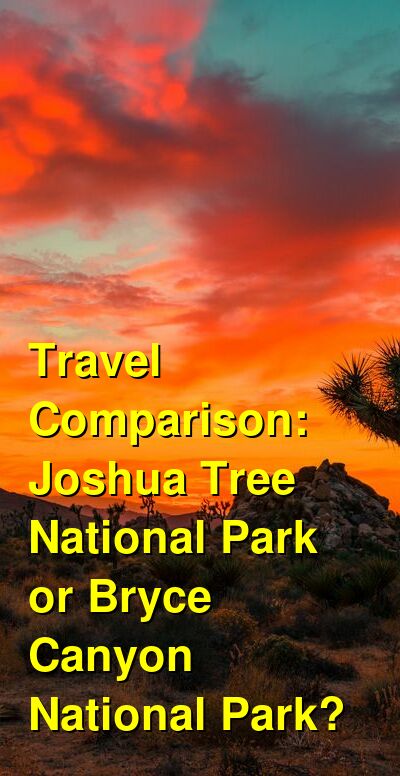