How much does it cost to travel to Inverness?

How much money will you need for your trip to Inverness? You should plan to spend around £134 ($184) per day on your vacation in Inverness, which is the average daily price based on the expenses of other visitors. Past travelers have spent, on average, £39 ($54) on meals for one day and £26 ($36) on local transportation. Also, the average hotel price in Inverness for a couple is £146 ($200). So, a trip to Inverness for two people for one week costs on average £1,881 ($2,573). All of these average travel prices have been collected from other travelers to help you plan your own travel budget.

A vacation to Inverness for one week usually costs around £941 for one person. So, a trip to Inverness for two people costs around £1,881 for one week. A trip for two weeks for two people costs £3,762 in Inverness. If you're traveling as a family of three or four people, the price person often goes down because kid's tickets are cheaper and hotel rooms can be shared. If you travel slower over a longer period of time then your daily budget will also go down. Two people traveling together for one month in Inverness can often have a lower daily budget per person than one person traveling alone for one week.


How expensive is Inverness? How much money do I need for Inverness?

How much does a trip to Inverness cost? Is Inverness expensive? The average Inverness trip cost is broken down by category here. All of these Inverness prices are calculated from the budgets of real travelers.

How much do vacation rentals cost in Inverness? Prices vary by location, date, size of the place, and the level of luxury. See below for options.

How much does it cost to go to Inverness? Naturally, it depends on the dates. We recommend Kayak because they can find the best deals across all airlines.

The price of renting a car in Inverness will depends on dates, the type of car, the location, and your age. We recommend Kayak because they can find the best deals across all car rental companies.

Inverness On a Budget 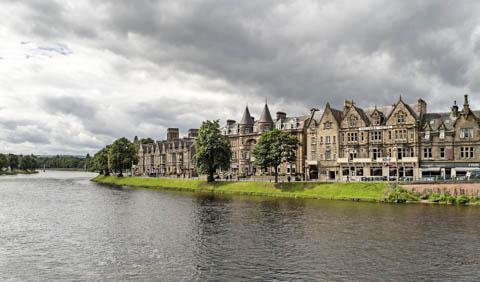 Inverness, Scotland
Inverness is the northernmost city in Scotland, often referred to as the "gateway to the Highlands" as roads through Inverness lead to some of the most beautiful places in the Highlands. The city and surrounding area have a centuries old history, ranging from the battle of Culloden in the 1700's to Urquhart Castle that dates back to the 13th century. Inverness is the ideal place to explore Scotland's history and beauty, especially on a walk through the city or along the shore of the Firth. The warmest time of year is from June to September with temperatures usually in the 60's Fahrenheit and lighter rain. The rest of the year tends to be rainy and colder, with temperatures in the 40's Fahrenheit.

Inverness is in the perfect location, right at the beginning of the Highlands, and offers fantastic sights of natural wonders and architecture steeped in history. North of the city center is Fort George, an 18th century army barrack that combines incredible architecture with the stunning beauty of the Moray Firth around it. Head south to the Culloden Battlefield, the site of the last battle of the Jacobite Rising, which holds great importance to the Scottish people. Further south past the battlefield is Loch Ness with the impressive ruins of the 13th century Urquhart Castle on its shores. You can take a wander along the shores or even catch a boat ride from the Loch Ness visitors center to the castle. Inside the city center of Inverness, you'll find Inverness Castle and Inverness Cathedral, both of which date back to the mid 1800's and feature stunning red brick architecture.

The major area of interest for tourists in Inverness is the city center near the castle and River Ness, as the rest of the city is far more residential. The city center is also where you'll find the majority of accommodation and restaurants. North of the city is Fort William, an old army base and beautiful viewpoint. Just across the Moray Firth from Fort William is Chanonry Point and Lighthouse where you'll get great views of the Firth, a chance at seeing dolphins, and an opportunity to relax on the pebble beach there. South of Inverness is Loch Ness and Urquhart Castle, the area is famous for its supposed sea monster, Nessie.

One of the best ways to explore the city is on foot by taking one of the walking trails. The River Ness and Caledonian Canal path takes you along the riverbank by the castle, then over a bridge to the sea wall where you may even see some Moray Firth Dolphins when the tides change. For a better chance at seeing the dolphins, head to Chanonry Point where you'll find a delightful pebble beach that is perfect for dolphin spotting. Get out of the city center and go for a small hike to Plodda Falls, a gorgeous waterfall hidden in the forest. If you happen to be around in July, you may see the annual Inverness Highland Games where locals compete in traditional Scottish sports that are thousands of years old.

Inverness has a wealth of options when it comes to restaurants, ranging from upscale seafood on the River Ness to delicious Thai and Indian food. If you're looking for traditional Scottish fare, head to one of the many pubs where you'll find lamb and potatoes as the stars of the menu. Enjoy freshly made whisky at the Glen Ord Distillery and the Tomatin Distillery, both of which you can tour and taste some of their finest whiskies.

Inverness has a domestic airport that accepts flights from around the UK and offers a bus service to take from the airport into the city center. You can also get into Inverness via train or bus from Edinburgh and Glasgow. It is fairly easy to get around the city thanks to the easy to use bus service and the commuter train, the Invernet. Inverness is a very walkable city as well, especially in the central area near the castle. If you want to go further outside of the city to some more major Highland destinations, you can book a coach with one of the many tour companies in the area.