How much does it cost to travel to York?

How much money will you need for your trip to York? You should plan to spend around £85 ($116) per day on your vacation in York, which is the average daily price based on the expenses of other visitors. Past travelers have spent, on average, £26 ($35) on meals for one day and £9.49 ($13) on local transportation. Also, the average hotel price in York for a couple is £94 ($129). So, a trip to York for two people for one week costs on average £1,187 ($1,624). All of these average travel prices have been collected from other travelers to help you plan your own travel budget.

A vacation to York for one week usually costs around £594 for one person. So, a trip to York for two people costs around £1,187 for one week. A trip for two weeks for two people costs £2,375 in York. If you're traveling as a family of three or four people, the price person often goes down because kid's tickets are cheaper and hotel rooms can be shared. If you travel slower over a longer period of time then your daily budget will also go down. Two people traveling together for one month in York can often have a lower daily budget per person than one person traveling alone for one week.


How expensive is York? How much money do I need for York?

How much does a trip to York cost? Is York expensive? The average York trip cost is broken down by category here. All of these York prices are calculated from the budgets of real travelers.

How much do vacation rentals cost in York? Prices vary by location, date, size of the place, and the level of luxury. See below for options.

What did other people spend on Food in York?

Typical prices for Food in York are listed below. These actual costs are from real travelers and can give you an idea of the prices in York, but your costs will vary based on your travel style.

How much does it cost to go to York? Naturally, it depends on the dates. We recommend Kayak because they can find the best deals across all airlines.

The price of renting a car in York will depends on dates, the type of car, the location, and your age. We recommend Kayak because they can find the best deals across all car rental companies.

What did other people spend on Alcohol in York?

Typical prices for Alcohol in York are listed below. These actual costs are from real travelers and can give you an idea of the prices in York, but your costs will vary based on your travel style.

York On a Budget 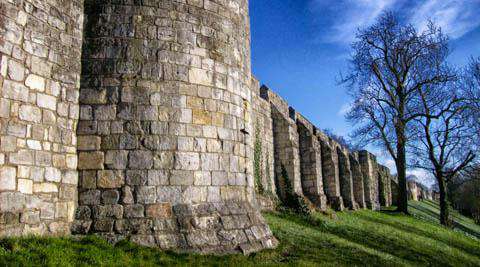 York Castle Walls, England
York, in North Yorkshire, England, is a city rich in history that dates back to before Roman times. It is an ancient cathedral city that still has some impressive historical buildings that make it easily worth a visit. It has some of the best preserved buildings and structures in all of Europe, so if you're a history buff, then this is the place to be. It is usually tied with Manchester as the second most visited city in England, after London.

The city itself has a population of about 180,000. It's a relatively small place and you can see most of the major sights in a few days time. There is a great atmosphere however, so if you have more time to spend, you won't find yourself bored. York is also a city of festivals. There are many cultural festivals every year, so if you find yourself in town during one, make a point of checking it out.

Popular sights in town include York Minster, which is the largest cathedral in northern Europe, the JORVIK Viking Centre, the York Castle Museum, the National Railway Museum, the Ruins of St Mary's Abbey, Clifford's Tower, and Merchant Adventurers' Hall among many others. A great way to experience the sights is to take a walking tour of the city. There are many vendors who offer this option, and one interesting twist on the idea is to do a ghost tour. Ghost tours usually take place in the early evening and offer some insight into the city's history in an interesting, story telling fashion that appeals to adults and children alike.

Central York is where you'll spend a lot of your time as a visitor. It is one of the largest pedestrianised zones in Europe. The fountain on Parliament Street always has something going on, whether its a chess tournament, dance festival, or market. To the north of Parliament Street is the Shambles, which is a 14th century street. You'll also find the daily market in this area. East of the Shambles is Fossgate, which has many restaurants and pubs. St. Helen's Square is west of Parliament Street. There are some good shops in this area. The Latin Quarter, York Minster, and St. Williams College are in Minster Quarter. South of Parliament Street is Coney Street, which is a major shopping area. Finally, head to Micklegate for a good nightlife scene.

There are plenty of activities that you can enjoy in York. Make sure you take some time to walk around the city wall. It takes about an hour and offers some great views. Also explore the Snickleways, which are the famous medieval alleys that weave their way through the city. The theatre scene in York is excellent and you can go to the Grand Opera House for a variety of different types of shows.

Dining options are plentiful in York, and your cheapest options are likely to be the traditional pubs you'll find around town. They generally serve basic pub fare at a reasonable price. Another interesting option is to grab some food at the cafeteria in an old church by Whip-Ma-Whop-Ma-Gate. They offer affordable food which can be enjoyed on the grass outside.

Definitely visit Roots, an amazing restaurant by renowned chef Tommy Banks. Check out this review of Roots in York for more info.

If you have a little more money to spend, consider trying some of the curry or pasta options around town. For a more luxurious dining experience head to York's restaurant district on Fossgate and Walmgate where you can enjoy tea rooms or high end bistros which can be delicious and lots of fun.

Your best option in York is to avoid driving, as the roads were not originally designed for cars. The old town area is pedestrian only during day time hours with an exception being made for disabled drivers and emergency vehicles. You can easily walk between sights, but do use caution after 4:00PM when the roads are opened back up to traffic. There's also a bus option that can take you elsewhere in the city. A day pass will set you back almost four pounds, but is well worth it if you plan on taking more than a couple of trips on the bus. York is also a very bicycle friendly city and this can be a fun way to explore the sights and get a feel for the town's atmosphere.