How much does it cost to travel to Oxford?

How much money will you need for your trip to Oxford? You should plan to spend around £86 ($117) per day on your vacation in Oxford, which is the average daily price based on the expenses of other visitors. Past travelers have spent, on average, £32 ($43) on meals for one day. Also, the average hotel price in Oxford for a couple is £99 ($135). So, a trip to Oxford for two people for one week costs on average £1,199 ($1,641). All of these average travel prices have been collected from other travelers to help you plan your own travel budget.

A vacation to Oxford for one week usually costs around £600 for one person. So, a trip to Oxford for two people costs around £1,199 for one week. A trip for two weeks for two people costs £2,399 in Oxford. If you're traveling as a family of three or four people, the price person often goes down because kid's tickets are cheaper and hotel rooms can be shared. If you travel slower over a longer period of time then your daily budget will also go down. Two people traveling together for one month in Oxford can often have a lower daily budget per person than one person traveling alone for one week.


How expensive is Oxford? How much money do I need for Oxford?

How much does a trip to Oxford cost? Is Oxford expensive? The average Oxford trip cost is broken down by category here. All of these Oxford prices are calculated from the budgets of real travelers.

Find a hostel, guesthouse, or B&B in Oxford

Oxford On a Budget

Oxford, England
Oxford is a city in England best known as the home of the 12-century Oxford University, the oldest English-speaking university in the world. The city also features landmarks such as Christ Church, the Bodleian Library, and a number of world-class museums.

Rather than being contained within a campus, Oxford University is rather spread across the city itself with around 40 colleges and associated buildings. One of its landmark buildings is the Bodleian Library, the University's main research library and one of the oldest in Europe, having opened in 1602 with the collection of Thomas Bodley. Other University landmarks include the Hertford Bridge or "Bridge of Sighs" (a pedestrian bridge for the use of Hertford College students), the Sheldonian Theatre (iconic for its collection of busts surrounding the building), the Taylorian Institute (for the study of European languages), and the University Church of St Mary the Virgin. Some of the best views of Oxford can be seen from the 13th-century tower of the church.

Oxford University also has a vast number of colleges, some of which are open to tourists during certain times of the year. One of the best-known is perhaps Christ Church, especially due to its associations with Lewis Carroll, author of Alice in Wonderland, as well as its use as a film location for the first Harry Potter film. Other notable Oxford colleges include Magdalen College, Exeter College, New College, the Queens' College, All Souls, Worcester College, Lincoln College, and University College-all unique and admirable in architecture ranging from 18th Classical style to Victorian Neo-Gothic.

Oxford is built around an intersection of roads that cross at the Carfax Tower, a landmark bell-tower that was once part of a 12th-century church. High Street or "The High" runs east-west, while the north-south thoroughfare consists of St Giles and St Aldates. The two north-south streets are actually one continuous stretch divided by the pedestrian Cornmarket Street, with St Giles running to the north and St Aldates running to the south. Most of the city's landmarks and museums branch out from this central area, along with plenty of opportunities for dining and shopping.

In addition to sightseeing and admiring the medieval architecture of the colleges and churches of Oxford University, the city also features a number of important museums. The Ashmolean Museum is one of the most impressive, and one of Britain's oldest public museums, opening in 1683. Collections from the museum feature ancient art and artifacts from Egypt, the Near East, Greece, and Rome, as well as Western examples and a vast Eastern Art exhibit. A few other museums include the Oxford University Museum of Natural History, the Pitt Rivers Museum, and the Christ Church Picture Gallery.

Oxford also features plenty of green spaces with a number of Oxford University Parks located mostly along the River Cherwell, as well as the University of Oxford Botanical Gardens-Britain's oldest, with both indoor and outdoor plants from around the world.

Additional activities can be found in a variety of tours from touring specific university colleges to walking tours around the city as a whole to a number of ghost tours-all of which give different perspectives on the history and architecture of Oxford.

There are also plenty of opportunities for dining, entertainment, and shopping, for example at oldest covered market in England, which hosts a collection of small shops selling things like chocolate, cakes, flowers, glassware, meat, hats, and more.

Like most cities, Oxford has a rich and varied dining scene. Traditional fare of England consists of anything you might find in a British pub-fish and chips, bangers and mash (sausages and mashed potatoes), stews, soups, and just about any kind of meat pie you could ask for (often called pasties). A few additional specialties include black pudding (black sausage), steak and kidney pudding, pickled eggs, and plenty of coffee and tea shops. With England's imperial history, curry is also a very popular specialty in many British cities, including Oxford. English pubs can be found just about everywhere, as well as kebab and pizza shops, but there are also plenty of restaurants serving Asian, Indian, Italian, American, and more.

The nearest commercial airports to Oxford are those around London to the southeast, Birmingham to the north, and Southampton to the south. Most foreign travelers prefer the London airports, especially Heathrow and Gatwick. Transportation from both airports is available through the Oxford Bus Company. Birmingham Airport has fewer destinations than the London airports, but is closest to Oxford with its own railway station. Southampton has fewer flights as well, but also has a train and low-cost airlines. 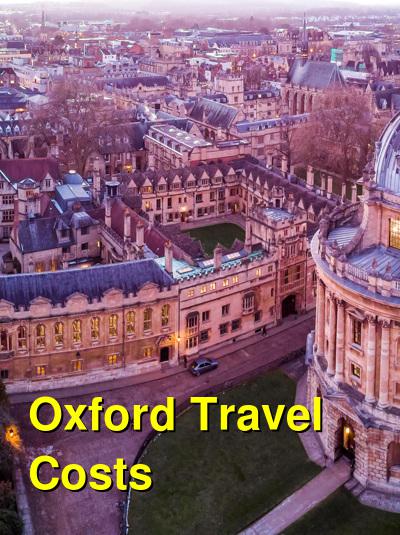