How much does it cost to travel to Flagstaff?

How much money will you need for your trip to Flagstaff? You should plan to spend around $133 per day on your vacation in Flagstaff, which is the average daily price based on the expenses of other visitors. Past travelers have spent, on average, $44 on meals for one day and $30 on local transportation. Also, the average hotel price in Flagstaff for a couple is $138. So, a trip to Flagstaff for two people for one week costs on average $1,863. All of these average travel prices have been collected from other travelers to help you plan your own travel budget.

A vacation to Flagstaff for one week usually costs around $932 for one person. So, a trip to Flagstaff for two people costs around $1,863 for one week. A trip for two weeks for two people costs $3,727 in Flagstaff. If you're traveling as a family of three or four people, the price person often goes down because kid's tickets are cheaper and hotel rooms can be shared. If you travel slower over a longer period of time then your daily budget will also go down. Two people traveling together for one month in Flagstaff can often have a lower daily budget per person than one person traveling alone for one week.


How expensive is Flagstaff? How much money do I need for Flagstaff?

How much does a trip to Flagstaff cost? Is Flagstaff expensive? The average Flagstaff trip cost is broken down by category here. All of these Flagstaff prices are calculated from the budgets of real travelers.

Looking for a hotel in Flagstaff? Prices vary by location, date, season, and the level of luxury. See below for options.

How much does it cost to go to Flagstaff? Naturally, it depends on the dates. We recommend Kayak because they can find the best deals across all airlines.

The price of renting a car in Flagstaff will depends on dates, the type of car, the location, and your age. We recommend Kayak because they can find the best deals across all car rental companies.

Flagstaff On a Budget 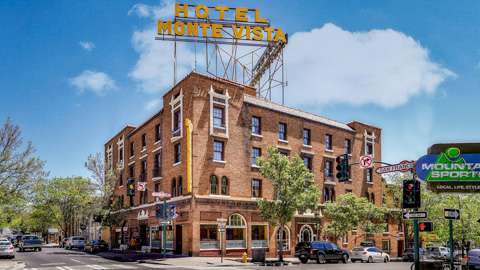 Flagstaff, AZ
Located in northern Arizona near the San Francisco Peaks mountain range, Flagstaff is a small city surrounded by natural beauty. The city's proximity to a number of popular tourist sights, including Grand Canyon National Park, Oak Creek Canyon, the Arizona Snowbowl, Meteor Crater, and Historic Route 66, make it a common destination for tourists. It lies at an elevation of almost 7,000 feet with nearby areas climbing higher. In large part because of its altitude, the city has a cooler climate than the southern part of Arizona, which is famous for its low lying desert.

Many people use Flagstaff as a base or hopping off point to explore Arizona's other nearby attractions, but there are a number of interesting sights within the city as well.

The Arboretum of Flagstaff is a 200 acre botanical garden that includes a nature center and an environmental research station. It's abundant wildflowers are impressive and beautiful and there are a number of educational programs as well.

Lowell Observatory is an astronomical research center that is notable as the place that originally discovered the dwarf planet of Pluto. There are tours and frequent evening programs.

Riordan Mansion State Historic Park has a 1904 house that was once home to a prestigious local family.

The Museum of Northern Arizona has exhibits on Native American life in the area as well as folk art and the region's natural history.

Downtown Flagstaff is narrow and squeezed between the NAU campus to the south and the Museum of Northern Arizona to the north. Northwest Flagstaff, just north of Downtown, is where the Snowbowl and the Museum of Northern Arizona are located. West Flagstaff is to the south and west of Downtown. This is where the airport, Pepsi Amphitheater, and NAU are located. East Flagstaff has a large residential area with a more rural feel. It is also where you'll find the Harkins movie theater, the city's main mall, and a country club and golf course.

Buffalo Park is located on top of McMillan Mesa and is Flagstaff's "urban forest park".

Flagstaff has a number of nearby activities that visitors can enjoy. The nearby Arizona Snowbowl is one of only three places in Arizona where you can enjoy skiing. Also nearby are countless places to hike, mountain bike, or go rock climbing. Head to Mount Elden for a wide variety of outdoor activities including the popular Elden Lookout Trail, which climbs from the base to the summit, ending with a spectacular view of the city. Another popular hike is Mt Humphrey's Peak, which begins at Snowbowl Ski Lodge. While the hike starts relatively easy, be prepared for the final stretch to get intense.

Flagstaff has a wide and diverse range of restaurants to choose from. There are a number of different ethnic restaurants around town including Mexican, Chinese, Thai, Indian, and more. There are also a wide range of styles, including cafes, breweries, bars, bistros, and fine dining options. Local restaurants are common, but so are the typical chain restaurants that you find in most major cities.

Located along Route 66, Flagstaff is a small city with a simple bus system. It's very beneficial to have a car to explore the area, especially because there are many popular sights outside of town.

The city does have a well developed bike system, and many roads have designated bike lanes. The Flagstaff Urban Trails System has over 50 miles of paved and unpaved trails that wander through town.