Tickets, What to see, & How to get there

Asia / India / Uttar Pradesh / Agra /
Who hasn't had the glimpse of this architectural wonder in India? Located on the bank of holy Yamuna River in the city of Agra, embellished with unnumbered of resplendently decorated buildings, standing proudly close to world-wonder Taj Mahal, and illustrating the elevated grandeur of Mughals, the Agra Fort is the most important and robust stronghold of Mughals, without that, not even a single chapter of Mughal history can be written. The fort impeccably recites the intellectual vision and the architectural inclination of Mughal emperor Akbar-The Great. The prolonged royal capital of Mughals has managed to pass through the tides of time and is inscribed as a UNESCO World Heritage Site today.

The History of Agra Fort 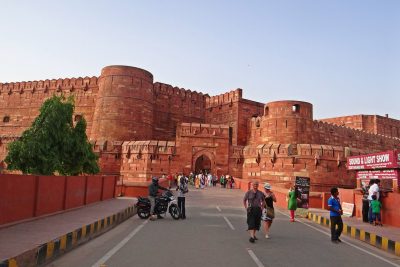 The history of Agra Fort is as long as the empire and strength of Akbar itself. The Agra Fort had come a long way to become the royal capital of Mughals. When the fort was originally built, is unknown but the first mention of Agra Fort came in 1080 when Gaznavid rulers captured it. At that time, it was merely a brick fort owned by a Rajput king Raja Badal Singh and was known as Badalgarh Fort. Since then, it was owned by several rulers of different dynasties before Akbar came into power. It was when started the actual history of this fort.

From a raw sketch, he gave the soaring heights to this fort. This region of Agra city was so important from the political aspects that every ruler wanted to capture it. In 1558, Akbar came to Agra from Delhi and after analyzing the significance of this region, he never went back to Delhi again. He remodeled the Agra Fort from head to toe and made it the royal capital of Mughals.

The fort remained with Mughals until Marathas conquered it in the early 18th century. Then came British. They captured the fort in 1803 and used it for their own purposes. After freedom, it again fell into the hands of India. 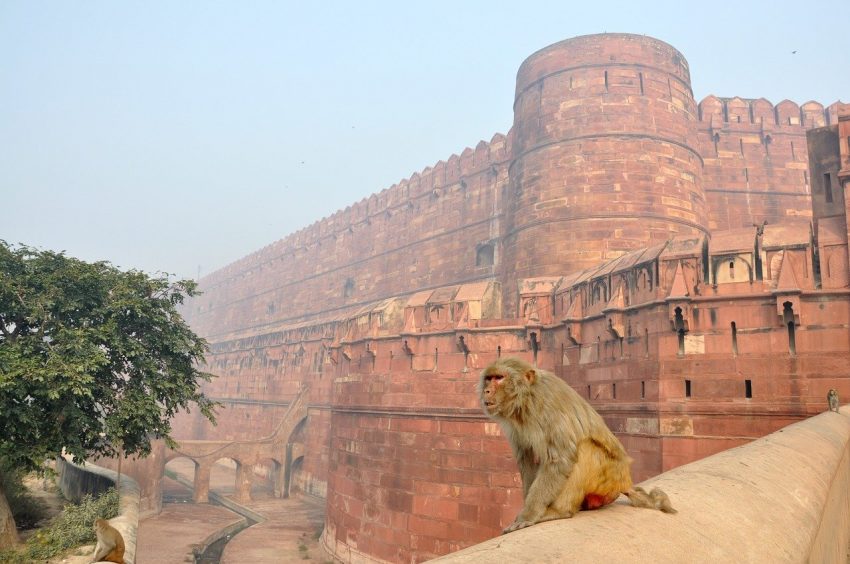 Construction of the Agra Fort

Spread over in a vast area of 94 acres in a triangular form, Agra Fort is an ineffable illustration of Mughal architecture. Akbar was an emperor who respected and adopted good things from every culture and that can be clearly seen in Agra Fort. Built with red stones brought from Rajasthan, Agra Fort is an explicit specimen of Indo-Islamic architecture somewhat like Amber fort in Jaipur. The construction of the fort was started in 1558 under the supervision of Mohammad Kasim Khan and it took 8 years to get completed in 1873 after working around 4000 laborers daily.

In Agra Fort, the unbreakable double walls reaching up to 20 m and spreading in a circumference of 2.5 km are built with red stones and the inner core is built with bricks. Outside these walls, there is one more wall of 70 feet high, which surrounds the fort completely and was mainly built for the security purpose. In those days, River Yamuna used to flow touching this wall. This wall was made in a way that enemies can be bombarded easily from inside itself. 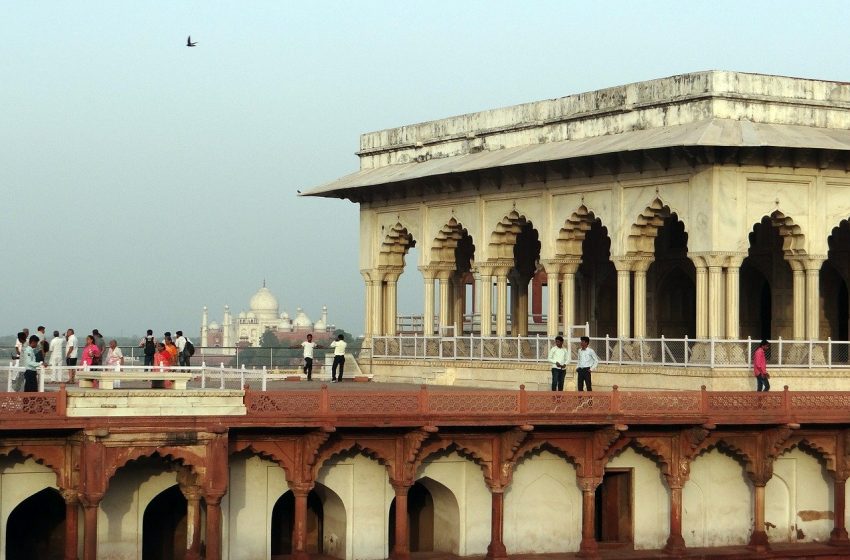 The double ramparts of the fort have many marvelous bastions, palaces with all possible royal amenities, battlements, armories, embrasures, machicolations, gardens, mosques, and whatever you can think of a royal construction. The construction of this fort defines the foresight vision of Akbar. In Akbar's period, there were 500 imposing palaces built with a consummate mix of Bengali and Gujarati design which were assigned to his Begums. In all the palaces, there were hollows in the wall filled with water. Thus, cool breeze used to flow into the chambers.

The Fort consists of 4 gateways. Amar Singh Gate, earlier known as Akbar Darwaza, is the main entrance gate having octagonal towers on each side. On the western side, opens up the Delhi Gate or Lahore Gate which worked as the main gate during the enemy attack. Embellished with white marble, this gate is the grandest of all and held the entire security of the fort. The remaining two gates are Kizri Gate and Gazni Gate which ensured the safety of the fort completely.

After Akbar, the fort remained the same in Jahangir's regime but when Shahjahan, the grandson of Akbar, came into power, he destroyed a few portions of the fort and commissioned some new structures using white marble. After the Mughals, British demolished a major portion of the fort and built their own barracks. Still, the magnificence and sublimity of Agra Fort stand high and enthrall everybody.

Things to see in the Agra Fort 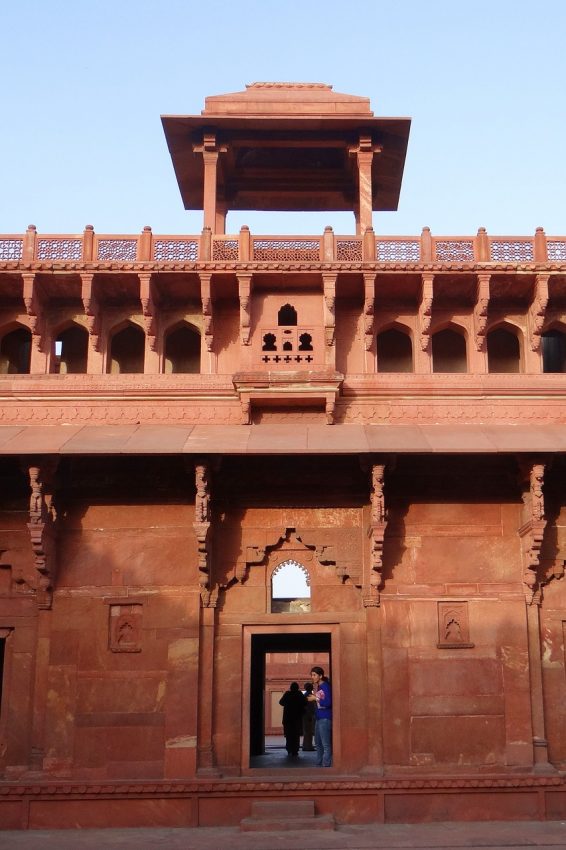 Call it 'Fort Rouge', 'Lal Qila of Agra', or 'Qila-I-Akbari' these all names belong to the unexceptionally resplendent monument of Mughals- The Agra Fort. I'm falling short of words to describe the dozens of exalted monuments that Agra Fort comprises. Each one of these monuments has embraced a history within itself so, how could they all be summed up in a single article. So here, I'm just naming out the must-visit places of Agra Fort.

If you want to feel and get closer to the Mughal history, the Light & Sound Show of Agra Fort is a must-watch in your visit to the fort. Be the unrivaled majesty of Emperor Akbar or the immoral love-story of Emperor Shah Jahan and his Empress Mumtaz Mahal, the Light & Sound Show of Agra Fort portrays it all exceptionally and rejuvenates the entire Mughal history as if it happened yesterday only. The show bounds the people to forget the rest of the world for one hour. Below are all the details about the show.

Tickets are available at the Counter as well as Online

How to get to Agra Fort

Agra is the most famous tourist destination in India. So, the city is well connected by all the modes of transportation. The fort has its own railway station named 'Agra Fort Railway Station', just at 2 minutes' drive from the fort. Moreover, Raja ki Mandi and Agra Cantt are also two major railheads to get the fort just at the distance of 4.7km and 4.9km respectively.

If you're going by airways, Kheria Airport is the nearest airport, 8.1 km far from the fort. Another possibility can be Pandit Deen Dayal Upadhyay Airport which is also very near to the fort. Within half an hour, you would be standing in front of the massive facade of the fort. Local taxis, autos, buses, and rickshaws are available every single moment connecting the entire city. You can go by your own vehicles too but inside the fort, vehicles are not allowed.

Open every day from 7:00AM - 6:00PM
Photography is allowed at no extra charge. 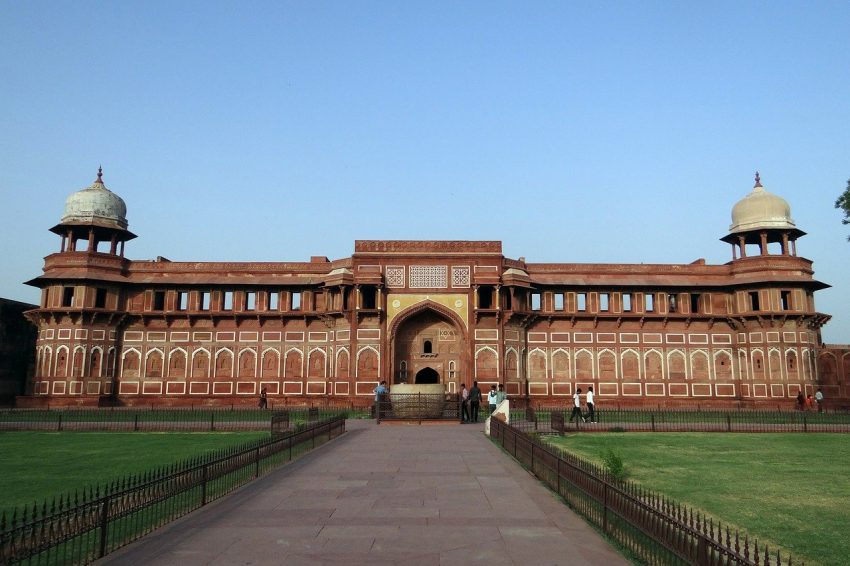 When you're in the city where the world-wonder Taj Mahal is located, you don't have right to worry about the accommodation. For every kilometer, you can find hundreds of luxurious and budget hotels. Here are the best hostels near the Taj Mahal, for example. Here's a look at the best options in within one kilometer of the Agra Fort.

According to the historians, Akbar had spent 35 lacs rupees in this fort and it took 8 years to get completed.

In the fort, Shahjahan built a white marbled multi-storied palace named 'Musamman Burg' for his beloved queen Mumtaz Mahal which turned out to be a prison in his last years. The Musamman Burg offers an exotic view of Taj Mahal.

Out of 500 Akbari Buildings, today, hardly 30 are left. Some buildings were destroyed by Shahjahan in order to make space for his palaces and the remains were wrecked by the British.

Agra Fort is known to have had the largest state treasury and mint during the Mughal realm and it was visited by many foreign ambassadors and eminent personalities including Shiva Ji Maharaja.

Agra Fort was the nerve centre during the Indian rebellion of 1857.

In 2004, Agra Fort won the Aga Award for its peerless architecture and to commemorate this event, 'India Post' issued a special stamp.

Today, Agra Fort is a UNESCO World Heritage Site and is well maintained. It is one of the major tourist attractions in Agra and entices masses of visitors daily alone. Presently, much of the fort is occupied by the Indian Military and is not open for the public exhibit. Still, it is always thronged with the people.

Over the course of time, Agra Fort has served many emperors and experienced a set of transformation from a dilapidated Badalgarh Fort to the cluster of more than 20 monuments. Today, the Fort is an assimilation of different cultures, history, and architectural styles that leave the visitors curious to know more and more about it.

Priyanka writes about lifestyle, culture, and travel throughout India. On her blog, WitsAdda, you can learn about traveling to India. You can also follow her on Facebook. 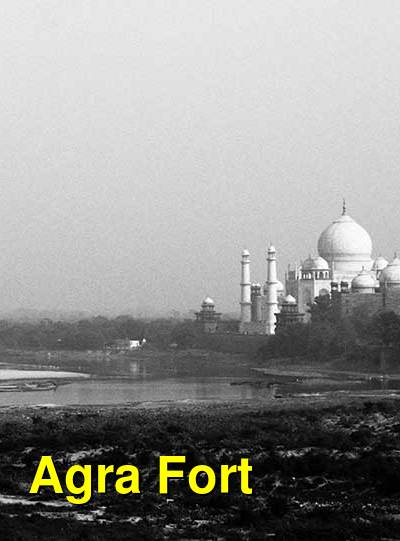