How much does it cost to travel to Udaipur?

How much money will you need for your trip to Udaipur? You should plan to spend around ₨1,321 ($18) per day on your vacation in Udaipur, which is the average daily price based on the expenses of other visitors. Past travelers have spent, on average, ₨392 ($5.23) on meals for one day and ₨141 ($1.88) on local transportation. Also, the average hotel price in Udaipur for a couple is ₨1,489 ($20). So, a trip to Udaipur for two people for one week costs on average ₨18,492 ($247). All of these average travel prices have been collected from other travelers to help you plan your own travel budget.

A vacation to Udaipur for one week usually costs around ₨9,246 for one person. So, a trip to Udaipur for two people costs around ₨18,492 for one week. A trip for two weeks for two people costs ₨36,985 in Udaipur. If you're traveling as a family of three or four people, the price person often goes down because kid's tickets are cheaper and hotel rooms can be shared. If you travel slower over a longer period of time then your daily budget will also go down. Two people traveling together for one month in Udaipur can often have a lower daily budget per person than one person traveling alone for one week.


How expensive is Udaipur?

How much does a trip to Udaipur cost? Is Udaipur expensive? The average Udaipur trip cost is broken down by category here. All of these Udaipur prices are calculated from the budgets of real travelers.

While meal prices in Udaipur can vary, the average cost of food in Udaipur is ₨392 per day. Based on the spending habits of previous travelers, when dining out an average meal in Udaipur should cost around ₨157 per person. Breakfast prices are usually a little cheaper than lunch or dinner. The price of food in sit-down restaurants in Udaipur is often higher than fast food prices or street food prices.

The cost of a taxi ride in Udaipur is significantly more than public transportation. On average, past travelers have spent ₨141 per person, per day, on local transportation in Udaipur.

How much does it cost to go to Udaipur? Naturally, it depends on the dates. We recommend SkyScanner or Kayak because they can find the best deals across all of the airlines.

How much money do I need for Udaipur?

How much do tours to Udaipur cost? Multi-day tours can often be an effecient way to see the highlights of a country or region.

Find a hostel, guesthouse, or B&B in Udaipur

Udaipur On a Budget 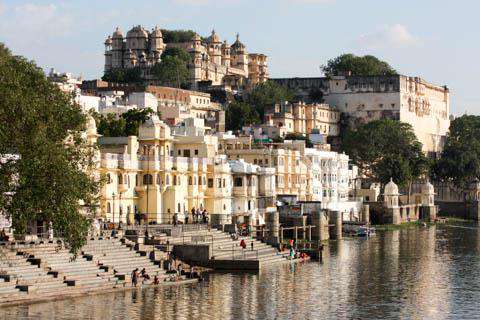 Udaipur, India
Udaipur, also known as the "Venice of the East," is becoming increasingly popular as an Indian wedding destination as well as with travelers searching for a romantic and picturesque city, rich with history, scenic areas, and palaces.

The "City of Lakes" is located in south of Rajasthan. There are a total of ten lakes in the lake system, which are connected and sustain water for drinking, irrigation and industrial use, which contributes to another reason for Udaipur's booming tourism: alcohol.

Udaipur has ideal climate and available water to support a liquor plant while a number of other Indian states ban the consumption of liquor altogether. Many local tourists, such as those from the neighboring dry state of Gujarat on the west, visit Udaipur specifically for this reason, especially considering that Gujarati alcohol prices are much higher and liquor must be purchased through the black market. It's no wonder why Udaipur is the destination for celebrations and vacation.

Udaipur has tropical weather and three main seasons, which are summer, monsoon, and winter. Winter, which takes place between September to March, is the most pleasant time to visit for sunny and warm days and cool nights.

Udaipur has numerous palaces, religious landmarks, gardens museums, lakes, and other natural scenic areas to keep anyone busy, and this city should definitely be on any Rajasthan itinerary

Take a boat ride on Lake Pichola to see the must-visit and historical places of the city or simply sit on the bank and enjoy the sunrise or sun features carvings set.

Get back to nature at the Udaipur Gardens for a stroll through lush greenery for a sense of peace and serenity from the otherwise dry brushlands of Rajasthan.

The City Palace, which took a span of 400 years to build, is the biggest royal complex in the state and is full of history and culture, featuring the crystal gallery, stained glass and carved windows, numerous courtyards and a museum containing sculptures and antiques. As with many tourist sites, note that there's an extra charge to bring in a camera.

Just a short walk from the City Palace is the largest temple in the city, Jagdish Temple, dedicated to the Hindu god Vishnu. The three-story temple features intricate carvings and decorated ceilings and painted walls.

On the southern island of Lake Pichola, Jag Mandir Palace was originally built by Maharana Karan Singh as a hiding place for Prince Khurram, featuring the eight elephants carved out of white marble.

Turn up the romance at the white marble Lake Palace, initially meant to be a summer getaway for royalty, it has since been turned into a top-notch hotel. Take in the dreamy aura created by the vastness of the palace's beautiful architecture in the middle of the lake.

The Monsoon Palace, originally built to watch for incoming monsoons, overlooks Fateh Sagar Lake and is an ideal place to get a panorama of the lakes, palaces and countryside.

For a cultural experience at an affordable price, visit Bagore Ki Haveli, a townhouse on the bank of Lake Pichola and watch an hour-long Rajasthani folk dance performance and puppet show starting at 7 p.m.

There are cities and towns surrounding Udaipur that are great for day trips. Delwara is a small town that's about thirty kilometers north of Udaipur where you can experience the lifestyle and culture of a traditional Indian village. About sixty kilometers away, Jagat Village is worth taking a day trip to as you can see the Jagat Temple that is renowned for the intricate and ancient carvings on its exterior.

After exploring so many palaces and temples, the adventurous traveler may be ready for an excursion to the Kumbhalgarh Wildlife Sanctuary, which protects many species of endangered wildlife.

Just 3 kilometers outside of Udaipur, Shilpgram, an arts and crafts village, is a wonderful place to visit to learn more about history, culture and rural handicrafts from all over the country. Camps and workshops are held here to spread awareness and share the art of embroidery, pottery, weaving, mirror works, and folk music.

Immerse into Indian music by learning to play the sitar, tabla, or flute with Prajapati Musical Instruments. Whether you're a novice or a seasoned musician, you will be sure to enjoy the teacher, Suresh's music instruction and concert.

There are some cultural shows that happen in the town of Udaipur. The Dharohar Dance Show, which includes a marionette puppet show, live music with traditional instruments, and folk dancing. This takes place at Bagore-ki-Haveli and costs 100 Rupee.

For a different kind of cultural experience, learn how to cook naan, masala chai and curries with a cooking class. Several options are available. Enjoy Cooking Class has great options for where you can choose which ingredients you like and dislike. There is also a meditation room and many different types of teas to taste during your class. Also, Shashi's Cooking Class is another place to try your hand at traditional Indian cooking. She offers group classes, which are run out of her own personal kitchen.

You can take a bicycle tour of Udaipur with Art of Bicycle Trips, which includes aspects of Indian art, heritage, and culture. Horseback riding around Tiger Lake is another great activity. Krishna Ranch offers half and full day options as well as multi-day safaris where you camp overnight.

If you enjoy spicy food, then Udaipur is the perfect place for you. The city is famous for its mirchi bada and kachori, which are delicious, spicy snacks. Other specialties include lentils and rice (Dal Baati Churma), onion balls (Pyaz Kachori), and dumplings with curry (Gatte Ki Sabzi).

Other regional specialties include laal maas, the famous red meat curry made with mutton, which is a specialty of the idyllic open-air restaurant, Ambrai, set on the bank of Lake Pichola. Bhuna kukda is a chicken dish marinated in Rajasthani spices and Each of these and other local recipes can be tasted at the Taj Lake Palace Hotel.

Try the legendary and local-loved Natraj Lodge, which serves vegetarian Indian fare and is famous for its quick service and bottomless thalis.

Grassland Cafe is the place to be for simple cafe fare such as sandwiches, smoothies, and coffee as well as free wifi.

If you're ready for a break from local food or just more options, Savage Garden offers hearty Western cuisine in addition to its Indian food. Try the falafel and homemade pasta; the arrabiata will be sure to pack a punch with Udaipur's use of chili.

Satisfy your sweet tooth with diljani, a sweet originally from Udaipur and sold at the JMB, a large sweet shop in the Bapu Bazaar, also known for its vegetarian savory kachoris and mirchi vadas.

Udaipur is accessible by air via daily flights from the New Delhi and Mumbai airports. The Dabok Airport is 25 kilometers from the city center. Because there are no buses between the airport and the city center, your best bet is to hire a taxi from the airport or arrange for hotel pickup. You may also hire a private car such as Uber or Ola, another Indian ride-sharing mobile app.

If you're coming by private car from the north, make a stop at the magnificent Ranakpur Jain Temple, said to be the most breathtaking of all Jain temples, as it's constructed completely out of marble.

Although more time-consuming, buses are also available from neighboring cities; check redbus.in for listings and costs.

Udaipur is also connected to major Indian cities by rail. Though it may take just as long as the bus (if not longer), the train may offer more in terms of comfort. Check irctc.gov.in for listings.

Within the city, autorickshaws (tuk-tuks), Ubers, and taxis are available. However, you may find that walking is the best way to see Udaipur, especially when it comes to the numerous narrow alleyways.