How much does it cost to travel to Pondicherry?

How much money will you need for your trip to Pondicherry? You should plan to spend around ₨2,240 ($27) per day on your vacation in Pondicherry, which is the average daily price based on the expenses of other visitors. Past travelers have spent, on average, ₨734 ($9.00) on meals for one day and ₨379 ($4.64) on local transportation. Also, the average hotel price in Pondicherry for a couple is ₨2,132 ($26). So, a trip to Pondicherry for two people for one week costs on average ₨31,357 ($385). All of these average travel prices have been collected from other travelers to help you plan your own travel budget.

A vacation to Pondicherry for one week usually costs around ₨15,678 for one person. So, a trip to Pondicherry for two people costs around ₨31,357 for one week. A trip for two weeks for two people costs ₨62,714 in Pondicherry. If you're traveling as a family of three or four people, the price person often goes down because kid's tickets are cheaper and hotel rooms can be shared. If you travel slower over a longer period of time then your daily budget will also go down. Two people traveling together for one month in Pondicherry can often have a lower daily budget per person than one person traveling alone for one week.

How much does a trip to Pondicherry cost? Is Pondicherry expensive? The average Pondicherry trip cost is broken down by category here. All of these Pondicherry prices are calculated from the budgets of real travelers.

Looking for a hotel in Pondicherry? Prices vary by location, date, season, and the level of luxury. See below for options.

How much does it cost to go to Pondicherry? Naturally, it depends on the dates. We recommend Kayak because they can find the best deals across all airlines.

The price of renting a car in Pondicherry will depends on dates, the type of car, the location, and your age. We recommend Kayak because they can find the best deals across all car rental companies.

Tips and Handouts Budget in Pondicherry

Pondicherry On a Budget 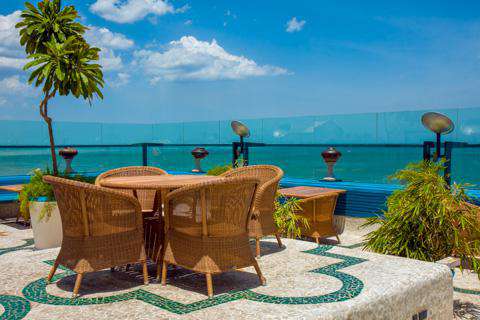 Pondicherry
Located on the eastern coast of India in the state of Tamil Nadu, Pondicherry has a long and interesting history of trade and war as the largest French colony in India. Today the French influence in the city remains, especially in the old quarters. This being said, Pondicherry very much embodies and east-meets-west culture.

With a history rooted in its colonial beginnings, Pondicherry is a great place to experience old world architecture. Remnants of the past are visible in the French Quarter with colonial villas, tree-lined streets, and an overall sense of all that is French. For more history, visit the Pondicherry Museum which houses a collection of sculptures, handicrafts, and archaeological findings from the Arikamedu Roman settlement as well as items from the French colonial time such as furniture and coins, amongst other things.

The Arulmigu Manakula Vinayagar Temple is another common place to visit, built before the 15th century and dedicated to Bhavaneshar Ganapathy-a form of Lord Ganesha, who is known as the remover of obstacles. A beautiful architectural example, the shrine is located about 400 meters from the Bay of Bengal in White Town. Another highly revered religious site is The Basilica of the Sacred Heart of Jesus, situated on the south boulevard of town-a stunning example of Gothic architecture and stained glass windows. Other notable sights include Eglise de Notre Dame des Anges, Immaculate Conception Cathedral, and Varadaraja Perumal Temple.

Pondicherry's French legacy is preserved in its French Quarter (also known as White Town, Black town, and Indian Town). As the name suggests, this part of the city is heavily under French influence with remnants of its colonial past in the grid-pattern tree-lined avenues, architecture consisting of mustard-yellow villas, chic boutiques, and a general aura that is distinctly French. The seafront is also a popular place for visitors and locals to frequent. Goubert Ave (Beach Rd) is a great place to take a stroll right along the coastline, with the French Quarter located just inland from here. The promenade runs along the Bay of Bengal and passes several statues, including a 4 meter-high Gandhi Memorial. Auroville, located just north of Pondicherry, is another interesting place to experience. Established as an experimental town in 1968, the goal was to create an international community of peace and unity. Auroville is currently inhabited by individuals from over 40 different nations.

Beyond the history and architecture mentioned earlier, the beaches of Pondicherry are worth visiting as well. Paradise Beach is a vast shoreline complete with dense palm groves, located about 8 kilometers from the city center. It can be reached by boat from Chunnambar Boat House. Serenity Beach is another treasured shoreline, quieter and more secluded than others in the Bay of Bengal.

Additionally there is the Botanical Garden, featuring six gorgeous fountains, a large aquarium with ornamental fishes, Japanese rock, dancing fountain, and a children's train. Established in 1826, the garden has grown to encompass 22 acres with over 1500 species of plants.

Other activities include city tours, shopping, dining, and experiencing the culture of Pondicherry.

South Indian cuisine usually consists of (mainly vegetarian) dishes eaten with steamed rice. The traditional way of eating a meal involves being seated on the floor with the food served on a banana leaf, using the fingers of the right hand to eat, no utensils. Cooking of the Tamil Nadu area is famous for using a variety of spices to add flavor to main ingredients like rice, lentils, and legumes. One common dish, Biryani, is a type of fried rice with masala cooked with vegetables or meat. Special varieties include Ambur biryani, served with dhalcha (a sour brinjal curry), and Dindigul biryani which uses a little curd and lemon juice to get a tangy taste. Coffee and tea are the staple beverages. In addition to these South Indian delicacies, there is also some French influence to the cooking in Pondicherry, given its roots as the largest French colony in India. Located on the coast, the city's seafood is also very good.

The best way to reach Pondicherry is to travel by road from Chennai, located about 160 kilometers (99 miles) north of the city. The journey takes about three hours along the East Coast Road (ECR), which is very scenic. Another option is to take National Highway 45, also known as Grand Southern Trunk (GST) Road. Both routes are toll roads and take about the same time. One can get a bus from CMBT in Koyambedu or from Thiruvanmiyur or Guindy. Taxis are also available from Chennai Airport.

By train, Pondicherry is connected to Chennai by an electric broad gauge railway line through Villupuram.

By backpackguru in Entertainment
You can easily pass a few hours on the Auroville Campus. There are many shops and street stalls in the nearby areas that are worth checking out. They sell anything from cloths to shoes. The campus itself has trees that help shield you from the intense heat. Head first to the visitor center where you can find out all the information about a visit you need. A main site is the Matrimandir which is in the shape of a golden globe. You have to make reservations in advance to get into the Matrimandir for a meditation session (usually between 9 and 11 AM).