How much does it cost to travel to Hyderabad?

How much money will you need for your trip to Hyderabad? You should plan to spend around ₨3,499 ($45) per day on your vacation in Hyderabad, which is the average daily price based on the expenses of other visitors. Past travelers have spent, on average, ₨1,179 ($15) on meals for one day and ₨870 ($11) on local transportation. Also, the average hotel price in Hyderabad for a couple is ₨3,141 ($40). So, a trip to Hyderabad for two people for one week costs on average ₨48,991 ($627). All of these average travel prices have been collected from other travelers to help you plan your own travel budget.

A vacation to Hyderabad for one week usually costs around ₨24,496 for one person. So, a trip to Hyderabad for two people costs around ₨48,991 for one week. A trip for two weeks for two people costs ₨97,982 in Hyderabad. If you're traveling as a family of three or four people, the price person often goes down because kid's tickets are cheaper and hotel rooms can be shared. If you travel slower over a longer period of time then your daily budget will also go down. Two people traveling together for one month in Hyderabad can often have a lower daily budget per person than one person traveling alone for one week.


How expensive is Hyderabad? How much money do I need for Hyderabad?

How much does a trip to Hyderabad cost? Is Hyderabad expensive? The average Hyderabad trip cost is broken down by category here. All of these Hyderabad prices are calculated from the budgets of real travelers.

How much do vacation rentals cost in Hyderabad? Prices vary by location, date, size of the place, and the level of luxury. See below for options.

How much does it cost to go to Hyderabad? Naturally, it depends on the dates. We recommend Kayak because they can find the best deals across all airlines.

The price of renting a car in Hyderabad will depends on dates, the type of car, the location, and your age. We recommend Kayak because they can find the best deals across all car rental companies.

Hyderabad On a Budget 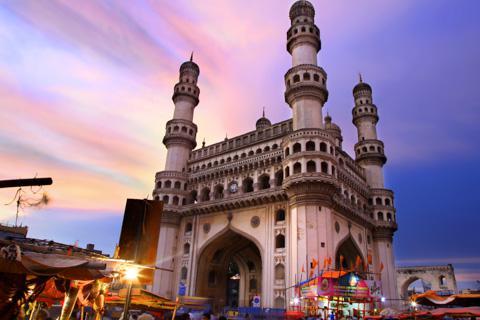 Hyderabad, India
Hyderabad, located in Southern India, is the capital of the state of Telangana. It is a city rich with history and tradition as well as booming in the technology industry, hosting the India headquarters for both Microsoft and Google. In addition to many upscale restaurants and shops, Hyderabad is also home to important historic sites and beautiful landmarks.

Hyderabad is a mix of the old and new, the traditional and the modern, with historic landmarks standing out against contemporary architecture. Charminar has become one such icon of the city, with its four towers soaring above the bustle of the city below. The building was constructed on the spot where Quli Qtub Shali prayed for the plague epidemic to end. There is a mosque inside and the minarets provide a bird's eye view over the city. Mecca Masjid is another impressive sight, one of the oldest mosques in the city and easily the biggest. Large enough to hold up to ten thousand worshippers, the structure was completed in 1694, made out of massive granite bricks. Other outstanding historic sites include the royal Nazim Chowmahall Palace, the massive complex of Golconda Fort, the white marble temple of Birla Mandir, and many others.

Another landmark, located at the heart of the city, is Hussein Sagar Lake. The lake was formed in 1562, during the reign of Ibrahim Quli Qutb Shah, by damming the River Musi, and is now surrounded by beautifully landscaped gardens as well as parks, temples, statues, and historical buildings. At the center of the lake stands a Buddha statue which can be reached by boat.

The Old City is the historical area of Hyderabad with most of its traditional landmarks. It is located on the southern side of the Musi River, while the New City encompasses the urbanized area on the northern banks. The central zone of the city has upscale neighborhoods along with several venues for entertainment and dining. The south and central areas comprise most of Hyderabad's historic and tourist sites with places such as the Charminar, the Mecca Masjid, the Salar Jung Museum, the Nizam's Museum, the Falaknuma Palace, and the traditional retail corridor comprising the Pearl Market, Laad Bazaar, and Madina Circle. The northern end of the city is mostly home to residential, commercial, and industrial areas as well as parks and recreation centers.

In addition to visiting the sights mentioned earlier, the State Museum is also well worth exploring. The museum houses an impressive display of items dating back to ancient civilizations, as well as pieces from more recent periods. Artifacts in the collection range from lotus medallions from the 1st century, to beautiful bedspreads that once belonged to Nizams, as well as sculptures, statues, and other textiles.

Additional activities include a heritage walk of the city, renting a bike to tour the top sites, a visit to one of the local theme and amusement parks, the aquarium, shopping, and much more.

Hyderabadi cooking consists of a mix of Mughal, Turkish, and Arabic along with the influence of the native Telugu and Marathwada cuisines. Main ingredients largely consist of rice, wheat, and meat dishes as well as the skilled use of various spices and herbs. Biryani is a favorite of the city. Hyderabadi biryani has a distinct aroma, garnished with pudina (mint), fried onion, and boiled eggs. Variations include mutton biryani, chicken biryani, biryani khaam, biryani zard or zafrani, or joban malti biryani in which mutton, partridges, and quails are cooked with rice. Street food is another common favorite in Hyderabad, as it is better than most other cities in India and it is cheap.

By train, Indian Railways has service to Hyderabad from all over India. Secunderabad, Hyderabad, and Kachiguda are the three main stations serving the city.