How much does it cost to travel to Lake Garda?

How much money will you need for your trip to Lake Garda? You should plan to spend around €133 ($141) per day on your vacation in Lake Garda, which is the average daily price based on the expenses of other visitors. Past travelers have spent, on average, €33 ($35) on meals for one day and €53 ($56) on local transportation. Also, the average hotel price in Lake Garda for a couple is €135 ($142). So, a trip to Lake Garda for two people for one week costs on average €1,863 ($1,968). All of these average travel prices have been collected from other travelers to help you plan your own travel budget.

A vacation to Lake Garda for one week usually costs around €932 for one person. So, a trip to Lake Garda for two people costs around €1,863 for one week. A trip for two weeks for two people costs €3,726 in Lake Garda. If you're traveling as a family of three or four people, the price person often goes down because kid's tickets are cheaper and hotel rooms can be shared. If you travel slower over a longer period of time then your daily budget will also go down. Two people traveling together for one month in Lake Garda can often have a lower daily budget per person than one person traveling alone for one week.


How expensive is Lake Garda? How much money do I need for Lake Garda?

How much does a trip to Lake Garda cost? Is Lake Garda expensive? The average Lake Garda trip cost is broken down by category here. All of these Lake Garda prices are calculated from the budgets of real travelers.

How much do vacation rentals cost in Lake Garda? Prices vary by location, date, size of the place, and the level of luxury. See below for options.

How much does it cost to go to Lake Garda? Naturally, it depends on the dates. We recommend Kayak because they can find the best deals across all airlines.

The price of renting a car in Lake Garda will depends on dates, the type of car, the location, and your age. We recommend Kayak because they can find the best deals across all car rental companies.

Lake Garda On a Budget 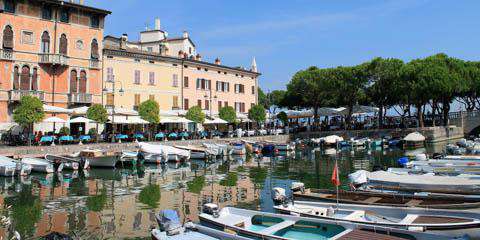 Garda, Italy
As a gentle Mediterranean wind touches your skin, the aromatic fragrances of olive and lemon trees fill the air. Surrounded by lush gardens and Italian architecture in its ancient tans and beiges, you look to the horizon and find a paradise before your eyes: a shimmering lake, misty mountaintops, and a clear blue sky. Lake Garda is a popular holiday destination for locals of the Lombardy region and tourists alike. It has been shown that about 7% of Italy's tourists head straight for these gleaming blue shores. The largest lake in Italy, Lake Garda is located about halfway in between Brescia and Verona and between Venezia and Milano. Because it is surrounded by several different districts - Lombardy, Trentino, Alto, and the Veneto - Lake Garda is a culmination of culture that attracts cosmopolitan crowds. The lake is an ancient natural treasure Italy holds dear, with documents referring to Lake Garda dating as far back as the eighteenth century. The name "Garda" comes from the Germanic word "warda," which means "place of guard." Whether you are staying at one of the many luxurious resorts in Riva del Garda or are simply getting a pedicure in spa town Sirmione, Lake Garda continues to preserve its elegance and sophistication throughout the years.

As Lake Garda is such an expansive body of water, its beaches each attain their own identifiable character, from golden sands to rocky shores. While most of the natural beaches of Lake Garda are quite pebbly, there are still some prize-winning shores to be found. One of the most popular beaches of Lake Garda in Lazise Beach located on the coast south of Lazise. With sandy shores, many areas of the beach are owned by Camping Spiaggia d'Oro (website) and require small fees to gain access. However, there are many parts of the beach that are free admission, though it can get quite crowded during the months from June to August. However, if you want your slice of paradise to be a little less crowded, it may not be a bad idea to venture to Spiaggia Baia del Vento located near San Felice del Benaco. With sand as equally soft as Lazise Beach and minimal crowds, Spiaggia works as a great beach for those that want some tranquility as they sunbathe or swim. Canoes and pedal boats can be rented on the beach, and there is a pizzeria nearby called Baia del Vento, which has reasonably priced food. Soak up the sun at Lake Garda!

Also, if you want to get away from the lake and beaches, get your thrills and chills at Gardaland! Gardaland opened in July 1975 and continues to be the heart of entertainment for many north-eastern Italians as well as general tourists, attracting about three million visitors each year. It's a great thing to do if you're visiting Italy with your kids, too. Though adjacent to Lake Garda, Gardaland does not face this gorgeous lake. However, with so much to do within the park, you will find you hardly notice! Gardaland is a complex of an amusement park, resorts and restaurants, and marine park. With so much to do and Gardaland expanding to an area of 445 meters squared, you will be sure to get your exercise. Ranked fifth in the top ten amusement parks of in the world according to Forbes Magazine and in 2011, the eighth popular amusement park in Europe, Gardaland has a wide variety of attractions, including Mammut, Jungle Rapids, Fuga Da Atlantide, Blue Tornado, Ramses: Il Risveglio, Raptor, and Oblivion: The Black Hole. Tickets for the amusement park run around €25, while tickets for the marine park run about €15. However, be sure to check out Garland's website as they have many different deals you can take advantage of during the seasons. Let your heart race at Gardaland!

If you are looking to get around the many metropolises that surround Lake Garda but do not wish to burden yourself with car rental companies, these cities can easily be reached by bus. Certain cities, like Venice or Milan, use specific travel agencies like regional ATV or Arriva, so be sure to do your research ahead of time. There are also lake ferries found throughout the towns that border on the shores of Lake Garda. Each ferry company's number of services depend on the season, with lesser numbers during the spring and autumn months. From historic paddle steamers to hydrofoils, the prices vary depending on what part of lake you wish to go to with the south of lake being â¬23.40, the north of lake being â¬20.50, and the whole of lake being â¬34.30. Many towns acquire a lakeside path that allows you the opportunity to combine walking with a ferry trip. Have a marvelous time at Lake Garda!