How much does it cost to travel to Basque Country?

How much money will you need for your trip to Basque Country? You should plan to spend around €95 ($99) per day on your vacation in Basque Country, which is the average daily price based on the expenses of other visitors. Past travelers have spent, on average, €30 ($32) on meals for one day and €20 ($21) on local transportation. Also, the average hotel price in Basque Country for a couple is €90 ($94). So, a trip to Basque Country for two people for one week costs on average €1,327 ($1,382). All of these average travel prices have been collected from other travelers to help you plan your own travel budget.

Looking for a hotel in Basque Country? Prices vary by location, date, season, and the level of luxury. See below for options.

How much does it cost to go to Basque Country? Naturally, it depends on the dates. We recommend Kayak because they can find the best deals across all airlines.

The price of renting a car in Basque Country will depends on dates, the type of car, the location, and your age. We recommend Kayak because they can find the best deals across all car rental companies.

Basque Country On a Budget 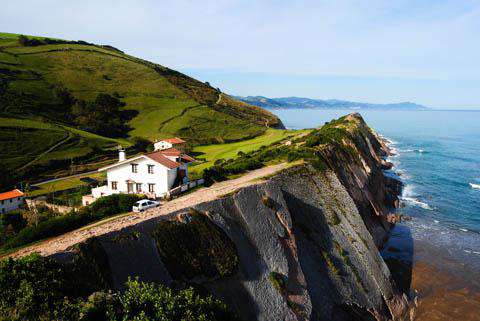 Basque Coastline, Spain
Upon its lush green hills that tower over the deep blue waves of the Atlantic Ocean, you will find its perfected oceanic climate and breathtaking landscape to be only the beginning of Basque Country, Spain. Basque Country, or Euskadi, is an autonomous community located in northern Spain. This community was based off the Statute of Autonomy of the Basque Country, a legal document that enabled Basque people to develop on Spanish territory. Due to its strong traditional currents in Spanish heritage as well as magnificent architecture, Basque Country is a hotspot for tourists everywhere.

La Concha Beach is probably one of the most popular parts for Basque Country. Though a favorite for tourists, the beach is normally not congested as the expanse of shoreline is great. La Concha's geography can be described as none other than gorgeous. Its ocean has been deemed safe to swim in, allowing people of any age to surf, swim, and celebrate. If you are looking to explore the entire coastline, consider learning about the many tours La Concha offers, including the San Sebastian private walking tour and the small-group, half-day tapas tour from Biarritz to San Sebastian.

Deemed one of the most beautiful spots in the country, take a little adventure around the island of San Juan de Gaztelugatxe. Located just off the shore of Bay of Biscay, 35 km east from Bilbao, the island is quite extensive with a church located on its highest point in dedication to John the Baptist. It has even been rumored that John the Baptist stepped foot on the island! The path leading to the island is always open, but it should be warned that it is a bit of a hike, so be sure to bring plenty of water and snacks. Nevertheless, don't let this deter you from viewing the majestic island of San Juan de Gaztelugatxe.

If you are looking to shop, eat, and interact with locals, look no further than Parte Vieja, or the Old Part, of Basque Country. Restaurants, shops, tapas bars, churches, and markets are scattered throughout this town to make it a bustling and hustling one. As well, the Old Part is a key historical aspect of San Sebastian, surrounded by walls until 1863 and divided into two parishes related to the the Santa Maria and San Vicente churches. There are a number of guided tours provided to fully embrace this part of Basque Country, including an evening pintxo tour with wine, bicycle tour, and cooking classes.

If you find yourself growing a bit hungry, feel free to stop at Eneperi for a bite to eat. Established in 1994, the restaurant prides itself on fresh-tasting food from the sea, with its menu including fish, vegetables, and other meats only provided by local producers of Basque Country, as well as quality wines to sniff and sip. Besides the restaurant, Eneperi also offers a pub, brewery, and neat museum where you can gaze and study the ancient utensils used by the inhabitants from Basque country a long time ago.

In order to get around this gorgeous piece of land, intricate bus, metro and train networks have been created among and between the cities, and are well signposted for your convenience. Train stations are relatively easy to navigate around and the cost is minimal. However, if you are looking for a more convenient but expensive way, taxis are always readily available throughout the region in most cities. No matter what method of travel you choose, you will have a blast in Basque Country!