How much does it cost to travel to San Sebastian?

How much money will you need for your trip to San Sebastian? You should plan to spend around €57 ($68) per day on your vacation in San Sebastian, which is the average daily price based on the expenses of other visitors. Past travelers have spent, on average, €20 ($23) on meals for one day and €5.65 ($6.68) on local transportation. Also, the average hotel price in San Sebastian for a couple is €51 ($60). So, a trip to San Sebastian for two people for one week costs on average €803 ($949). All of these average travel prices have been collected from other travelers to help you plan your own travel budget.

How much do vacation rentals cost in San Sebastian? Prices vary by location, date, size of the place, and the level of luxury. See below for options.

What did other people spend on Food in San Sebastian?

Typical prices for Food in San Sebastian are listed below. These actual costs are from real travelers and can give you an idea of the prices in San Sebastian, but your costs will vary based on your travel style.

How much does it cost to go to San Sebastian? Naturally, it depends on the dates. We recommend SkyScanner because they can find the best deals across all airlines.

The price of renting a car in San Sebastian will depends on dates, the type of car, the location, and your age. We recommend SkyScanner because they can find the best deals across all car rental companies.

What did other people spend on Entertainment in San Sebastian?

Typical prices for Entertainment in San Sebastian are listed below. These actual costs are from real travelers and can give you an idea of the prices in San Sebastian, but your costs will vary based on your travel style.

What did other people spend on Water in San Sebastian?

Typical prices for Water in San Sebastian are listed below. These actual costs are from real travelers and can give you an idea of the prices in San Sebastian, but your costs will vary based on your travel style.

San Sebastian On a Budget

San Sebastian, Spain
San Sebasti├Īn is a city in northern Spain very well known for its summertime fun in the sun. While the streets are cool and happening at night, they take on a different charm by day. Beautiful beaches line the city's edge, right next to elegant historic architecture and churches, topping charts as some of the best city beaches in Europe. The food, too, is said to be some of the best with traditional Basque cuisine as well as the popular pintxo (tapas) bites. San Sebasti├Īn is a place of lively culture, teeming with beauty, flavors, and colors.

Being a coastal city, some of San Sebasti├Īn's most beautiful sights are its beaches. La Concha, the city's most popular beach, and Ondarreta, lie in the crescent of the city. Both are nestled upon long stretches of soft sands set against gentle turquoise waters┬Śperfect for a day of sunbathing or swimming. Zurriola Beach is another hot spot popular with the younger crowd, especially for surfing.

Set behind the beaches, the city holds an old world allure of its own, with beautiful architecture and monuments dotted throughout. The heart of San Sebasti├Īn is home to many enchanting churches like Buen Pastor Cathedral and historical gems in the old town like the Basilica of Santa Maria, the San Vicente Church, and the Plaza de la Constitucion, an old bullring converted into a public courtyard to relax and absorb the atmosphere.

Yet still, behind the city and the beaches, San Sebasti├Īn is surrounded by the grand presence of nearby mountains. They stand as a colossal backdrop to the city, but are accessible with many sights and activities to engage in from above. Each mountain has its specialty┬ŚMonte Urgell with a giant statue of Christ and views of the surrounding beaches, Monte Igueldo with its own amusement park, and Monte Ulia with gorgeous views and ruins of the past.

San Sebasti├Īn has four main hubs of activity. The lively Parte Vieja (or old town) lies across the neck of Monte Urgull, the bay's eastern headland, and is where the most popular pintxo bars and cheap lodgings can be found. South of the Parte Vieja is the commercial and shopping district, called the ├ürea Rom├Īntica. This area is laid out in a grid of late-19th-century buildings that extend from behind Playa de la Concha to the banks of R├Ło Urumea. On the east side of the river is the district of Gros, which exists in a more peaceful state away from the busyness on the west side. It has a more relaxed ambience and is home to the surfing beach of Playa de Gros. And finally, at the opposite western end of the city is Playa de Ondarreta, a very high-class district known as a millionaires' belt due to its extravagant holiday homes.

A city of beaches, San Sebasti├Īn has anything you could want in seaside activities. Whether you want to be active with water sports or prefer to relax the day away on the sand, the coastal stretches of the city with glittering waves offer opportunities to satisfy any beach bum for days. And then there are the mountains, full of prospects for hiking, climbing, and exploring. You might come across some old ruins or follow a trail that opens to sweeping views of the coastline. Monte Urgell even has an Aquarium full of marine life and research, while Monte Igueldo houses an amusement park with a roller coaster that looks over beaches, cliffs, and the city itself.

Back down in San Sebasti├Īn, the city is also host to many festivals throughout the year, some of which include dFeria festival of theatre and dance, Heineken Jazz Festival in July with about a hundred concerts, as well as the San Sebasti├Īn International Film Festival in late Septemeber which showcases over 200 international films. Also along the lines of entertainment, the Kursaal, with its translucent crystal structure, has become an icon of the city as the venue for the Film Festival and other concerts ranging from classical to contemporary pop and rock. The Victoria Eugenia Theatre has been another important cultural stage since 1912 and is very popular for musicals and plays throughout the year.

Some of the top museums in the city include the San Telmo Museo which is the oldest displaying history and art of the Basque country, Tabakalera which houses avant-garde and contemporary displays across many media, and the Arteko Gallery which displays the contemporary artwork of young foreign and national artists.

The cuisine of San Sebasti├Īn is highly influenced by Basque country, the name given to the region near the Atlantic border of Spain and France. This kind of food consists of items like meats and fish grilled over hot coals, marmitako and lamb stews, cod, Tolosa bean dishes, paprikas from Lekeitio, Idiazabal sheep's cheese, txakoli sparkling wine, and Basque cider. The most popular in San Sebasti├Īn is pintxos (Basque tapas), which are small plates served hot or cold usually at a bar. Most pintxos cost ┬Ć2-3 and come in a variety of options. Visiting a pintxos bar is an easy way to sample through the flavors of Basque culture. Another interesting specialty of the region is The Kalimotxo┬Śa drink made with 50% wine and 50% Coca-Cola. Most restaurants are located in the Old Town area of the city.

San Sebasti├Īn Airport is the nearest airport, served by Iberia and Vueling airlines to Madrid and Barcelona. The next nearest airports include Biarritz Airport in France and Bilbao Airport┬Śthe most important airport in the Basque Country and northern Spain.

There are two train stations in San Sebasti├Īn: the RENFE station for national and local trains (at the east end of Puente de Maria Cristina), and the Euskotren station for the local network (Plaza Easo). 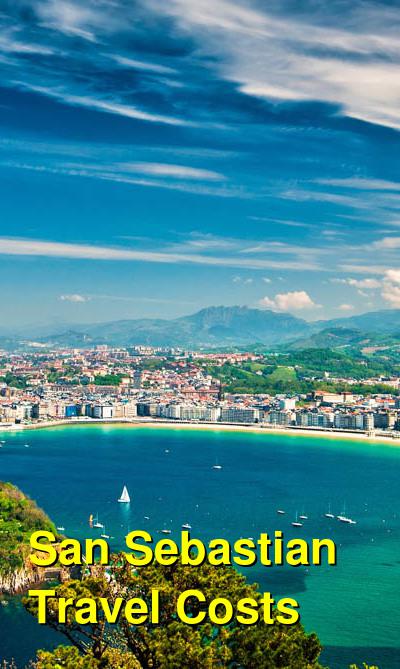