How much does it cost to travel to Vitoria-Gasteiz?

How much money will you need for your trip to Vitoria-Gasteiz? You should plan to spend around €117 ($123) per day on your vacation in Vitoria-Gasteiz, which is the average daily price based on the expenses of other visitors. Past travelers have spent, on average, €41 ($43) on meals for one day and €27 ($29) on local transportation. Also, the average hotel price in Vitoria-Gasteiz for a couple is €111 ($117). So, a trip to Vitoria-Gasteiz for two people for one week costs on average €1,638 ($1,727). All of these average travel prices have been collected from other travelers to help you plan your own travel budget.

How much do vacation rentals cost in Vitoria-Gasteiz? Prices vary by location, date, size of the place, and the level of luxury. See below for options.

How much does it cost to go to Vitoria-Gasteiz? Naturally, it depends on the dates. We recommend Kayak because they can find the best deals across all airlines.

The price of renting a car in Vitoria-Gasteiz will depends on dates, the type of car, the location, and your age. We recommend Kayak because they can find the best deals across all car rental companies.

Vitoria-Gasteiz On a Budget 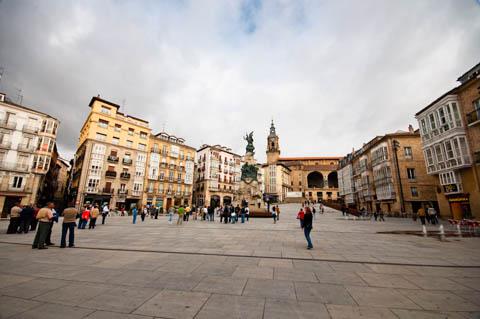 Vitoria-Gasteiz, Spain
In the midst of a vast, starry night, medieval cathedrals and ancient buildings are scattered with light across the humming city. This is none other than Vitoria-Gasteiz, a town located in the province of Araba/Alava in northern Spain. Within its border, this city contains Basque Country's House of Parliament, the headquarters of the Government, and the Lehendakari's (Prime Minister's) official residence. In 2012, Vitoria-Gasteiz was awarded the title of European Green Capital and now is one of the top five places to live in Spain. This multicultural city is chock full of amazing national history as well as unique cultural traditions. Vitoria-Gasteiz is also well known for its festivals, including Azkena rock festival, FesTVal, Vitoria-Gasteiz jazz festival, and the Virgen Blanca Festivities. Whether you seek to explore its world-renowned wineries or dine in a chic restaurant, Vitoria-Gasteiz holds an endless amount of possibilities.

Easily one of the top sights in Vitoria-Gasteiz, the majestic Cathedral of Santa Maria rises out of its historic district. Built in the late 13th century and all throughout the 14th century, this Gothic-style cathedral has some of the most awe-inspiring architecture in the city. Travelers from all around the world seek to gaze at its artistic beauty, with monumental sculptures divided into three portals. The cathedral has now been transformed into a museum for all to explore, with its opening hours being from 11am - 2pm and 5pm - 8pm. If you are interested in a guided tour, feel free to stop and get more information at the Visitors Reception Centre.

However, an amazing region that has been eagerly cultivated within Vitoria-Gasteiz is the Plaza de la Virgen Blanca, one of the oldest meeting points in the country. During the Middle Ages, the Plaza de la Virgen Blanca was Vitoria-Gasteiz's city center, where all activities and events took place, including bullfights and food markets. This bustling characteristic still holds true today as the center is adorned with cafes, restaurants, and shops welcome to all tourists. After you finish eating and shopping, take a walk around the Plaza as it is known by many tourists as simply gorgeous, especially due to the central monument that commemorates La batalla de Vitoria of 1813 during the Napoleonic Wars.

If there is one thing you simply must do before you leave, it is to take advantage of the plethora of top-rate wineries scattered throughout Vitoria-Gasteiz. Travel to the Rioja via the BalcÃ³n de la Rioja to get a fantastic panoramic view of the lush wineries Spain is so thankful for. As well, Laguardia, a walled village that has retained its medieval characteristics, is also a great stop as they allow their tourists to take advantage of the nearly 300 underground wine cellars of the town. However, if you want to gain a more historic background on the history of wine in Vitoria-Gasteiz, check out the Villa LucÃ­a Wine Centre, where tourists can learn about the wine culture and production methods in Rioja Alavesa.

From all the activity, you are sure to work up an appetite! Relax and dine at Zaldiaran Restaurant, a high-class eatery for locals and travelers. The restaurant is designed in the utmost modern styles, creating a sleek, chic environment for its customers. Zaldiaran specializes in the cuisine of Basque Country, with such dishes as mezzaluna wonton with truffled pasta carbonara and mushrooms or crujiente mushroom with bouquet of herbs and shavings of jabugo. Nevertheless, with a top restaurant like Zaldiaran, keep in mind that you will be paying top price!

Once you are in Vitoria-Gasteiz, most destinations are reachable by foot. However, if you are looking to travel the full extent of the town, alternative traveling methods are welcomed as well! A rental car is not a bad alternative, especially if you are looking to travel to regions like San Juan de Gaztelugatxe that are not easily walkable. If you do rent a car, try to not stay on the highway the whole time in order to enjoy the marvelous Basque countryside!

Nevertheless, if you are looking for a cheaper alternative, Vitoria-Gasteiz offers public transportation as well. Vitoria-Gasteiz's bus station is located in the Euskaltzaindia Square, next to the Basque government buildings. Bus routes include but are not limited to Bilbao, Pamplona, San Sebastian, Madrid, and Barcelona. If you are looking to get somewhere by train, the station is located at the end of the Eduardo Dato street. There are many train routes to places like Madrid as well as further stops in France and Portugal. Everything is in reachable distance when you are in Vitoria-Gasteiz, Spain!