How much does it cost to travel to Segovia?

How much money will you need for your trip to Segovia? You should plan to spend around €116 ($126) per day on your vacation in Segovia, which is the average daily price based on the expenses of other visitors. Past travelers have spent, on average, €39 ($42) on meals for one day and €19 ($21) on local transportation. Also, the average hotel price in Segovia for a couple is €120 ($131). So, a trip to Segovia for two people for one week costs on average €1,627 ($1,769). All of these average travel prices have been collected from other travelers to help you plan your own travel budget.

A vacation to Segovia for one week usually costs around €814 for one person. So, a trip to Segovia for two people costs around €1,627 for one week. A trip for two weeks for two people costs €3,254 in Segovia. If you're traveling as a family of three or four people, the price person often goes down because kid's tickets are cheaper and hotel rooms can be shared. If you travel slower over a longer period of time then your daily budget will also go down. Two people traveling together for one month in Segovia can often have a lower daily budget per person than one person traveling alone for one week.


How expensive is Segovia? How much money do I need for Segovia?

How much does a trip to Segovia cost? Is Segovia expensive? The average Segovia trip cost is broken down by category here. All of these Segovia prices are calculated from the budgets of real travelers.

Looking for a hotel in Segovia? Prices vary by location, date, season, and the level of luxury. See below for options.

How much does it cost to go to Segovia? Naturally, it depends on the dates. We recommend Kayak because they can find the best deals across all airlines.

The price of renting a car in Segovia will depends on dates, the type of car, the location, and your age. We recommend Kayak because they can find the best deals across all car rental companies.

Segovia On a Budget 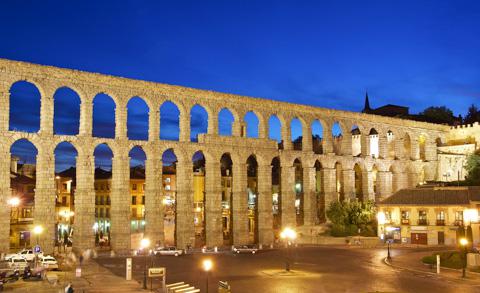 Segovia, Spain
Segovia is a historic town of Spain, predating the Roman Empire to a time of Celtic possession. The town is also capital of a province of the same name, and was declared an UNESCO World Heritage Site in 1985 for its multitude of historic structures, including a Roman aqueduct, Gothic cathedral, and royal palace.

As far as historical and architectural importance go, Segovia's aqueduct, palace, and cathedral are the big three attractions. However, visitors will find plenty of other things to do in Segovia, too. The aqueduct, which is 28 meters at its highest point, was built by the Romans in the 1st century to supply water to the Roman military fort on the hill. This fort lies at the foundations of what is now the Alcazar of Segovia - or the royal palace. The fort has crumbled to ruins and is overshadowed by the castle, which is unique in shape-resembling the bow of a ship-and complete with two courtyards, two towers, and a keep. Alcazar was a favorite residence for royalty, such as Alfonso X the Wise and Henry IV, and today houses the General Military Archives of Segovia and a museum of the Royal School of Artillery.

The Segovia Cathedral, which began construction in the mid-16th century, is renowned as the last Gothic cathedral to be built in Spain. Featuring three tall vaults, an ambulatory, fine tracery windows, and numerous stained glass windows, the cathedral is considered a masterpiece of Basque-Castilian Gothic architecture and is known as "The Lady of Cathedrals." Other works of architecture worth noting include the Casa de los Picos or "The House of the Points," whose unique facade dates to the Renaissance, as well as the Royal Palace of La Granja de San Ildefonso, an 18th century summer palace located just outside of the city. Be sure to also take note of the medieval walls of Segovia that enclose the Old Town.

Segovia's historic center lies within the Old Town, which is enclosed by fortress walls. Alfonso VI of Leon and Castile had the walls enlarged and extended in the 11th century, though they existed from Roman times. While there were originally five gates, today the walls of Segovia have three gates still preserved: San Cebrian, Santiago, and San Andres. For exploring the Old Town, Azoguejo Square is a great place to start. A trading spot in Roman times, it is at this square where the aqueduct reaches its highest point of 28 meters. The charming old buildings of the market square are also host to plenty of cafes, eateries, shops, and hotels. Plaza Mayor is another central meeting place, located right at the base of Segovia's cathedral. It is situated closer to the Old Town center and is also near restaurants, hotels, shops, and other amenities.

Most of the locations for sightseeing are in the old part of the city, which is easily navigable on foot. One of the best ways to experience Segovia is to walk and sightsee at your own pace. Spend some time in the public squares, soak up the culture, and embark on a historical journey within medieval walls, through Gothic churches, and beneath Roman aqueducts. There are also plenty of exhibition spaces that are great for learning about the art, history, and culture of the area. The Museum of Segovia, for example, is just one of many-containing artifacts, models, and art related to the history, culture, and lifestyle of the city and surrounding region.

For those looking to enjoy the outdoors, Segovia also has a number of gardens worth visiting. One of the oldest gardens is the Paseo del Salon, created in 1786. Perhaps the most historic are the Alcazar Gardens, which were originally created on the occasion of the marriage of Philip II to Anne of Austria in 1570, though they were not complete until the 18th and 19th centuries. One of the most beautiful, however, is the Garden of la Merced, which was the first city-planned public garden within city walls.

Traditional cuisine in Segovia largely centers on oven roasted meats as the main dish. These include meats like "cochinillo" or roasted suckling pig, "cordero" or roasted lamb, and veal or beef. Other common meals include a variety of soups and stews, including Castilian garlic soup, La Granja bean stew, and a myriad of game stews. Sausage and some fishes can be found in dishes as well, while tapas are popular throughout Spain and can include any variety of ingredients in appetizer-sized portions. Tapas are often accompanied with drinks, and there are plenty of local wines to sample in Segovia. Desserts include things like ponche segoviano (a cinnamon cake soaked in sweet liqueur), a pastry known as florones, rice pudding, and a sweet crispy pastry called fijuelas.

Segovia is located about 50 miles northwest of Madrid, where most international visitors choose to fly in. Adolfo Suarez Madrid–Barajas Airport in Madrid is the nearest major airport to Segovia. From Madrid, Segovia is about one hour away by bus, two hours by the Cercanias Madrid commuter train, or thirty minutes by AVE (Alta Velocidad Espanola) high speed train.