How much does it cost to travel to Toledo?

How much money will you need for your trip to Toledo? You should plan to spend around €64 ($78) per day on your vacation in Toledo, which is the average daily price based on the expenses of other visitors. Past travelers have spent, on average, €21 ($26) on meals for one day and €8.00 ($9.70) on local transportation. Also, the average hotel price in Toledo for a couple is €73 ($88). So, a trip to Toledo for two people for one week costs on average €898 ($1,088). All of these average travel prices have been collected from other travelers to help you plan your own travel budget.

A vacation to Toledo for one week usually costs around €449 for one person. So, a trip to Toledo for two people costs around €898 for one week. A trip for two weeks for two people costs €1,795 in Toledo. If you're traveling as a family of three or four people, the price person often goes down because kid's tickets are cheaper and hotel rooms can be shared. If you travel slower over a longer period of time then your daily budget will also go down. Two people traveling together for one month in Toledo can often have a lower daily budget per person than one person traveling alone for one week.


How expensive is Toledo? How much money do I need for Toledo?

How much does a trip to Toledo cost? Is Toledo expensive? The average Toledo trip cost is broken down by category here. All of these Toledo prices are calculated from the budgets of real travelers.

Find a hostel, guesthouse, or B&B in Toledo

What did other people spend on Food in Toledo?

Typical prices for Food in Toledo are listed below. These actual costs are from real travelers and can give you an idea of the prices in Toledo, but your costs will vary based on your travel style.

How much does it cost to go to Toledo? Naturally, it depends on the dates. We recommend SkyScanner because they can find the best deals across all airlines.

The price of renting a car in Toledo will depends on dates, the type of car, the location, and your age. We recommend SkyScanner because they can find the best deals across all car rental companies.

What did other people spend on Water in Toledo?

Typical prices for Water in Toledo are listed below. These actual costs are from real travelers and can give you an idea of the prices in Toledo, but your costs will vary based on your travel style.

Toledo On a Budget 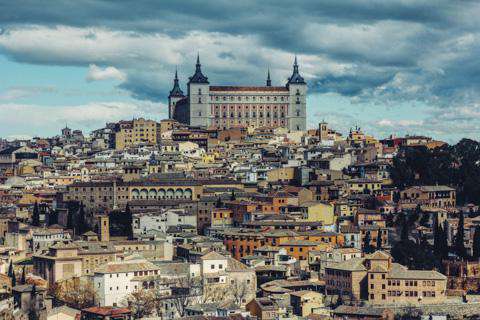 Toledo, Spain
Set upon a hill above the plains of Castilla-La Mancha in central Spain lies the ancient city of Toledo. Its intricate architecture is only enriched by its profound historical background, spurring tourists from all over the world to gaze at and study the story of Toledo. It has been given many names throughout its history, including the "Imperial City" for being the main venue for Charles V, Holy Roman Empire, as well as the "City of the Three Cultures" for its historical co-existence of Christians, Muslims, and Jews. In 1986, UNESCO named Toledo a World Heritage Site due to the plethora of extensive cultural and monumental heritages. You will find that though an old city, it is just buzzing to life with things to do and places to see!

With its magnificence rivaling that of Notre Dame, Catedral Primada, or the Holy Cathedral Church, was built in 1227 under the leadership of Archbishop D. Rodrigo Jimenez de Rada and was consecrated to the Virgin Mary. The architecture has both Gothic and French influences, with the Cathedral measuring to be 120 m long by 60 m wide. Composed of 5 naves, supported by 88 columns and 72 vaults, the Cathedral stands as one of Toledo's most popular points of interest. A complete visit includes the Primate Temple, museums, Chapel of Kings, Cloister, Bayeu Paintings, San Blas Chapel and the Tower of Bells for no more than 12,50 . However, if you are looking for a shorter, less expensive tour, the Cathedral offers tours of the museums for 10 , with audio and group tours given upon prior notice.

If you are looking to kick back and relax while viewing the grandeur of Toledo, hop on and hop off one of the many tourist buses offered and catch a glimpse of the panoramic view of the Spanish city from Mirador del Valle. What's more, through these guided train tours, you experience the full beauty of Toledo, while understanding the historical backgrounds that coincide with its dazzling cathedrals, monuments, and streets. These tours even allow its fellow travelers to gain stops to some pretty neat commercial shops for any need you may acquire.

However, though Toledo may be a feast for your eyes, you may find yourself getting a bit hungry amidst all this action. If you are looking for a high-class dining affair, Restaurante Adolfo will suit you nicely. Founder Adolfo Muñoz, has traveled to over 30 countries, making his cooking both diverse and multicultural. Though specializing in Mediterranean and Spanish cuisine, Restaurante Adolfo has a menu that is so distinctive that your jaw will drop at the seemingly endless possibilities. With Restaurante Adolfo awarded the National Food Prize by Spain's Ministry of Agriculture, Fisheries and Food, the price is worth paying at Adolfo's!

If you are looking for a restaurant that offers more than just lunch and dinner, La Abadia may be able to oblige. Established in the sixteenth century by the Casa de Oficios, its original architecture of caves and cisterns remains intact to fit beautifully with the rest of the majestic landscape of Toledo. Unlike Restaurante Adolfo, La Abadia is far more affordable, providing all types of meals including brunch and after-hours. Just like most of the restaurants in Spain, La Abadia also specializes in Mediterranean and Spanish dining and have perfected it to a T.

Besides hop-on-hop-off tour buses, there are a variety of options to use in order to get around Toledo. If you are looking to get to other destinations in Spain like Madrid, it may be easiest and cheapest to use the train. Consider buying your tickets online or from a travel agent as the train station is quite difficult to maneuver around. The train station is a mile from the old town' of Toledo and is reasonably priced.

However, if you are looking to navigate within Toledo and do not want to use a bus, a taxi is a wonderful alternative. Advertised as 4.50  in the old town, it is even possible to negotiate for cheaper prices with your given taxi driver. There is but little traffic within the city, so you should be able to get around just fine. This is but one of the many amazing things about Toledo!

By Burdein in Food
'''Restaurante Apotheca''' In Callejón del Lucio 3 nearly Zocodover and Alcázar. The food is excellent and is nicely presented.

You can feel they love what they are doing and they are making an effort.