How much does it cost to travel to Fuerteventura Island?

Looking for a hotel in Fuerteventura Island? Prices vary by location, date, season, and the level of luxury. See below for options.

How much does it cost to go to Fuerteventura Island? Naturally, it depends on the dates. We recommend Kayak because they can find the best deals across all airlines.

The price of renting a car in Fuerteventura Island will depends on dates, the type of car, the location, and your age. We recommend Kayak because they can find the best deals across all car rental companies.

Fuerteventura Island On a Budget 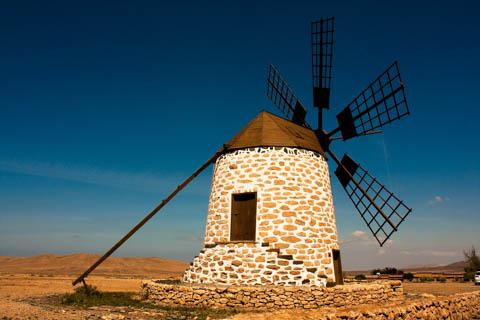 Fuerteventura Island, Canary Islands, Spain
Fuerteventura is a volcanic island, and the second largest of Spain's Canary Islands located off the northern coast of Africa. Roughly translating as "Strong Winds" or "Strong Venture," the island is best known for activities like wind surfing and kite surfing.

Some popular sights of Fuerteventura include Corralejo and El Jable to the north, which are made up of sand dunes while the south is filled with long beaches and remote bays. The constant winds blowing onto the beaches provide the ideal destination for all kinds of surfing. Windsurfing is common around Corralejo and Playas de Sotavento, wave sailing (windsurfing on the waves) on the coast along the northern half of the island, and regular surfing on the west and north coast where there are large waves. El Cotillo is a small fishing village in the north-west of the Island with very long beach to the south of the village and a few calm beaches to the north. These northern beaches are popular with snorkelers and sunbathers.

The island also has a few museums which include The Antigua Windmill Craft Centre, The Salt Museum, and The Atalayita Archeological Interpretation Centre as well as a sculpture park in the capital, Puerto del Rosario. It is an open-air park consisting of around 100 sculptures crafted by local artists.

Isla de los Lobos, or Lobos Island, is another interesting sight-a nature reserve that has been without permanent human population since 1982. It is accessible to tourists via ferry from Corralejo Harbor, and features an old lighthouse, wildlife, walking trails, and beautiful views. The ferry ride is very short and it only takes about 2-3 hours to walk the island.

Corralejo is a beach-town on the northern tip of Fuerteventura known for its vacation resorts, beaches, and strong winds (as with the rest of the island). This town has access to some of the most beautiful beaches on the island, including the award winning Sand Dunes National Park which has a long stretch of pristine white sand and turquoise waters. The town itself has four beaches, some of which have easy access to cafes and restaurants. Downtown Corralejo is host to a number of souvenir shops, as well as a small market area with grocery stores, pharmacies, and other amenities catering to visitors. The big shopping center, El Campanero, has plenty to offer as well including a Canarian market every Sunday. Puerto del Rosario is the capital of Fuerteventura, located in the eastern part of the island, while a number of smaller towns and villages make up the rest of the island.

The Canary Islands, Fuerteventura included, are sometimes considered to be the "Hawaii of the Atlantic." The constant winds make for great surf for watersports of all kinds. Surfing of course is popular as is wind and kite surfing. Rental stands are scattered throughout the island, most of which will provide private or group lessons.

Snorkeling and scuba diving are common in the calmer waters of the area. A number of companies offer trips out to local dive sites, like the clear waters of Lobos Island mentioned above.

The spectacular scenery of beaches and volcanoes also makes a great backdrop for yoga.

Like the rest of the Canary Islands, the cuisine of Fuerteventura is fairly basic due to the customs and climate conditions. With the water close at hand, fresh fish and seafood is very common along with whatever is able to be grown on land. Dishes can be prepared in a variety of ways and are usually accompanied by a hot pepper sauce called mojo made mainly of oil, garlic, vinegar, salt, red pepper, thyme, oregano, coriander, and several other spices. There are two varieties of mojo: rojo (or red, often served with meat) and verde (or green, often served with fish). Beef and pork make up some other dishes, though goat is probably the more common meat. Goat's milk is also used to make a kind of local cheese called majorero.

Fuerteventura Airport, also known as El Matorral Airport, is the main airport serving the island, located about 5 kilometers southwest of the capital city Puerto del Rosario. Flights are available to and from international destinations, though mainly Spain, Europe, and the neighboring islands.

Once arrived at the airport, there are bus lines from Puerto del Rosalio (via airport) to Correlejo, Caleta de Fuste, Morro del Jable, and Cotillo that are all cheap and reliable. Visitors also have the option to hire or rent cars.

There are also several ferries that run from Tenerife, Gran Canaria, Puerto del Rosario, and Lanzarote.