How much does it cost to travel to Girona?

How much money will you need for your trip to Girona? You should plan to spend around €112 ($122) per day on your vacation in Girona, which is the average daily price based on the expenses of other visitors. Past travelers have spent, on average, €33 ($35) on meals for one day and €39 ($42) on local transportation. Also, the average hotel price in Girona for a couple is €110 ($120). So, a trip to Girona for two people for one week costs on average €1,569 ($1,706). All of these average travel prices have been collected from other travelers to help you plan your own travel budget.

A vacation to Girona for one week usually costs around €785 for one person. So, a trip to Girona for two people costs around €1,569 for one week. A trip for two weeks for two people costs €3,138 in Girona. If you're traveling as a family of three or four people, the price person often goes down because kid's tickets are cheaper and hotel rooms can be shared. If you travel slower over a longer period of time then your daily budget will also go down. Two people traveling together for one month in Girona can often have a lower daily budget per person than one person traveling alone for one week.


How expensive is Girona? How much money do I need for Girona?

How much does a trip to Girona cost? Is Girona expensive? The average Girona trip cost is broken down by category here. All of these Girona prices are calculated from the budgets of real travelers.

Looking for a hotel in Girona? Prices vary by location, date, season, and the level of luxury. See below for options.

How much does it cost to go to Girona? Naturally, it depends on the dates. We recommend Kayak because they can find the best deals across all airlines.

The price of renting a car in Girona will depends on dates, the type of car, the location, and your age. We recommend Kayak because they can find the best deals across all car rental companies.

Girona On a Budget 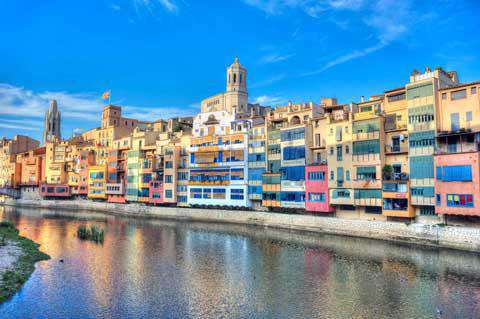 Girona, Catalonia, Spain
Girona is an ancient town in northeastern Spain, and serves as the capital of the province of the same name in Spain's Catalonia region. It is characterized by narrow medieval alleys, architecture, and an impressive wall that once served to fortify the city.

Aside from the extensive medieval wall, another major Girona landmark is the Cathedral at the north end of the wall and old town. The Roman Catholic Girona Cathedral, also known as the Cathedral of Saint Mary of Girona, is best known for having the widest Gothic nave in the world. Its construction began in the 11th century and features Romanesque, Gothic, and Baroque styles. Other important churches in Girona include Esglesia de Sant Feliu, which dates to the early days of Christianity, and Sant Pere de Galligants, which is now home to the Catalan Museum of Archaeology. Other museums include the Cinema Museum, Girona Art Museum, and the Jewish History Museum.

Additional sights of note include Romanesque public baths at Banys Ãrabs, the beautiful gardens of Temps de Flors (usually open in May), and the beauty of yellow ochre buildings and red-tiled roofs that can be seen by wandering the city on foot.

Girona has an ancient past as a medieval walled city, situated along the banks of the River Onyar. Its compact historic center is easy to see on foot, with many narrow, winding alleys concentrated around the river. Placa Catalunya sits on the river as if an island, marking the center of the city, with the old town to the east of the river and the new town largely situated on the west side. This main square is also near the Tourist Information Office where visitors can acquire a map of the city. While the old town is best for historical appeal and sightseeing, the new town is also attractive with plenty of shops and boutiques. The street that runs parallel with the river on the old town side is called Rambla de la Llibertat and is a great hub for cafes and bars, especially in the evenings. Following this road to the north end of the old town, visitors will find the Placa dels Apostles and the Girona Cathedral. The Passeig Arqueologic is another path worth exploring on the eastern edge of old town.

The best activity when visiting Girona is to explore its medieval labyrinth of narrow streets on foot, stopping and admiring landmarks along the way. Views from above the alleys can also be had from the Passeig Arqueologic, which offers an opportunity to experience Girona's impressive medieval walls. The most popular access point is opposite the Banys Ãrabs at the north end of the old town, where steps lead up into beautiful gardens. The path then continues to the south end of the city, ending near the Placa Catalunya. Along the wall, some of the best views can be seen from the Tower of Sant Domenec.

Food in Girona largely follows the Catalan traditions of northeastern Spain. It is categorized as Western Mediterranean cuisine, and implements ingredients such as tomato, garlic, eggplant, artichoke, and other fresh vegetables, as well as mushrooms, legumes, bread, pasta, olive oils, all kinds of cheese, and wines. Inland (as is the case with Girona), pork is the staple meat product, while fish such as sardine, anchovy, tuna, and cod are specialties for coastal Catalonia. There are many stews, including escudella (characterized by the use of a large meatball called a pilota, as well as celery, carrots, cabbage, other vegetables, and sometimes additional meat) which dates back to the 14th century, as well as ollada which is a thicker, casserole-type stew made with meat and vegetables. Botifarra, or pork and bean sausage, is also very central to Catalan cooking, while allioli is a common sauce made of garlic and olive oil to coat grilled meats or vegetables.

There are also a number of Catalan wine-growing regions, which makes Girona a great home base for sampling vintages. And finally, there are the desserts. Throughout the region visitors will find crema catalana, the famous yellow cream made with egg yolk, milk and sugar. A Girona specialty, however, are xuixos-fried pastries stuffed with crema catalane and coated with sugar. Girona itself has been put on the map by culinary achievement. Be sure to visit El Celler de Can Roca, a restaurant that was voted the best in the world by Restaurant magazine for multiple years.

The area is served by Girona Airport, which is located about 20 kilometers south of the city. A bus between Girona and the airport is about a 30-minute journey.

There are also long-distance buses that connect Girona with several cities in Spain and France. Barcelona is the nearest major Spanish city, and so many buses travel to and from here.

Trains is another way to navigate between European cities. Direct trains run from Paris to Barcelona on a high-speed line. From there, travelers can take one of the trains directly to Girona, which depart about every hour.