How much does it cost to travel to Bristol?

How much money will you need for your trip to Bristol? You should plan to spend around £73 ($88) per day on your vacation in Bristol, which is the average daily price based on the expenses of other visitors. Past travelers have spent, on average, £26 ($31) on meals for one day and £10 ($12) on local transportation. Also, the average hotel price in Bristol for a couple is £78 ($95). So, a trip to Bristol for two people for one week costs on average £1,018 ($1,231). All of these average travel prices have been collected from other travelers to help you plan your own travel budget.

A vacation to Bristol for one week usually costs around £509 for one person. So, a trip to Bristol for two people costs around £1,018 for one week. A trip for two weeks for two people costs £2,037 in Bristol. If you're traveling as a family of three or four people, the price person often goes down because kid's tickets are cheaper and hotel rooms can be shared. If you travel slower over a longer period of time then your daily budget will also go down. Two people traveling together for one month in Bristol can often have a lower daily budget per person than one person traveling alone for one week.


How expensive is Bristol? How much money do I need for Bristol?

How much does a trip to Bristol cost? Is Bristol expensive? The average Bristol trip cost is broken down by category here. All of these Bristol prices are calculated from the budgets of real travelers.

Looking for a hotel in Bristol? Prices vary by location, date, season, and the level of luxury. See below for options.

How much does it cost to go to Bristol? Naturally, it depends on the dates. We recommend Kayak because they can find the best deals across all airlines.

The price of renting a car in Bristol will depends on dates, the type of car, the location, and your age. We recommend Kayak because they can find the best deals across all car rental companies.

Bristol On a Budget 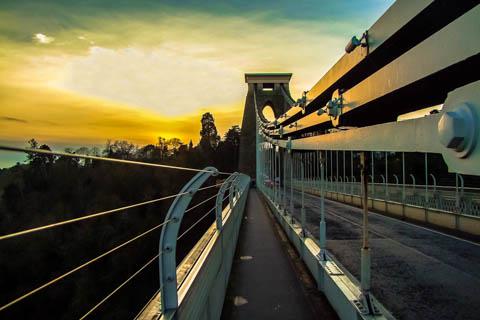 Bristol, England
A city rich in maritime history, Bristol is the unofficial capital of the West Country of England. The city also has some wonderful sights and festivals and it currently rates fourth for travel destinations in England. Most of the city's important festivals take place during the summer months so that is easily the best time of year to visit the area. In addition to the many sights within the city, Bristol also makes a great base for exploring the West Country. There is plenty of affordable accommodation and a large selection of restaurants and bars. It also lacks many of the touristy gimmicks of more popular nearby towns. The live music scene has also been on the rise in recent years. The young population is traveling to Bristol in growing numbers because of the influences of many popular bands that have performed in the area. As recently as 2010, Bristol was voted as Britain's most musical city.

Because of its southern location, Bristol is one of the warmest cities in the United Kingdom. The average annual temperature is about 11 degrees Celsius. Rain is spread out fairly evenly throughout the year and the city has more sunshine than most places in the country. In general, temperatures stay above freezing, even during the winter months, but there are occasional cold spells that have frosts. Snow is uncommon but possible. Summers are usually drier and warm with a reasonable amount of sunshine. Summer and fall are highly variable in temperature.

There are some great sights worth visiting in Bristol. Make sure you don't miss the Blue Reef Aquarium & IMAX 3D Cinema, the Bristol Zoo Gardens, the Clifton Suspenson Bridge, the Bristol Museum and Art Gallery, and Clifton Downs and Observatory. Also allow yourself time to do a Pirate Walk, which takes you on a one hour guided tour of Bristol's historic harbor area.

Bristol is a city of neighborhoods and each neighborhood has it's own character. Some of the more appealing areas to visit as a tourist include the Harbourside area, the downtown area, the Old City, the West End, Clifton, and Eastside. Harbourside is where you'll find the floating harbour. This is a must-see part of the city and where you'll find many of the most interesting attractions. The Old City is just a short walk from the shopping district of Broadmead. This is where the town originated and today it has many old buildings and interesting alleys. The West End has the Bristol Museum and Art Gallery and Red Lodge. Clifton is a high end suburb that has much of the city's student population. Eastside is a multicultural area that has wonderful diversity and interesting character.

There are plenty of bars and restaurants to choose from in Bristol. You'll find most of them concentrated in the Harbourside and West End areas. In West End, most restaurants are along Park Street and Whiteladies Road. There are also some budget food stalls along St Nicholas Market which are well recommended, particularly if you're traveling on a tight budget.

It's relatively easy to walk around most of the central locations in Bristol including the Harbourside and the Old City areas. There are some pedestrian streets and interesting walking routes that you can take. It's about a fifteen minute walk to the main train station of Bristol Temple Meads from the city center. If you're not up for the walk then there is a bus that runs the route.

There are many different bike paths around town and the city is home to Sustrans, that manages the National Cycle Network, so you can easily find information at the info center on College Green, next to the Marriott. The Bristol and Bath Railway Path is part of National Cycle Route 4 and travels for 14 miles off road from St Philips through the eastern suburbs of the city and all the way to the western suburbs of Bath. From there you can pick up the NCR4 to Bath city center. The route goes through the beautiful South Gloucestershire countryside, making it a popular option.

There are tourist bus tours that are available throughout the city that take you to the major tourist attractions. In general, the public buses are not that reliable, but bus 8 and bus 9 and probably the most helpful for visitors. They follow a route that travels from Temple Meads station to Clifton and go by Broadmead, the city center and the West End.

A unique and fun way to see the city is by boat. The Bristol Ferry Boat has several ferries that travel around the harbour and stop at several quays. There's also a commuter service between the city center and the main rail station. Private boat tours are available as well.