How much does it cost to travel to Manchester?

How much money will you need for your trip to Manchester? You should plan to spend around £147 ($178) per day on your vacation in Manchester, which is the average daily price based on the expenses of other visitors. Past travelers have spent, on average, £44 ($54) on meals for one day and £15 ($18) on local transportation. Also, the average hotel price in Manchester for a couple is £113 ($137). So, a trip to Manchester for two people for one week costs on average £2,056 ($2,486). All of these average travel prices have been collected from other travelers to help you plan your own travel budget.

A vacation to Manchester for one week usually costs around £1,028 for one person. So, a trip to Manchester for two people costs around £2,056 for one week. A trip for two weeks for two people costs £4,112 in Manchester. If you're traveling as a family of three or four people, the price person often goes down because kid's tickets are cheaper and hotel rooms can be shared. If you travel slower over a longer period of time then your daily budget will also go down. Two people traveling together for one month in Manchester can often have a lower daily budget per person than one person traveling alone for one week.


How expensive is Manchester? How much money do I need for Manchester?

How much does a trip to Manchester cost? Is Manchester expensive? The average Manchester trip cost is broken down by category here. All of these Manchester prices are calculated from the budgets of real travelers.

Looking for a hotel in Manchester? Prices vary by location, date, season, and the level of luxury. See below for options.

What did other people spend on Hotels in Manchester?

Typical prices for Accommodation in Manchester are listed below. These actual costs are from real travelers and can give you an idea of the prices in Manchester, but your costs will vary based on your travel style.

How much does it cost to go to Manchester? Naturally, it depends on the dates. We recommend Kayak because they can find the best deals across all airlines.

The price of renting a car in Manchester will depends on dates, the type of car, the location, and your age. We recommend Kayak because they can find the best deals across all car rental companies.

What did other people spend on Transportation in Manchester?

Typical prices for Transportation in Manchester are listed below. These actual costs are from real travelers and can give you an idea of the prices in Manchester, but your costs will vary based on your travel style.

Manchester On a Budget 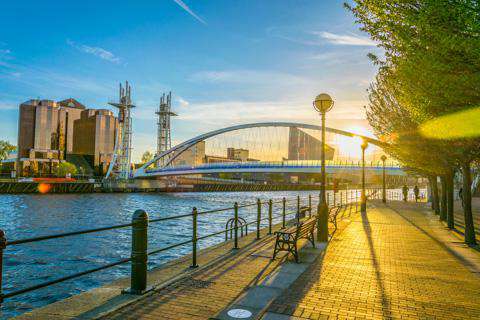 Manchester, England
Located in the heart of Northern England, Manchester is the unofficial Capital of the North. Though it dates back as a Roman city, the city boomed in growth during the Industrial Revolution in textiles, and is today one of the most-visited cities in England by overseas travelers.

Historically, Manchester dates back to the ancient Roman settlement of Mamucium. The area of this settlement is today known as Castlefield, which still features architectural remnants from the 16th century. Other highlights of this area include its central location in Manchester's canal network, greenery and wildlife at the Urban Heritage Park, and its important role in industrial times, which is showcased at the Museum of Science and Industry.

Landmarks in architecture and history include sights like the University of Manchester, Manchester Cathedral, Manchester Town Hall, St. Ann's Church, and John Ryland's Library, which is home to the earliest known fragment of the New Testament. Known as the "Manchester Fragment," it is a part of St. John’s gospel found near Alexandria, and dates from the first half of the second century, not long after the gospel was first written.

As far as culture, art, and historical learning go, some of Manchester's best museums and galleries include the Museum of Science and Industry, Imperial War Museum North, Manchester Museum, Home, Manchester Art Gallery, and the People’s History Museum, amongst others.

For sports enthusiasts, Old Trafford is the stadium that is home to the Lancashire County Cricket Club and the Manchester United Football Club.

Manchester is generally divided into seven districts, which are further broken down into neighborhoods. East Central, North Central, and West Central make up the very heart of the city, and are surrounded by the remaining districts-North, South, University Corridor, and Salford and the Western Districts.

West Central: Castlefield (site of the original Roman settlement Mamucium and has been known as Castlefield since Medieval times), and Peter’s Fields (also known as the Exhibition Quarter, with concert halls and exhibition centers).

Visitors can explore the sights of central Manchester easily on foot, either at their own pace or on planned tours for a more guided experience. You might be interested in acquiring a tourist discount card known as the Manchester Card to save money on tours and the city's main attractions. There is plenty to see and do throughout the city from art galleries, historic and cultural museums, and architectural landmarks, to shopping, dining, and theatre entertainment.

Like any metropolitan hub, Manchester has a rich and varied dining scene. Traditional fare of England consists of anything you might find in a British pub-fish and chips, bangers and mash (sausages and mashed potatoes), stews, soups, and just about any kind of meat pie you could ask for. A few additional specialties include black pudding (black sausage), Manchester caviar (mushy peas), a carbonated beverage called Vimto, the Manchester egg (a pickled egg coated in black pudding and sausage meat, wrapped in panko breadcrumbs, and deep-fried until golden-brown), a pastry known as the Manchester tart, and the Lancashire hotpot made with lamb or mutton and onions and topped with sliced potatoes. With England's imperial history, curry is also a very popular specialty in many British cities, including Manchester-the Curry Mile, for example, features an 800 meter-long stretch of curry restaurants and other Indian goods. English pubs can be found just about everywhere, as well as kebab and pizza shops, but there are also plenty of restaurants serving Asian, Indian, Italian, American, and more.

The city is served by Manchester Airport, located at the southern end of Manchester. It is the largest airport in the United Kingdom outside of London and is listed amongst the 50 largest airports in the world. Destinations include hundreds of locations worldwide, including most major cities in Europe, along with services from the Americas, Africa, and Asia. A full list can be found on Manchester Airport's website.