Travel Budget for Newcastle upon Tyne

How much does it cost to travel to Newcastle upon Tyne?

Accommodation Budget in Newcastle upon Tyne

Find a hostel, guesthouse, or B&B in Newcastle upon Tyne

What did other people spend on Hotels in Newcastle upon Tyne?

Food Budget in Newcastle upon Tyne

What did other people spend on Food in Newcastle upon Tyne?

Transportation Budget in Newcastle upon Tyne


Flights to Newcastle upon Tyne

How much does it cost to go to Newcastle upon Tyne? Naturally, it depends on the dates. We recommend SkyScanner because they can find the best deals across all airlines.

Rental Cars in Newcastle upon Tyne

The price of renting a car in Newcastle upon Tyne will depends on dates, the type of car, the location, and your age. We recommend SkyScanner because they can find the best deals across all car rental companies.

What did other people spend on Transportation in Newcastle upon Tyne?

Entertainment Budget in Newcastle upon Tyne

Alcohol Budget in Newcastle upon Tyne

Affordable Hostels in Newcastle upon TyneLondonBirminghamLiverpoolBristolManchester

Newcastle upon Tyne On a Budget

Newcastle upon Tyne
Newcastle upon Tyne is a port city located in northeast England with a population of about 250,000. It's popular with tourists in large part because it has what is considered to be the best nightlife in England. It's a diverse city with a lot of art, music, and sports. It also makes for a good starting point to tour the Northumberland coast and Hadrian's Wall. There's a distinct and rich culture in the area, much of which is centered around the Geordie culture with lots of folk music and traditional dance.

Newcastle's climate is oceanic and milder than most places found at the same latitude. The Gulf Stream creates a warming effect and the North Pennines protect the city from rain, making it one of the driest cities in the UK. Temperatures are similar to those found throughout the British Isles and summer is a pleasant time to visit.

Many people consider northeast England to be one of the most beautiful parts of the country and as such Newcastle upon Tyne has benefited from an influx of tourists. The city itself has many interesting sights. The River Tyne and the Tyne Bridge offer a great place to walk and Gateshead Millennium Bridge is worth visiting as well. Also make sure you visit the Castle Keep, the Central Arcade, Grey's Monument, Grainger Town, and St Nicholas Cathedral.

Newcastle can be divided into four distinct areas. The City Center is the area between Haymarket and Central Station and the Central Motorway and Leazes Park. There is plenty to do in this area. It has both of the city's universities, the main shopping street of Northumberland, The Gate, which has a cinema, casino and plenty of bars and restaurants, and Times Square.

Quayside can be reached on foot from Central Station. It has plenty of bars, pubs, and restaurants. It also offers great views of the Tyne bridges and a mellow atmosphere.

Ouseburn is the old industrial area, but now it has become an entertainment venue. It's located between Byker Bridge and the river Tyne. It has plenty of pubs, music venues, art galleries, and more.

Jesmond has some affordable restaurants and a few hotels. It's a good alternative option if you don't want to stay in the center of town. It is a popular area for students and it has a nice atmosphere.

There are many different activities available in Newcastle, whether you're interested in culture, nightlife, music, or theatre. The Theatre Royal is close to the city center and has about 380 performances a year. It is also the third home to the Royal Shakespeare Company. Other theaters include the Journal Tyne Theatre, the Live Theatre, Northern Stage, and People's Theatre.

If you're interested in music then you have plenty of options. There are often concerts going on at Sage Music Centre, Metro Radio Arena, O2 Academy, Newcastle City Hall and several venues at Northumbria and Newcastle University.

Popular festivals throughout the year include the Evolution Music Festival, MELA, which celebrates the Indian, Pakistani and Bangladeshi cultures, Chinese New Year, a seasonal Continental Christmas Market, and the Northern Pride event.

If you're looking to enjoy the area's nightlife, head over to the Bigg Market, the Quayside, and the Central Station areas. These neighborhoods have the most lively and active bars in town and you're likely to find activities almost any night of the week.

You'll find interesting dining options in Newcastle, whatever your budget, but if you're looking for cheaper options consider heading to Quayside or close to the Central Station. These restaurants are often the best deal. Another affordable option is to grab takeaway food, of which there is plenty in Newcastle. This is perhaps the cheapest option available in town. The area around Bigg Market also has some affordable places to eat that offer happy hour meals that are really cheap. You usually get a three course meal for a good price. These are usually international restaurants such as Italian, Indian, Greek, Vietnamese and Lebanese, among others.

You have several options to travel around the city. Some areas are compact and walkable with some streets remaining pedestrian only. Cycling is a decent option as the city has reasonable facilities to accommodate bikes. The metro is fast and safe as well if you're hoping to travel greater distances at a faster speed. It offers transportation to the city center as well as outlying suburbs and nearby towns such as Whitley Bay, Tynemouth, North and South Shields, Sunderland, as well as Newcastle International Airport. The system has two lines. The Green line runs from the airport to South Hylton and the Yellow Line runs between St. James Park and South Shields with a loop that passes through the coastal towns of North Shields, Whitley Bay and Tynemouth. Trains run every 10 minutes between the hours of 6:00 am and 11:00 pm. Buses also offer a thorough and comprehensive option for exploring the city. 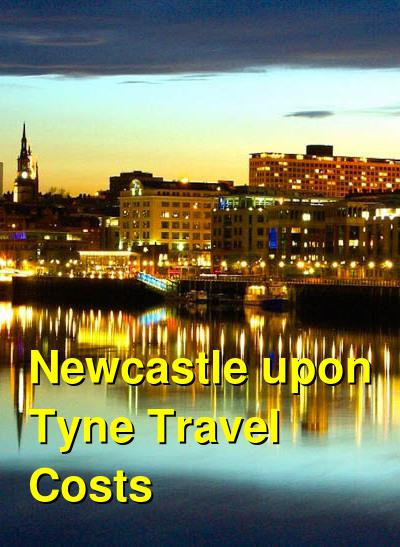