How much does it cost to travel to Cambridge?

How much money will you need for your trip to Cambridge? You should plan to spend around £107 ($149) per day on your vacation in Cambridge, which is the average daily price based on the expenses of other visitors. Past travelers have spent, on average, £33 ($46) on meals for one day and £19 ($26) on local transportation. Also, the average hotel price in Cambridge for a couple is £116 ($161). So, a trip to Cambridge for two people for one week costs on average £1,497 ($2,082). All of these average travel prices have been collected from other travelers to help you plan your own travel budget.

A vacation to Cambridge for one week usually costs around £748 for one person. So, a trip to Cambridge for two people costs around £1,497 for one week. A trip for two weeks for two people costs £2,994 in Cambridge. If you're traveling as a family of three or four people, the price person often goes down because kid's tickets are cheaper and hotel rooms can be shared. If you travel slower over a longer period of time then your daily budget will also go down. Two people traveling together for one month in Cambridge can often have a lower daily budget per person than one person traveling alone for one week.


How expensive is Cambridge? How much money do I need for Cambridge?

How much does a trip to Cambridge cost? Is Cambridge expensive? The average Cambridge trip cost is broken down by category here. All of these Cambridge prices are calculated from the budgets of real travelers.

How much do vacation rentals cost in Cambridge? Prices vary by location, date, size of the place, and the level of luxury. See below for options.

How much does it cost to go to Cambridge? Naturally, it depends on the dates. We recommend Kayak because they can find the best deals across all airlines.

The price of renting a car in Cambridge will depends on dates, the type of car, the location, and your age. We recommend Kayak because they can find the best deals across all car rental companies.

Cambridge On a Budget 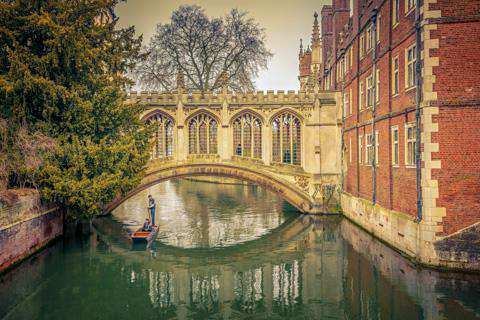 Cambridge, England
Cambridge is a university city in England located along the River Cam and best-known as the home of Cambridge University, which was established in the 13th century. Aside from university architectural landmarks, Cambridge is also characterized by open green landscapes perfect for picnics and gentle walks, as well as churches, museums, parks, and gardens.

Many visitors come to Cambridge to see the university and its many colleges. Some charge entrance fees, and they are all generally closed to the public during exam periods. King’s College and King’s College Chapel are popular landmarks for sightseeing, as is Queens' College with its Mathematical Bridge across the River Cam and medieval Old Hall. Trinity College is also very famous, featuring a beautiful courtyard and a library that houses important artifacts including medieval bibles, possessions of Sir Isaac Newton, and original manuscripts by Wittgenstein. Other colleges good for sightseeing include St Johns College, Pembroke College, Clare College, Saint Catharine’s College, and Homerton College-all of which have scenic grounds and impressive architecture.

As far as green areas go, one of the most popular is The Backs-a large green space along the River Cam that runs behind several colleges, offering walking paths, trees, and opportunities for boating. The Botanic Garden of Cambridge University is also a relaxing place to spend some time enjoying the collection of more than 10,000 species of plants. Other areas with parks and recreation include Jesus Green, Parker's Piece, and Christ's Piece.

Churches are another central aspect to the Cambridge landscape. Loyal to the Church of England, the colleges of Cambridge all have chapels. One of the largest and most impressive is Great St Mary's, which is open to the public. Dating from the 15th-century, the church is open daily and allows visitors to catch stunning views of the city from its bell-tower.

For the most part, Cambridge is pedestrian-friendly. Many sights can be easily reached on foot and much of the central area is traffic-free, except for cyclists. The tourist hub for shops and dining is located in around Market Square, though there are also plenty of options outside this area as well. Most of the main attractions are within walking distance from this central area, though cycling is also popular. University Colleges are scattered throughout the city, along with churches, chapels, and plenty of green space.

In addition to sightseeing, there are also a number of museums worth-visiting in Cambridge. The most important is probably the Fitzwilliam Museum on Trumpington Street, which showcases a large collection of art and antiquities from many ages and civilizations. Their departments include Antiquities, Applied Arts, Coins and Medals, Manuscripts and Printed Books, and Paintings, Drawings and Prints. Other museums include The Sedgwick Museum of Earth Sciences, the Museum of Archaeology and Anthropology, the Folk Museum, the Polar Museum, and the University Library.

Other activities involve enjoying the green spaces, gardens, parks, and opportunities for recreation along the River Cam. Punting, for example, involves propelling yourself in a long wooden boat by pushing a pole against the shallow river bottom. Guided river tours are available for those looking to experience the local sport, as are options for self-hire. Rowing on the Cam is also very common, and visitors might be able to see races at certain times of the year.

Cambridge has a rich and varied dining scene like most cities. Traditional fare of England consists of anything you might find in a British pub-fish and chips, bangers and mash (sausages and mashed potatoes), stews, soups, and just about any kind of meat pie you could ask for (often called pasties). A few additional specialties include black pudding (black sausage), steak and kidney pudding, pickled eggs, and plenty of coffee and tea shops. With England's imperial history, curry is also a very popular specialty in many British cities, including Cambridge. English pubs can be found just about everywhere, as well as kebab and pizza shops, but there are also plenty of restaurants serving Asian, Indian, Italian, American, and more.

Cambridge is located about 50 miles (80 kilometers) north of London, making London airports a common way of entry when traveling to Cambridge. London Stansted Airport is about 30 miles away and has regular bus and rail services into Cambridge. Luton Airport is also easily connected to Cambridge via National Express Coach. Both airports offer some of the cheapest international flights in Europe with a number of low-cost airlines. Other London airports include Heathrow, Gatwick, and London City Airport. Regular trains run from London (at King’s Cross and Liverpool Street) to Cambridge.