How much does it cost to travel to Ocean City?

How much money will you need for your trip to Ocean City? You should plan to spend around $128 per day on your vacation in Ocean City, which is the average daily price based on the expenses of other visitors. Past travelers have spent, on average, $39 on meals for one day and $38 on local transportation. Also, the average hotel price in Ocean City for a couple is $133. So, a trip to Ocean City for two people for one week costs on average $1,796. All of these average travel prices have been collected from other travelers to help you plan your own travel budget.

A vacation to Ocean City for one week usually costs around $898 for one person. So, a trip to Ocean City for two people costs around $1,796 for one week. A trip for two weeks for two people costs $3,592 in Ocean City. If you're traveling as a family of three or four people, the price person often goes down because kid's tickets are cheaper and hotel rooms can be shared. If you travel slower over a longer period of time then your daily budget will also go down. Two people traveling together for one month in Ocean City can often have a lower daily budget per person than one person traveling alone for one week.


How expensive is Ocean City? How much money do I need for Ocean City?

How much does a trip to Ocean City cost? Is Ocean City expensive? The average Ocean City trip cost is broken down by category here. All of these Ocean City prices are calculated from the budgets of real travelers.

Looking for a hotel in Ocean City? Prices vary by location, date, season, and the level of luxury. See below for options.

How much does it cost to go to Ocean City? Naturally, it depends on the dates. We recommend Kayak because they can find the best deals across all airlines.

The price of renting a car in Ocean City will depends on dates, the type of car, the location, and your age. We recommend Kayak because they can find the best deals across all car rental companies.

Ocean City On a Budget 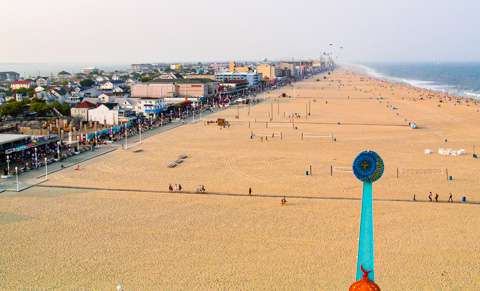 Ocean City, Maryland
One of the most popular vacation areas of the U.S. east coast, Ocean City is a long-time resort town, taking roots as a getaway when the first beach-front cottage was built in 1869. The destination sits on a strip of land between the Atlantic Ocean and the Isle of Wight Bay. The Atlantic Hotel was the first major hotel, built in 1875 and still in business today. It has been family owned and operated since Charles W. Purnell bought it in 1923.

Though the area suffered a hurricane in the 1930s and the original pier was destroyed by fire in 1994, the setbacks did little to hinder the city's growth. Today Ocean City flourishes as a resort town thriving with hotels, motels, apartment houses, shopping centers, residential communities, and condominiums. The southern tip houses the Ocean City Boardwalk, which serves as the main shopping district and entertainment area of the town with amusement parks and carnival goodies. Ocean city is a favorite vacation getaway and really comes to life in the summer months, attracting up to 8 million visitors annually.

Primarily a vacation destination, Ocean City's best sights are the beach and boardwalk. The beaches are beautifully kept and stretch for about 10 miles. They are free and open to the public (the way beaches should be!) from 6am-10pm daily. A family friendly environment, the beaches occasionally host free activities like concerts and movies. After a long day of swimming, sunning, and building sand castles, the best way to spend the evening is exploring the boardwalk. With an endless variety of stores, sweet shops, arcades, and amusements, Ocean City's boardwalk has been ranked amongst the best in America by the Travel Channel itself. It has also has been consistently rated as one of the "best boardwalks for food" in USA Today, and was rated one of the Top Ten Boardwalks to Visit in the US by National Geographic. Stretching for about 2.5 miles, the boardwalk ends with two amusement parks that are very popular with visitors, Jolly Roger at the Pier and Trimpet's Rides.

Ocean City is first and foremost a resort town. Coastal Highway 528 stretches as the main route through the city, with many side streets on either side, residential to the east and resort to the west along the Atlantic beaches. The boardwalk stretches from the southernmost part of the city up to 27th street, and is the commercial and entertainment district of the area with many amusements, shopping, sweet snacks, and carnival food. The rest of the oceanfront which stretches to the north is lined with hotels and condominiums for easy access to the town's beaches. Also located along the main highway are restaurants, movie theaters, hotels, shopping centers, bars, and mini golf.

While the beach, boardwalk, and amusement parks are the main attractions of Ocean City, there is so much more for those looking to go the extra mile.

In regards to outdoor activities, many take advantage of the waterfront location with water sports like surfing, fishing, kayaking, and canoeing. There are even establishments catering to those who wish to have a more thrilling experience with activities like parasailing or jet skiing. In regards to fishing, Ocean City has a long history, both commercial and recreational. The town bills itself as the "White Marlin Capital of the World," even hosting an annual tournament called the White Marlin Open. Held in early August, prize money for the largest White Marlin, Blue Marlin, and Tuna can reach up to 1 million dollars.

For the history buffs, Ocean City is home to many historical landmarks, like the Atlantic Hotel mentioned earlier. Though it was rebuilt in 1926 due to fire, the place exists as one of the oldest and most historic hotels in the city. There is also a 2.5 ton anchor on display at the boardwalk, recovered from the Sailboat Wreck in 1870 by the commercial clam vessel Star Light. The Ocean City Life-Saving Station Museum is another historical site. Built in 1891 as a part of the coastal system, it was important for the saving of vessels and lives in distress. Today the museum houses interesting exhibits on the history of ocean life, nature, and life-saving services.

For food, the boardwalk of Ocean City is a hot spot. From salt water taffy, cotton candy, fudge, and ice cream to pizza, burgers, barbeque, and sandwiches, the options available at the boardwalk have been consistently rated at the top. There are even a few restaurants that serve anything from spicy steamed crabs to thick sizzling steaks. Being a coastal city of Maryland, visitors and locals indulge in the seafood caught fresh offshore. A long-time favorite is of course the world-renowned Chesapeake Bay crab cakes, seasoned with Old Bay. Some of the top restaurants as rated on TripAdvisor include Thrasher's French Fries, Fisher's Popcorn, The Shark on the Harbor, and Liquid Assetts. Hooked, Sunset Grill, and Crabcake Factory are a few other favorites.

Keep in mind that on summer weekends, traffic can get heavy, especially on the main highways from Washington, D.C. and Baltimore.

In regards to public transportation, Ocean City has a system called the Beach Bus which runs pretty much the entire length of the city, 24 hours a day, 7 days a week, year round.

The city also maintains open-air shuttles on the boardwalk called the Tram, which runs parallel to the boardwalk from Memorial Day to Labor Day Weekend.