How much does it cost to travel to Memphis?

How much money will you need for your trip to Memphis? You should plan to spend around $129 per day on your vacation in Memphis, which is the average daily price based on the expenses of other visitors. Past travelers have spent, on average, $39 on meals for one day and $27 on local transportation. Also, the average hotel price in Memphis for a couple is $134. So, a trip to Memphis for two people for one week costs on average $1,801. All of these average travel prices have been collected from other travelers to help you plan your own travel budget.

A vacation to Memphis for one week usually costs around $900 for one person. So, a trip to Memphis for two people costs around $1,801 for one week. A trip for two weeks for two people costs $3,601 in Memphis. If you're traveling as a family of three or four people, the price person often goes down because kid's tickets are cheaper and hotel rooms can be shared. If you travel slower over a longer period of time then your daily budget will also go down. Two people traveling together for one month in Memphis can often have a lower daily budget per person than one person traveling alone for one week.


How expensive is Memphis? How much money do I need for Memphis?

How much does a trip to Memphis cost? Is Memphis expensive? The average Memphis trip cost is broken down by category here. All of these Memphis prices are calculated from the budgets of real travelers.

How much do vacation rentals cost in Memphis? Prices vary by location, date, size of the place, and the level of luxury. See below for options.

How much does it cost to go to Memphis? Naturally, it depends on the dates. We recommend Kayak because they can find the best deals across all airlines.

The price of renting a car in Memphis will depends on dates, the type of car, the location, and your age. We recommend Kayak because they can find the best deals across all car rental companies.

What did other people spend on Food in Memphis?

Typical prices for Food in Memphis are listed below. These actual costs are from real travelers and can give you an idea of the prices in Memphis, but your costs will vary based on your travel style.

Memphis On a Budget 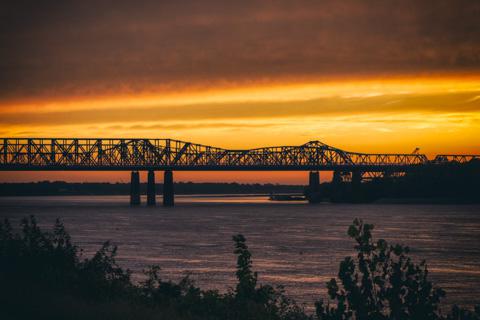 Memphis, Tennesse
Located on the banks of the Mississippi River in southwest Tennessee, Memphis is a city famous for the blues, soul, and Rock 'n' Roll music that originated there. There are a number of museums and historic landmarks like Elvis Presley's Graceland dedicated to that history, while areas of the city like Beale Street keep the musical culture alive today with a vibrant scene of bars, restaurants, and live music.

Most visitors staying in Memphis come to experience its musical culture, both past and present. With figures like Elvis Presley, B.B. King, Jerry Lee Lewis, and Johnny Cash all having recorded albums at the Sun Studio, it is no wonder it's considered to be the birthplace of rock' n' roll. Presley's Graceland mansion is an especially popular attraction, open for tours of the musician's estate, which includes costumes, gold records, a car museum, private jets, and more, as well as Presley's final resting place.Â  It is also the best place to purchase Elvis Presley souvenirs. Other music landmarks include the Rock 'n' Soul Museum, Blues Hall of Fame, and Stax Museum of American Soul Music, all of which feature unique insight into the culture and history of Memphis's musical legacy.

Other non-musical attractions worth visiting include the National Civil Rights Museum, the Belz Museum of Asian & Judaic Art, and the Ornamental Metal Museum.Â  Even the Mississippi River draws tourists to the outskirts of Memphis.Â  Mud Island River Park, for example, contains a museum of the Mississippi River and a scale model of the river that visitors can wade through. There is even a large pool at the end of the river model representing the Gulf of Mexico that visitors can paddleboat in. Additional closer to nature attractions include the Memphis Zoo, Memphis Botanic Gardens, Dixon Gallery and Gardens, and Shelby Farms city park which features 4,500 acres with biking and horse trails, bodies of water for fishing and boating, and a few playgrounds.

Downtown Memphis is a hub for visitors as well as much of the city's local population. Beale Street is the downtown's entertainment district. Known as the "Home of the Blues" it is a melting pot of delta blues, jazz, rock ‘n’ roll, R&B, and gospel, and covers three blocks of bars, nightclubs, restaurants, and shops.Â  South Main, just south of Beale Street, is a charming historic neighborhood of the downtown area. Home to the arts district, South Main features trendy shops, restaurants, art galleries, and some of the city's oldest buildings. Midtown is another thriving center, featuring its own Broad Avenue Arts District, historic Cooper-Young neighborhood, Overton Square, and Overton Park which encompasses the Memphis Zoo, Memphis College of Art (MCA), the Brooks Art Museum, the Overton Park Golf Course, and the largest strand of old growth forest in a U.S. city.

The music and food culture of Memphis dominates the tourism scene of the city. Many come to sightsee important historic landmarks, visit museums, and experience the local culture of Memphis today. May is an especially popular time to visit, largely known as the Memphis in May International Festival, though it consists of multiple festivals and events.Â  Some of these include the Beale Street Music Festival which showcases over 40 musicians on multiple stages for three days the first weekend in May, and the World Championship Barbecue Cooking Contest where hundreds of teams compete for over $100,000 in prizes. Visitors can sample championship barbeque and the festivities end with a fireworks display.

Memphis is famous for its food as well as its music. Memphis-style barbecue has become well-known due to the World Championship Barbecue Cooking Contest held each May, which has been listed in Guinness World Records as the largest pork barbecue contest in the world. The meat is cooked in two varieties: “wet” (with spicy, tangy sauce) or “dry” (rubbed with spices before cooking). Other examples of Southern home cooking that abound in Memphis include fried chicken, catfish, country ham, buttermilk biscuits and gravy, cornbread, fried pickles, and banana pudding.Â  Often classified as Soul food, these dishes and other favorites like po'boy, hush puppies, and mac and cheese are widespread. As a major city, Memphis also has a plethora of restaurants serving international fare as well, from Japanese, Chinese, Indian, and Filipino to Italian, Venezuelan, Cuban, and even West African.

Memphis International Airport is the nearest major airport near the city, located about 7 miles southeast of downtown Memphis. It is home to the FedEx global hub, but also services passengers with airlines including Air Canada, American Airlines, Allegiant Air, Frontier Airlines, Southwest Airlines, Delta, and United Airlines. As an alternative, Nashville International Airport is the largest airport in Tennessee, and is located about 220 miles northeast of Memphis.

By train, Amtrak has stops up and down the Mississippi River. Long-distance bus services are available through Greyhound.

By Bryan in Entertainment
If you're in town looking for music and nightlife, visit Beale Street. It's the "home of the blues" with bars and restaurants full of live music. The road closes to vehicles at night leaving a pedestrian only area where the bars sell alcohol on the streets and people are out chillin' with their drinks everywhere.