How much does it cost to travel to Providence?

How much money will you need for your trip to Providence? You should plan to spend around $168 per day on your vacation in Providence, which is the average daily price based on the expenses of other visitors. Past travelers have spent, on average, $38 on meals for one day and $37 on local transportation. Also, the average hotel price in Providence for a couple is $182. So, a trip to Providence for two people for one week costs on average $2,351. All of these average travel prices have been collected from other travelers to help you plan your own travel budget.

A vacation to Providence for one week usually costs around $1,175 for one person. So, a trip to Providence for two people costs around $2,351 for one week. A trip for two weeks for two people costs $4,702 in Providence. If you're traveling as a family of three or four people, the price person often goes down because kid's tickets are cheaper and hotel rooms can be shared. If you travel slower over a longer period of time then your daily budget will also go down. Two people traveling together for one month in Providence can often have a lower daily budget per person than one person traveling alone for one week.


How expensive is Providence? How much money do I need for Providence?

How much does a trip to Providence cost? Is Providence expensive? The average Providence trip cost is broken down by category here. All of these Providence prices are calculated from the budgets of real travelers.

How much do AirBnB's cost in Providence? Prices vary by location, size of the place, and the level of luxury. See below for options.

How much does it cost to go to Providence? Naturally, it depends on the dates. We recommend SkyScanner because they can find the best deals across all airlines.

The price of renting a car in Providence will depends on dates, the type of car, the location, and your age. We recommend SkyScanner because they can find the best deals across all car rental companies.

Providence On a Budget 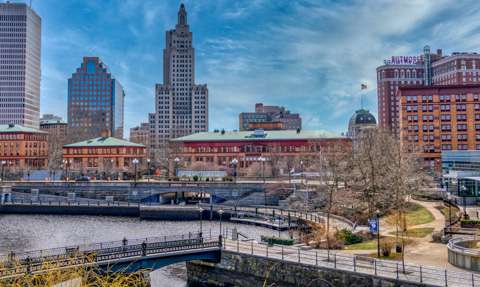 Providence, RI
Providence is the state capital and the largest city in Rhode Island. It's a fascinating city to visit with diverse neighborhoods, beautiful parks, and a rich history. Like much of New England, the winters are cold and snowy with milder summers. It's a great year round destination that has a beautiful setting whether it's covered in snow or in full bloom.

For tourists, there are four neighborhoods that are most interesting in Providence.

Downcity is where you'll find the downtown core as well as Waterplace Park, the Providence Place Mall, and Capitol Hill.

Federal Hill is to the west of the downtown area and runs along Atwells Avenue. This area is popular for its lively nightlife scene and Italian restaurants.

College Hill/The East Side is where you'll find Brown University. It has many of the city's most historical and beautiful homes as well as diverse shops and restaurants. The neighborhood runs along Thayer Street where it meets Angell Street.

South Providence begins at Elmwood Avenue and Broad Street. This area has diverse, international restaurants that include Spanish and Chinese options. The area is about a 15 minute drive from downtown.

Providence has a wide variety of activities that visitors can enjoy including live shows, live concerts, seasonal festivals and more. Some of the more popular venues include the Providence Performing Arts Center, Avon Cinema, Dunkin' Donuts Center, the Rhode Island Convention Center, the Century Lounge, and Monet Lounge. During the summer months it's well worth exploring Water Place Park which has pedestrian walkways and live music.

Downtown Providence is compact and walkable. Parking isn't particularly challenging to find, particularly if you're willing to pay for it. The public transportation system is based on buses that are generally reliable, but many visitors prefer to drive. Historic Providence also has two downtown lines that are part of the Providence LINK Trolley system. They cost $2 a ride and are a convenient way to get around.