How much does it cost to travel to Portland, Maine?

How much do vacation rentals cost in Portland, Maine? Prices vary by location, date, size of the place, and the level of luxury. See below for options.

What did other people spend on Food in Portland, Maine?

Typical prices for Food in Portland, Maine are listed below. These actual costs are from real travelers and can give you an idea of the prices in Portland, Maine, but your costs will vary based on your travel style.

How much does it cost to go to Portland, Maine? Naturally, it depends on the dates. We recommend Kayak because they can find the best deals across all airlines.

The price of renting a car in Portland, Maine will depends on dates, the type of car, the location, and your age. We recommend Kayak because they can find the best deals across all car rental companies.

Portland, Maine On a Budget 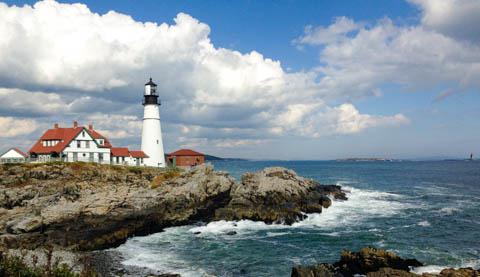 Portland, Maine
The largest city in the U.S. state of Maine, Portland has much to offer with its most visited areas being the historic Old Port and the Arts District. They are a mix of the old and new, with a historic feel of the waterfront port versus the contemporary culture of the local art scene. In addition to these popular locations, the Portland area is marked with historical landmarks and museums, places to shop, award-winning restaurants, and activities in areas just outside the city as well.

The Old Port is a historic district of Portland, Maine, known for its cobblestone streets, 19th century brick buildings, and fishing piers. While the coastal town has its history, the area is also a center of activity good for shopping and entertainment with a selection of boutiques, galleries, restaurants, and bars. If you take a walk at the water's edge along Commercial Street you can see a great view of the working waterfront. The smell of the sea air, the sound of the foghorn on a distant lobster boat, and the chatter of seagulls flying above all add to the quaint charm of the coastal atmosphere of the Old Port. A few other features to note are Portland's City Hall built by Carrere and Hastings (best known for their design of the New York Public Library), as well as Portland High School, the oldest standing high school in the United States.

Located just a few blocks from the waterfront, Portland's Arts District has been re-imagined from the original department store shopping area to be home to some of Portland's renowned museums and galleries like the Portland Museum of Art and the Children's Museum and Theatre of Maine. The Arts District also houses the Maine College of Art (MECA) as well as attractions like the Salt Institute of Documentary Studies, Cross Insurance Arena, the renovated State Theatre, Portland Stage Company, the Maine Historical Society, Museum of African Culture, and the historic Merrill Auditorium for performing arts. The funky vibes of this downtown area emanate from the collection of museums and art galleries mingled with numerous contemporary music and performance venues, plus some fine and ethnic dining choices. A walk through this part of the city will immerse you in some of the contemporary culture of Portland, a full display of the arts native to the area.

The city of Portland is full of opportunities for shopping, dining, and sightseeing. Once you have had your fill of the Old Port and Arts District, Victoria Mansion is another neat place to see during your visit. The mansion was built between 1858 and 1860 as a summer home for Ruggles Sylvester Morse, a Maine native who made his fortune in New Orleans as the proprietor of luxury hotels. In 1894 the estate and most of its contents was sold to J.R. Libby, a merchant who opened Portland's first department store, and was later saved from demolition in 1940 by William Homes, a retired educator. Holmes opened the mansion as a museum in honor of Queen Victoria, and Victoria Mansion was designated a National Historic Landmark in 1971. With well-preserved, quality interiors the mansion exists as an unparalleled example of pre-Civil War grandeur. It remains a rich piece of Maine's history, and a national gem as well.

If you prefer to get away from the busyness of the city you might enjoy a walk along Portland's Eastern Promenade. The 68.2-acre park offers great views of the harbor's activities overlooking Casco Bay and a variety trails for walking, running, or biking. Sunrise overlooking the Casco Bay Islands is a notable sight, but if you are not an early riser, the views during the day are just as spectacular. If that's not enough, you can even take a day trip via ferry to the Casco Bay Islands, which are sometimes called The Calendar Islands as there are so many you could explore a different island almost every day of the year. The islands offer visitors a chance to enjoy a slower pace of life-exploring nature, watching for wildlife, relaxing on beaches, and admiring works of local artists.

When it comes to food in Portland, nothing is more renowned than the Maine Lobster. Some of the finer dining options in the city include places like Fore Street, the Back Bay Grill, and Grace which is uniquely housed in the sanctuary of a former church on the National Register of Historic Places in Portland. At any of these places you can splurge and enjoy some of the finer seafood and wines of the city. If you prefer something more casual, there are plenty of pubs and cafes throughout Portland where you can grab a beer and lobster roll. If you are a beer enthusiast you might even want to visit the Allagash Brewery, a local of Portland, Maine. A tour of the brewery takes visitors from the beginning stages of the craft all the way to the bottling room, with samples at the very end of the tour.

The nightlife of the city is also very vibrant with all kinds of cocktail and sports bars thriving with people. Vena's Fizz House is one such cocktail bar that is especially unique. The array of ingredients and knowledgeable staff makes the place more of an apothecary, allowing you to sample complex concoctions and take those fine ingredients home to experiment on your own.

The nearest airport is the Portland International Jetport, where car rental services are available.

Concord Coach Lines bus service connects Portland to 14 other communities in Maine as well as to Boston's South Station and Logan Airport. Amtrak also provides train service to eight towns and cities to the south, ending at Boston's North Station. To the north, the train goes to Freeport and Brunswick. Both the bus and train services can be found at the Portland Transportation Center on Thompsons Point Road. There are also Greyhound Lines on Saint John Street.

The Portland Explorer and the METRO are two public bus systems in Portland. Taxis are also available.