How much does it cost to travel to Vigo?

How much money will you need for your trip to Vigo? You should plan to spend around €80 ($87) per day on your vacation in Vigo, which is the average daily price based on the expenses of other visitors. Past travelers have spent, on average, €28 ($30) on meals for one day and €30 ($32) on local transportation. Also, the average hotel price in Vigo for a couple is €69 ($75). So, a trip to Vigo for two people for one week costs on average €1,114 ($1,211). All of these average travel prices have been collected from other travelers to help you plan your own travel budget.

A vacation to Vigo for one week usually costs around €557 for one person. So, a trip to Vigo for two people costs around €1,114 for one week. A trip for two weeks for two people costs €2,228 in Vigo. If you're traveling as a family of three or four people, the price person often goes down because kid's tickets are cheaper and hotel rooms can be shared. If you travel slower over a longer period of time then your daily budget will also go down. Two people traveling together for one month in Vigo can often have a lower daily budget per person than one person traveling alone for one week.


How expensive is Vigo? How much money do I need for Vigo?

How much does a trip to Vigo cost? Is Vigo expensive? The average Vigo trip cost is broken down by category here. All of these Vigo prices are calculated from the budgets of real travelers.

Looking for a hotel in Vigo? Prices vary by location, date, season, and the level of luxury. See below for options.

How much does it cost to go to Vigo? Naturally, it depends on the dates. We recommend Kayak because they can find the best deals across all airlines.

The price of renting a car in Vigo will depends on dates, the type of car, the location, and your age. We recommend Kayak because they can find the best deals across all car rental companies.

Vigo On a Budget 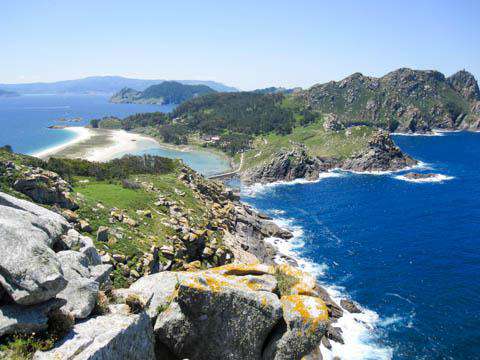 Cies Islands, Vigo, Spain
Originally a small fishing town, Vigo has grown to become the most populated municipality in the region of Galicia in northwestern Spain. Remnants of the old world still exist in its historic center architecture and plazas, while the commodities of a modern city have blended into its boundaries. The old center remains the hub of activity with plenty to see and do, shopping and dining included.

The historic center, Casco Vello, is probably the most scenic when it comes to old world architecture. It marks the original boundaries of the town as a fishing village centered on the Collegiate Church of Santa Maria. This is the oldest church in the city, though there are a number of other architectural examples throughout Vigo. The area surrounding the church is divided into four charming plazas amidst original architecture from the city's beginnings (more on this below). The old city center is also a hub for markets selling fresh fish and produce, while Rua do Principe is primarily a street for shopping.

Then there is the old town hall which now houses the Casa Galega da Cultura (Galician House of Culture). The center offers artistic and literary activities in relation to a museum collection based on the study of Galicia's current and historical reality.

Castro Park offers a little escape from the busyness of the city. It features a large stone cross as well as ruins of a pre-Roman settlement and an old fort once called San Sebastian. Built into a hill, there are some great views of and bay from the top. Another significant park on a hill is La Guia. Located just outside of the city, its hilltop chapel can be seen from anywhere in Vigo, making it an important landmark with excellent views.

The oldest quarter of the city is located down by the marina. This was the original town long before Vigo grew into a populated city. Remnants of the town still exist in many original buildings radiating out from the Collegiate church of Saint Maria at its center. The area is also home to the town's four original plazas which include plaza de Pedra, plaza Almeida, Plaza Princesa, and the plaza Constitucion which is the largest of the four. Though it is the oldest district of the city, it is always bustling with cafes and restaurants amongst the stone Galician buildings designed with arched walkways and balconies. It is a place dominated by old world charm. The areas skirting old town also have an impressive collection of turn of the century architecture with structures like the grand "Fraga Caixa Galicia Theatre" and the late 19th century "el Moderno" buildings. The rest of the city has a number of parks, gardens, and squares in addition to buildings and residential sections.

Beyond architectural sights, parks, and plazas, there are a few museums worth visiting within the city. Some of these include the Museo Do Mar De Galicia (or Sea Museum Galicia) and the local Museo Municipal de Vigo which has a collection of more than 1500 works of art, including paintings, sculptures, drawings, and applied arts.

Another activity is to visit the Illas Cies, a national park situated just off the coast. Boats to the islands run several times a day during the summer season. Once there, visitors will find opportunities for bird and wildlife watching and a number of nice beaches for swimming, snorkeling, and diving.

The dining scene of Vigo is synonymous with that of Galicia region as a whole-with seafood being a dominating item on the menu. The Spanish word for seafood is "marisco," and fresh catches include things like clams, mussels, pod razors, cockles, crabs, barnacles, crayfish, snails, lobster, squid, sea bass, hake, scorpion fish, anchovies, sardines, and tuna. Pulpo a feira is a common seafood dish of octopus prepared with oil, salt, and hot paprika. Then there are empanadas-pies made with a traditional dough, filled with onion, pepper, and some meat, usually tuna, veal, or seafood. Another specialty of Galicia is a type of stew called Caldo Galego, which is simple but satisfying for warding off the damp chill of the region's climate. It is a common winter dish as is LacÃ³n con grelos which consists of pork cooked with turnip, potatoes, and chorizo. Most dining options are concentrated in the old quarter of town near the waterfront and marina.

By rail, there is direct train to/from Porto, Portugal twice daily as well as to several other Spanish cities including Santiago de Compostela (hourly), Madrid (twice per day), Bilbao (once per day), and Pontevedra (several times per day).

There are also local ferries that sail from neighboring villages like Cangas and Moana.