Travel Budget for A Coruna

How much does it cost to travel to A Coruna?

How much money will you need for your trip to A Coruna? You should plan to spend around €71 ($75) per day on your vacation in A Coruna, which is the average daily price based on the expenses of other visitors. Past travelers have spent, on average, €23 ($24) on meals for one day and €10 ($11) on local transportation. Also, the average hotel price in A Coruna for a couple is €82 ($87). So, a trip to A Coruna for two people for one week costs on average €992 ($1,048). All of these average travel prices have been collected from other travelers to help you plan your own travel budget.

A vacation to A Coruna for one week usually costs around €496 for one person. So, a trip to A Coruna for two people costs around €992 for one week. A trip for two weeks for two people costs €1,984 in A Coruna. If you're traveling as a family of three or four people, the price person often goes down because kid's tickets are cheaper and hotel rooms can be shared. If you travel slower over a longer period of time then your daily budget will also go down. Two people traveling together for one month in A Coruna can often have a lower daily budget per person than one person traveling alone for one week.


How expensive is A Coruna? How much money do I need for A Coruna?

How much does a trip to A Coruna cost? Is A Coruna expensive? The average A Coruna trip cost is broken down by category here. All of these A Coruna prices are calculated from the budgets of real travelers.

Accommodation Budget in A Coruna

Vacation Rental Prices in A Coruna

How much do vacation rentals cost in A Coruna? Prices vary by location, date, size of the place, and the level of luxury. See below for options.

Transportation Budget in A Coruna


Flights to A Coruna

How much does it cost to go to A Coruna? Naturally, it depends on the dates. We recommend Kayak because they can find the best deals across all airlines.

Rental Cars in A Coruna

The price of renting a car in A Coruna will depends on dates, the type of car, the location, and your age. We recommend Kayak because they can find the best deals across all car rental companies.


Food Budget in A Coruna

Entertainment Budget in A Coruna

What did other people spend on Entertainment in A Coruna?

Typical prices for Entertainment in A Coruna are listed below. These actual costs are from real travelers and can give you an idea of the prices in A Coruna, but your costs will vary based on your travel style.

Alcohol Budget in A Coruna

A Coruna On a Budget 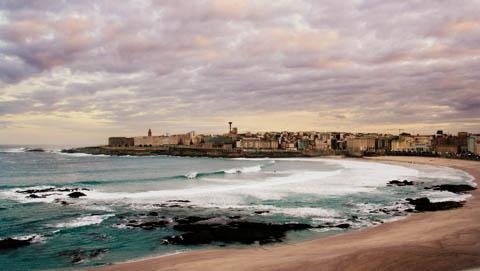 A Coruna, Spain
A Coruna is a busy port city located on a promontory of Spain's Galicia region. It is the capital city of a province of the same name, exhibiting a mix of the old and new from an ancient Roman lighthouse to modern apartments known for their glass balconies. Some of the highlights include the variety of architecture both age-old and modern, the old town, several museums, the harbor, and beaches.

Perhaps the most recognized landmark of the city is the Tower of Hercules, a Roman lighthouse which has been in continuous operation likely since the 2nd century AD. Today it is an UNESCO World Heritage Site surrounded by a public park on a peninsula jutting out into the Atlantic Ocean. A Coruna's Old Town also has a number of historic sites including Roman walls, fort remnants, as well as the city's oldest church, the Church of Santiago, which dates to the 12th century. There are a number of other important churches as well as the historic home and museums of Emilia Pardo Bazan, a famous Galician writer. The home of Picasso is also located in the city, with a small plaque placed outside to identify it.

Some of the city's other notable museums include the Castle of San Anton Archaeological Museum, a Military Museum, Fine Arts Museum, UniÃ³n Fenosa Museum of Contemporary Art, a National Museum of Science and Technology, Casa de las Ciencias which has a planetarium, and the Aquarium Finisterrae.

As for the modern part of the city, A Coruna is sometimes called the glass city due the glass balconies, called gallerias, which dominate the modern buildings.

A Coruna as a whole is a mix of the old and new, with plenty to see on both sides. In the old part of town are the remnants of some Roman walls as well as an old fort built in 1843. This antiquity continues into the medieval district with a handful of important churches, a few museums, historic mansions, and beautiful plazas like the one called Constitutional Square. The Maria Pita square serves as the city's main square, evoking a spectacular impression due to the grandiose faÃ§ade of the City Hall. There are plenty of dining options just off of the square, as well as a harbor surrounded by modern buildings. The new parts of A Coruna are fairly clean and many of these buildings are known for their gallerias, or enclosed glass balconies. There is also a promenade that runs the length of the city on its shoreline, as well as a tram system which can be a great way to see the sights. Additionally, there are a number of city beaches like the playa del Orzan and playa de Riazor, plus some quieter beaches away from the crowds like San Amaro.

Beyond sightseeing in the main part of the city, A Coruna is a place for waterfront activity with a number of beaches, a seaside promenade, as well as opportunities for yacht charter and sailing. The two main beaches are called Orzan and Riazor and are situated on the Western side of the peninsula. They are conveniently located; however, if you seek something closer to a resort beach there are many others located within the province but outside of the city. The promenade is called Paseo Maritimo. It starts by La Marina and continues along the shoreline past the Castelo de San AntÃ³n, the Tower of Hercules, and the beaches, amongst others, ending just outside the main part of the city.

With its location surrounded by water, A Coruna embraces the Galician reputation for excellent seafood. The Spanish word for seafood is "marisco," and fresh catches include things like clams, mussels, pod razors, cockles, crabs, barnacles, crayfish, snails, lobster, squid, sea bass, hake, scorpion fish, anchovies, sardines, and tuna. Pulpo a feira is a common seafood dish of octopus prepared with oil, salt, and hot paprika. Then there are empanadas-pies made with a traditional dough, filled with onion, pepper, and some meat, usually tuna, veal, or seafood. Another specialty of Galicia is a type of stew called Caldo Galego, which is simple but satisfying for warding off the damp chill of the region's climate. There are plenty of dining options to be had in the city, mostly your typical Spanish cafeterias as well as a number of hamburger joints and pizzerias.

A Coruna is served by A Coruna Airport, which has national and international connections operated by operated by Iberia, EasyJet, Vueling, and TAP Air Portugal. Taxis and local buses are available to reach the main part of the city.

Alternatively you can fly into the larger Santiago de Compostela Airport in Lavacolla, located about 50 kilometers from A Coruna.

The bus station in A Coruna has both local and international services (operated mainly by ASLA).

Once in the city, visitors can navigate on foot or by tram.

By backpackguru in Entertainment
Jardines de San Carlos are a nice place to wander. They're inside the old town of the city and make for a nice, quiet, retreat. They're also the location of the tomb of General Sir John Moore. You can see the city walls which were originally built in the 14th century. They served as an important means of defense in the city. Now they are a pleasant garden that was established in 1834 by the Governor Mazzaredo.