How much does it cost to travel to Pontevedra?

How much money will you need for your trip to Pontevedra? You should plan to spend around €96 ($101) per day on your vacation in Pontevedra, which is the average daily price based on the expenses of other visitors. Past travelers have spent, on average, €34 ($36) on meals for one day and €18 ($19) on local transportation. Also, the average hotel price in Pontevedra for a couple is €98 ($104). So, a trip to Pontevedra for two people for one week costs on average €1,344 ($1,419). All of these average travel prices have been collected from other travelers to help you plan your own travel budget.

A vacation to Pontevedra for one week usually costs around €672 for one person. So, a trip to Pontevedra for two people costs around €1,344 for one week. A trip for two weeks for two people costs €2,687 in Pontevedra. If you're traveling as a family of three or four people, the price person often goes down because kid's tickets are cheaper and hotel rooms can be shared. If you travel slower over a longer period of time then your daily budget will also go down. Two people traveling together for one month in Pontevedra can often have a lower daily budget per person than one person traveling alone for one week.


How expensive is Pontevedra? How much money do I need for Pontevedra?

How much does a trip to Pontevedra cost? Is Pontevedra expensive? The average Pontevedra trip cost is broken down by category here. All of these Pontevedra prices are calculated from the budgets of real travelers.

How much do vacation rentals cost in Pontevedra? Prices vary by location, date, size of the place, and the level of luxury. See below for options.

How much does it cost to go to Pontevedra? Naturally, it depends on the dates. We recommend Kayak because they can find the best deals across all airlines.

The price of renting a car in Pontevedra will depends on dates, the type of car, the location, and your age. We recommend Kayak because they can find the best deals across all car rental companies.

What did other people spend on Food in Pontevedra?

Typical prices for Food in Pontevedra are listed below. These actual costs are from real travelers and can give you an idea of the prices in Pontevedra, but your costs will vary based on your travel style.

Pontevedra On a Budget 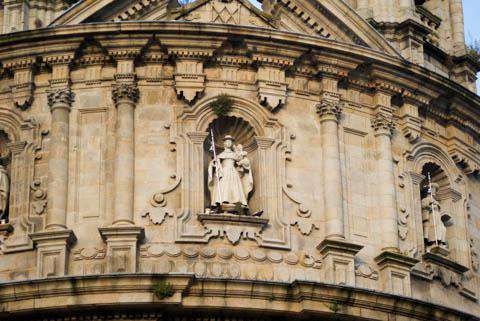 Pontevedra, Spain
An important port city with a medieval past, Pontevedra sits on the northwestern coast of Spain where the Lerez River opens out into the ocean. It is a part of the Galicia region and is known for its seafood, charming plazas, and old world architecture that include a number of chapels, churches, and cathedrals.

Plazas and architecture dominate the main sights of this Galician city. One of Pontevedra's most distinct attractions is probably the Chapel of the Pilgrims situated in one of the plazas of Fererria Square. The chapel is unique not only for its rounded faÃ§ade but for its mix of Baroque detailing with some neo classical design elements. Another notable church is the striking Basilica de Santa Maria a Maior which has a long relationship with the city's seafaring history, while the Gothic Santo Domingo church exists in beautiful ruins. The list of churches and their history goes on.

In regards to plazas, Ferraria Square is the hub of Pontevedra, made up of many smaller plazas including Praza de Peregrino, Praza da Estela, Praza de Curros Enriquez, Praza do Teucro, and Praza da Lena. Each is enveloped in an atmosphere unique to Pontevedra, with the bustling activities of contemporary visitors amongst squares and buildings from another time.

The Praza da Ferreria is a large and bustling square located at the heart of Pontevedra's old quarter. It is, in reality, a collection of smaller plazas embodying an atmosphere full of activity and visitors from all over. Surrounded by market stalls, shopping, cafes, and some of the quarter's historic sights, the Ferreria Square serves as a central hub, the happening place to be. Also existing in the old part of the city is the Pazo do Concello or town hall, many historic churches, old world architecture, and other famous plazas. Another main square is Pontevedra's Alameda, located at the southern edge of the city's sightseeing attractions. It is a main venue for festivals and has a busy tourist booth with English language booklets available.

In addition to exploring the architectural sights and plazas, visitors often visit the Pontevedra Museum which is housed in a complex of baroque and gothic buildings. With a collection of Spanish & Galician art and artifacts from the Middle Ages to the 20th century, it is considered to be one of the finest historical and archeological museums in Spain. It also includes the ruins of Santo Domingo Church and the Edificio Sarmiento, an old convent.

Another neat place to see is the Illa de Esculturas, or Island of Sculptures, which exists as an open air sculpture garden featuring the works of Francisco Leiro, Giovanni Anselmo, Fernando CasÃ¡s, Dan Gram, and Ian Hamilton, amongst others. Each piece is integrated into the landscape of flora and fauna native to the area.

Other activities include Pontevedra's festivals which occur over the course of the year. Most are religious celebrations, while others have evolved over the years to have myths and legends associated with the festivities.

Cuisine of Pontevedra is typical of that of the Galicia region as a whole-with seafood being particularly popular. The Spanish word for seafood is "marisco," and fresh catches include things like clams, mussels, pod razors, cockles, crabs, barnacles, crayfish, snails, lobster, squid, sea bass, hake, scorpion fish, anchovies, sardines, and tuna. Pulpo a feira is a common seafood dish of octopus prepared with oil, salt, and hot paprika. Then there are empanadas-pies made with a traditional dough, filled with onion, pepper, and some meat, usually tuna, veal, or seafood. Another specialty of Galicia is a type of stew called Caldo Galego, which is simple but satisfying for warding off the damp chill of the region's climate. It is a common winter dish as is LacÃ³n con grelos, which consists of pork cooked with turnip, potatoes, and chorizo. Dining options are concentrated in the central part of the city, around and just north of the Praza de Ferreria.

By plane, the nearest airports to Pontevedra are Peinador Airport in Vigo and Santiago de Compostela Airport in Lavacolla. Both are only about 30-40 minutes away via the Atlantico highway (AP-9). Flights from these airports connect to Madrid, as well as other cities in Spain and Europe (including London, Paris, Geneva, and Frankfurt).

By rail, RENFE trains run daily back and forth from Madrid and Barcelona. The train station is located on Rua da Estacion. The bus station is also located here, providing services to many destinations in Spain, Portugal, and beyond.