How much does it cost to travel to Santander?

How much money will you need for your trip to Santander? You should plan to spend around €86 ($91) per day on your vacation in Santander, which is the average daily price based on the expenses of other visitors. Past travelers have spent, on average, €33 ($34) on meals for one day and €19 ($20) on local transportation. Also, the average hotel price in Santander for a couple is €82 ($86). So, a trip to Santander for two people for one week costs on average €1,210 ($1,278). All of these average travel prices have been collected from other travelers to help you plan your own travel budget.

A vacation to Santander for one week usually costs around €605 for one person. So, a trip to Santander for two people costs around €1,210 for one week. A trip for two weeks for two people costs €2,421 in Santander. If you're traveling as a family of three or four people, the price person often goes down because kid's tickets are cheaper and hotel rooms can be shared. If you travel slower over a longer period of time then your daily budget will also go down. Two people traveling together for one month in Santander can often have a lower daily budget per person than one person traveling alone for one week.


How expensive is Santander? How much money do I need for Santander?

How much does a trip to Santander cost? Is Santander expensive? The average Santander trip cost is broken down by category here. All of these Santander prices are calculated from the budgets of real travelers.

How much do vacation rentals cost in Santander? Prices vary by location, date, size of the place, and the level of luxury. See below for options.

How much does it cost to go to Santander? Naturally, it depends on the dates. We recommend Kayak because they can find the best deals across all airlines.

The price of renting a car in Santander will depends on dates, the type of car, the location, and your age. We recommend Kayak because they can find the best deals across all car rental companies.

Santander On a Budget 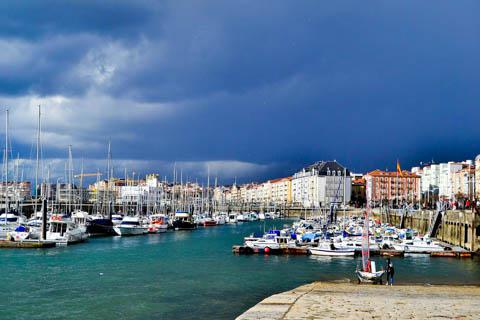 Santander, Spain
Santander is the capital of the Cantabria Region which runs along the northern coast of Spain. Located right on the bay, it is a place of many historic churches and a handful of interesting museums that range from archaeological discoveries of the region, to maritime history, and cultural features like bullfighting. There is also a large selection of beaches for those looking for a more relaxing getaway in the sun and sand.

The most emblematic sight of Santander is the Magdalena Palace which was once a summer residence for the Spanish king. Located on a peninsula of the same name, the palace stands in beautiful stone masonry overlooking the sea. Other architectural sights include a handful of churches and public buildings, historic streets and squares, and a number of peaceful parks. One of the more notable churches is the Catedral de Santa Maria de la AsunciÃ³n, or simply the Cathedral of Santander. Its impressive structure is mainly Gothic, though it has been extended and renovated over time.

In addition to the park surrounding the Magdalena Palace (which also has a zoo), another of Santander's more distinguished parks is the Parque de Cabo Mayor. Overlooking cliffs, the waves put on a spectacular show on windy days. The park is also home to the Faro de Cabo Mayor, the oldest lighthouse in Cantabria built in 1839. It is about 30m high, and is also the site of a museum at its base.

Santander is the city hub for the Cantabria region of Spain. Like any city it has plenty of opportunities for shopping, dining, and entertainment. One of the main stretches in the city center is the Paseo de Pereda y Calle Castelar, a 1550-meter stretch of road lined with cathedrals and historic buildings from the 18th to 20th centuries. It runs from the city center right down to the water where you can find great views of the harbor. Another nearby center is the Plaza de Jose Antonio or Plaza Pombo, which is a charming square featuring a musical bandstand and many colorful flowerbeds. Santander is a modern city, so if you seek something on the quainter side, take a day trip to the village of Santillana del Mar just 30 kilometers west of Santander. One of Spain's prettiest towns, Santillana del Mar and its cobbled streets are lined with palaces, churches, and balconies full of flowers. There are plenty of traditional shops selling local specialties, and it is nearby the UNESCO world heritage site of the Altamira caves for something a little different.

If it is outdoor adventure you seek, the area surrounding Santander has a full range of activities from hiking or skiing in the mountains to swimming and watersports along the beaches of the coastline. The Primera de El Sardinero is the most famous beach of Santander, while Somo Beach just outside of Santander is more secluded and less crowded than beaches in Santander. Some others include Playa de El Puntal, Playa de Bikinis, Playa de Covachos, and many more. Other activities along the water include sailing, yacht charter, picnics, and climbing the lighthouse at Cabo Mayor for breathtaking views of the bay.

There are also the sights of the city to explore, offering some great opportunities to admire old world architecture and become immersed in the culture that thrives today. If you prefer to get lost in the history of the region, spend your days wandering city streets and villages, exploring museums, or hopping on a tour for a more guided experience.

The northwest of Spain is an area bordered by coastline, making seafood and fish a common staple for dishes throughout the region. The Spanish word for seafood is "marisco," and fresh catches include things like clams, mussels, pod razors, cockles, crabs, barnacles, crayfish, snails, lobster, squid, sea bass, hake, scorpion fish, anchovies, sardines, and tuna. Pulpo a feira is a common seafood dish of octopus prepared with oil, salt, and hot paprika. Then there are empanadas-pies made with a traditional dough, filled with onion, pepper, and some meat, usually tuna, veal, or seafood. Some popular beverages include cider, wine, and orujo which is a type of pomace brandy. A great selection of dining options can be found in the city of Santander, especially in the district by the fishing harbor, Barrio Pesquero, if you're looking for seafood.

By plane, Santander Airport is the main point of entry, located 5 kilometers east of the city. It operates domestic flights, primarily from Madrid, and international flights with Ryanair from London, Dublin, Brussels, Rome, Milan, Frankfurt, Paris, and Amsterdam, plus other international flights to Bilbao.

By train, RENFE operates daily from Madrid and Alicante to Santander with stops in the main cities of Palencia, Valladolid, and Avila along the way. (5-6 hours from Madrid to Santander)

By car from Bilbao, travel the A8 Freeway.

Navigating within the region is best done by rental car if you wish to see some of the smaller villages. Public buses are also available to the larger towns as well as between Santander and Bilbao.