How much does it cost to travel to Chattanooga?

How much money will you need for your trip to Chattanooga? You should plan to spend around $145 per day on your vacation in Chattanooga, which is the average daily price based on the expenses of other visitors. Past travelers have spent, on average, $47 on meals for one day and $28 on local transportation. Also, the average hotel price in Chattanooga for a couple is $146. So, a trip to Chattanooga for two people for one week costs on average $2,033. All of these average travel prices have been collected from other travelers to help you plan your own travel budget.

A vacation to Chattanooga for one week usually costs around $1,017 for one person. So, a trip to Chattanooga for two people costs around $2,033 for one week. A trip for two weeks for two people costs $4,066 in Chattanooga. If you're traveling as a family of three or four people, the price person often goes down because kid's tickets are cheaper and hotel rooms can be shared. If you travel slower over a longer period of time then your daily budget will also go down. Two people traveling together for one month in Chattanooga can often have a lower daily budget per person than one person traveling alone for one week.

How much does a trip to Chattanooga cost? Is Chattanooga expensive? The average Chattanooga trip cost is broken down by category here. All of these Chattanooga prices are calculated from the budgets of real travelers.

Looking for a hotel in Chattanooga? Prices vary by location, date, season, and the level of luxury. See below for options.

How much does it cost to go to Chattanooga? Naturally, it depends on the dates. We recommend Kayak because they can find the best deals across all airlines.

The price of renting a car in Chattanooga will depends on dates, the type of car, the location, and your age. We recommend Kayak because they can find the best deals across all car rental companies.

What did other people spend on Transportation in Chattanooga?

Typical prices for Transportation in Chattanooga are listed below. These actual costs are from real travelers and can give you an idea of the prices in Chattanooga, but your costs will vary based on your travel style.

Chattanooga On a Budget 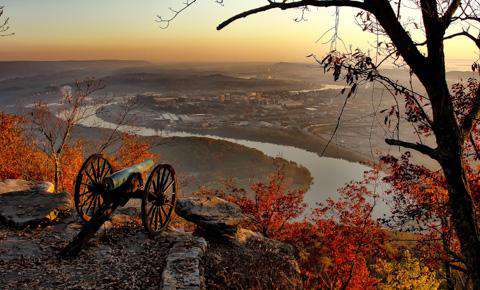 Chattanooga, Tennessee
Located on the Tennessee River near the border of the U.S. state of Georgia, Chattanooga is Tennessee's fourth largest city and a major transportation hub. The city has received national recognition for the renaissance of its once dilapidated downtown and redevelopment of its riverfront, including the restoration of the historic Walnut Street Bridge.

First built in 1890, Walnut Street Bridge is more than a century old. Following its restoration, the bridge has become a landmark for Chattanooga. Not only is it the oldest and largest surviving truss bridge in the southern United States, but it is also one of the world’s longest pedestrian bridges. Another iconic attraction of Chattanooga is Lookout Mountain. Located on the mountain is Rock City, which features a 4100-foot walking trail, a 90-foot waterfall, a 180-foot long suspension bridge, and Lover’s Leap where visitors can "see seven states." Another special attraction to Lookout Mountain is Ruby Falls, actually falling within the mountain with a 145-foot drop. There is an elevator ride down into the caverns of the falls with cave tours available. The Incline Railway shuttles passengers up a steep incline to the top of the mountain for spectacular views of the valley and river below.

The city also features a good number of parks, museums, and other attractions. The Tennessee Aquarium, for example, showcases a variety of aquatic life with two main buildings: "Ocean Journey" and "River Journey." There is also a Chattanooga Zoo and a variety of popular museums, including the Hunter Museums of American Art, the Creative Discovery Museum, and the Tennessee Valley Railroad Museum. As far as parks go, Coolidge Park is a central green space for the city, featuring a beautifully restored carousel, a pavilion, an interactive play fountain, and plenty of open space where the Navy and Marine Reserve Center once stood.

Downtown Chattanooga is a hub for tourists, and all of the downtown attractions, hotels, restaurants, shopping venues, and convention center are conveniently connected by a free, electric shuttle operated by the Chattanooga Area Regional Transportation Authority (CARTA). Alternatively, visitors can also use a bike share program to navigate downtown. Walnut Street Bridge connects the downtown with the now thriving Northshore District. Located on the north shore of the Tennessee River, the Northshore District has grown and developed to become a Chattanooga focal point with Coolidge Park as one of the city's most popular green spaces and Frazier Avenue serving as the main street of this area. The Southside District is still being developed and offers some off-the-beaten path markets and galleries, while St. Elmo District offers a quaint, historic hub at the foot of Lookout Mountain with a walkable residential area featuring several small boutique shops and restaurants.

There are plenty of activities for visitors both in and on the outskirts of the city, from the bustling downtown hub of the city below to the nature excursions on Lookout Mountain above. There is even a climbing wall in Coolidge Park where visitors can climb on one of the limestone towers that supports the Walnut Street Bridge. Pedestrians can also enjoy the riverfront along the Tennessee River Walk, a 10-mile path that stretches from Ross’s Landing in the heart of downtown Chattanooga to the Tennessee Riverpark and the Chickamauga Dam. There are plenty of opportunities along the path for picnicking and enjoying the greenery. Other activities include riverboat rides, walking tours, golf, shopping, theatre-going, festivals, and sporting events.

Barbeque is common throughout the southern United States, and Tennessee has many varieties of it depending on where you are in the state. Visitors will likely be able to find all kinds of barbeque in Chattanooga though it typically consists of a grilled or smoked meat (pork is a favorite) served in a thick and sweet sauce. BBQ ribs and pulled pork sandwiches topped with slaw are common and the sauce is usually some combination of thick and sweet and tangy with a zip. Other examples of Southern home cooking that can likely be found in Chattanooga include fried chicken, catfish, country ham, buttermilk biscuits and gravy, cornbread, fried pickles, and banana pudding. Often classified as Soul food, these dishes and other favorites like po'boy, hush puppies, and mac and cheese are widespread in the southern United States. As a major city, Chattanooga also has a plethora of restaurants serving international fare as well, from Japanese, Chinese, and Korean, to Mediterranean, Italian, and Mexican.

By car, use highways I-75, I-24, or I-59. Long distance buses that serve Chattanooga include Greyhound and Megabus. The city is also accessible via the Tennessee River by personal water craft.