How much does it cost to travel to Cincinnati?

How much money will you need for your trip to Cincinnati? You should plan to spend around $146 per day on your vacation in Cincinnati, which is the average daily price based on the expenses of other visitors. Past travelers have spent, on average, $44 on meals for one day and $20 on local transportation. Also, the average hotel price in Cincinnati for a couple is $163. So, a trip to Cincinnati for two people for one week costs on average $2,050. All of these average travel prices have been collected from other travelers to help you plan your own travel budget.

A vacation to Cincinnati for one week usually costs around $1,025 for one person. So, a trip to Cincinnati for two people costs around $2,050 for one week. A trip for two weeks for two people costs $4,100 in Cincinnati. If you're traveling as a family of three or four people, the price person often goes down because kid's tickets are cheaper and hotel rooms can be shared. If you travel slower over a longer period of time then your daily budget will also go down. Two people traveling together for one month in Cincinnati can often have a lower daily budget per person than one person traveling alone for one week.


How expensive is Cincinnati? How much money do I need for Cincinnati?

How much does a trip to Cincinnati cost? Is Cincinnati expensive? The average Cincinnati trip cost is broken down by category here. All of these Cincinnati prices are calculated from the budgets of real travelers.

Looking for a hotel in Cincinnati? Prices vary by location, date, season, and the level of luxury. See below for options.

How much does it cost to go to Cincinnati? Naturally, it depends on the dates. We recommend Kayak because they can find the best deals across all airlines.

The price of renting a car in Cincinnati will depends on dates, the type of car, the location, and your age. We recommend Kayak because they can find the best deals across all car rental companies.

Tips and Handouts Budget in Cincinnati

Cincinnati On a Budget 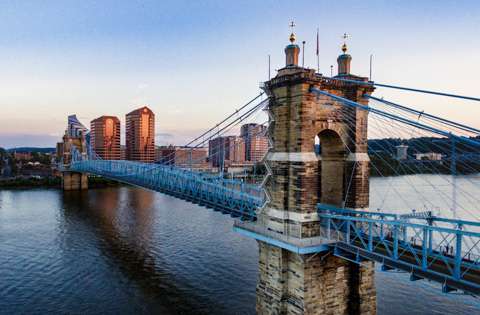 Cincinnati, OH
Located on the north banks of the Ohio River, Cincinnati is the third largest city in Ohio having grown from its industrial heritage. It is situated in the southwest part of the state, separated from the Kentucky border by the river. The city is best known for its striking skyline and unique chili.

The Ohio River is the heart of the city, adding an extra glimmer of beauty to the city's stunning skyline and historically boosting Cincinnati's industrial economy. It is actually the largest tributary of the Mississippi River and today hosts a lively riverboat heritage. During the city's Tall Stacks Festival people celebrate the days when steam and paddle-wheel driven vessels dominated the waters. The John A. Roebling Suspension Bridge also adds something special to the beauty of the cityscape. Some of the best skyline and river views can be had from the Moerlein Lager House. Other city views can be had from the Carew Tower & Observation Deck-Cincinnati's second tallest building.

Another popular attraction is the Cincinnati Zoo & Botanical Garden, which is actually the second oldest zoo in the United States opening in 1875-just 14 months after the Philadelphia Zoo. The park features more than 3,000 plant species, wildlife exhibits, rides, and a 4D theatre. Though technically outside of Cincinnati, located just across the river, the Newport Aquarium is another popular animal life attraction.

Other Cincinnati sights worth noting include the Cincinnati Observatory Center, Fountain Square, Spring Grove Cemetery and Arboretum, a number of churches and cathedrals, the American Classical Music Hall of Fame, Cincinnati Art Museum, National Underground Railroad Freedom Center, and countless other museums, galleries, theatres with plenty of opportunities to experience the art, culture, and history of the city.

Downtown marks the city center of Cincinnati, also referred to as the Central Business District. Most of the city's major attractions and corporate headquarters are located here. This part of the city is organized on a grid pattern with nine main north-south thoroughfares-Broadway, Sycamore, Main, Walnut, Vine, Race, Elm, Plum, and Central. The "East Side" and "West Side" of the city have a rivalry, historically being white collar and blue collar workers respectively. Other notable neighborhoods include the residential Avondale home to the Cincinnati Zoo, the upscale Hyde Park home to restaurants and boutique shops, trendy Mt. Adams known for its nightlife and beautiful skyline views, the very diverse Clifton home to a University population, independent shops, and a variety of ethnic restaurants, Over-the-Rhine historic district, the also historic Price Hill, and the newly developed Riverfront. Mt Washington, Northside, and Oakley are also all up-and-coming neighborhoods with plenty of shopping and restaurant options. And even though Newport and Covington are across the river in Kentucky, many locals frequent these spots on the weekends for shopping, movies, festivals, and restaurants.

Visitors are free to explore the sights of Cincinnati at their own pace, or join any variety of tours that are offered. From historic walking tours that admire architecture and landmark events of the city to lager tours that explore saloons, bars, and breweries, there is a tour for any preference. The arts and entertainment scene is also alive with opportunities to enjoy opera, symphony, theatre, and a number of festivals held throughout the year, as well as plenty of opportunities to get outdoors with multiple city parks.

Being a major American city, Cincinnati will have just about any kind of food one could ask for, from major well-known restaurant and fast food chains to specialty international options like Chinese, Japanese, Italian, Mexican, Indian, and many more. The city, however, is famous for its unique chili. The recipe typically contains finely-ground meat, no beans or onions, and spices such as cinnamon or cocoa powder, with not as much tomato as traditional recipes. It is served in a variety of ways. A three-way is served over spaghetti with shredded cheddar cheese, a four-way adds diced white onions or kidney beans, a five-way adds both onions and kidney beans, and a cheese coney is served on a hot dog with shredded cheddar. The concentration of chili restaurants in Cincinnati is more than anywhere else in the U.S., the favorites often being Skyline and Gold Star, though there are many others.

For visitors flying in, Cincinnati/Northern Kentucky International Airport is the main way of entry. It is actually located on the Kentucky side of the Ohio River, so visitors will have to cross a bridge upon arrival to reach Cincinnati. The airport is a major hub for Delta, which offers daily flights to major U.S. cities as well as direct service to Paris. Within the United States, low-cost airlines Allegiant and Frontier also provide daily service.

Trains and long-distance buses are other options for travel. By train, passenger trains stop at Union Terminal/Cincinnati Museum Center in the night, traveling east to Washington DC and New York, and west to Chicago. Many visitors within the U.S. also arrive by car.