How much does it cost to travel to Minneapolis?

How much money will you need for your trip to Minneapolis? You should plan to spend around $164 per day on your vacation in Minneapolis, which is the average daily price based on the expenses of other visitors. Past travelers have spent, on average, $32 on meals for one day and $34 on local transportation. Also, the average hotel price in Minneapolis for a couple is $176. So, a trip to Minneapolis for two people for one week costs on average $2,302. All of these average travel prices have been collected from other travelers to help you plan your own travel budget.

A vacation to Minneapolis for one week usually costs around $1,151 for one person. So, a trip to Minneapolis for two people costs around $2,302 for one week. A trip for two weeks for two people costs $4,603 in Minneapolis. If you're traveling as a family of three or four people, the price person often goes down because kid's tickets are cheaper and hotel rooms can be shared. If you travel slower over a longer period of time then your daily budget will also go down. Two people traveling together for one month in Minneapolis can often have a lower daily budget per person than one person traveling alone for one week.

How much does a trip to Minneapolis cost? Is Minneapolis expensive? The average Minneapolis trip cost is broken down by category here. All of these Minneapolis prices are calculated from the budgets of real travelers.

How much do vacation rentals cost in Minneapolis? Prices vary by location, date, size of the place, and the level of luxury. See below for options.

How much does it cost to go to Minneapolis? Naturally, it depends on the dates. We recommend Kayak because they can find the best deals across all airlines.

The price of renting a car in Minneapolis will depends on dates, the type of car, the location, and your age. We recommend Kayak because they can find the best deals across all car rental companies.

Minneapolis On a Budget 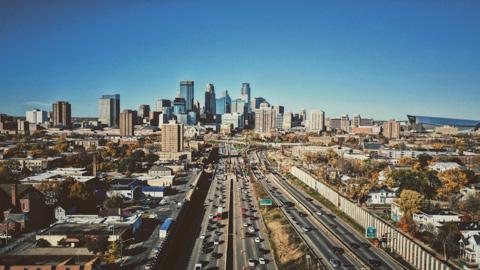 Minneapolis, Minnasota
Known as one of the Twin Cities with its neighbor, Saint Paul, the Minneapolis area is the second largest economic center in the Midwest, behind Chicago. Originally a city of lumber and flour milling, the city has grown to prosper in commerce, rail and trucking, health care, industry, education, publishing, milling, and food processing amongst others. In addition to housing the headquarters for five Fortune 500 Companies, Minneapolis is a city of thriving culture. From visual arts, music, and theater to sporting events and award-winning restaurants, the entertainment is never lacking.

Being abundantly rich in water, with twenty lakes and wetlands, the Mississippi River, creeks, and waterfalls, Minneapolis is also a hub for parks and outdoor activities. Though Saint Paul is Minnesota's Capital, Minneapolis is its largest city, rich in industry, entertainment, culture, and natural beauty.

Minneapolis is a city of nature meets skyscrapers - the skyline tall and glimmering with parks dotted throughout and beautiful bridges stretching across the Mississippi River. The architecture is also varied, melding with the culture and art of the city. For example, the Minneapolis Institute of Arts presents a model of Romanesque architecture with a large collection of historic cultural works within, while the Frederick R Weisman Art Museum at the University of Minnesota stands out as a shapeless stainless steel structure containing more contemporary works from the 20th Century to the present.

A walk through the Minneapolis Sculpture Garden offers an outdoor art experience, displaying sculptures of the Walker Art Center in an 11-acre urban green space, the most famous being Claes Oldenburg's "Spoonbridge and Cherry." There are many parks and green areas throughout Minneapolis, offering a natural escape from the urban side of things. A day exploring the city might bring you past some historic structures like train stations, towers, and warehouses, or lead you down to the Mississippi River, where you can walk along one of the bridges and maybe catch a glimpse of the St. Anthony Falls, or Mill City Museum with the Gold Medal Flour sign glowing neon from above. With so much to see and do, you can spend several days here any time of the year. For more inspiration, check out this list of things to do in Minneapolis.

Downtown Minneapolis is a hub of activity for visitors and residents alike. It is divided into Downtown West with skyscrapers, Nicollet Mall, and the Warehouse district, and Downtown East with the historic mill district, the Metrodome, and a mix of residential and commercial buildings. The general area, located just south of the Mississippi River, is home to most of the city's skyscrapers and major attractions. It is the place where the Fortune 500 companies operate, as well as the theater and arts district, shopping hub, sporting events, restaurants, and nightlife. Other major attractions near the downtown neighborhood area include the Walker Art Center and Sculpture Garden, the Weisman Art Museum, the Minneapolis Institute of Arts, the Children's Theater Company, and the Minneapolis Convention Center.

The city of Minneapolis has so many opportunities to experience the arts. Visitors often frequent the many galleries and museums mentioned earlier, attend sporting events at the Hubert H. Humphrey Metrodome or the Target Center (ball park of the Minnesota Twins), or see shows in the historic theaters of the Hennepin Theatre District. The Guthrie Theater, right on the Mississippi in Downtown East, also holds classic and contemporary productions, remaining true to its commitment to offer productions of Shakespeare's plays as well.

On the nature side of things, Minnehaha Park is located to the southeast of the city along the banks of the Mississippi. The 193 acre park is one of the oldest and most popular in the city and is home to the 55-foot high Minnehaha Falls, as well as statues of Hiawatha and Minnehaha, the chief characters in Longfellow's "Song of Hiawatha." Lake Harriet is another natural attraction of the city, covering an area of 335 acres plus surrounding park area. Bike and boat rentals are available in the park, with activities ranging from sailing, beaches, and fishing to a system of bike and pedestrian trails. If that isn't enough, you can visit Minneapolis' Chain of Lakes-four of the largest lakes in Minneapolis lined with 13 miles of paved shoreline paths.

Just south of Minneapolis, there is also the Mall of America in Bloomington. It is the largest mall in the United States with an indoor amusement park, more than 500 stores, an aquarium, a movie theater, wedding chapel, and plenty of dining options. All in all it covers 4.2 million square feet and even has its own zip code.

Like any major city, Minneapolis cuisine reflects a diverse array of ethnic influences. While comfort foods like hearty soups, stews, and meat and potato dishes are popular with Minnesota natives, this and more can be found in the city areas. American restaurants range from your typical fast food and small diners to sports bars, steakhouses, pizzerias, and farm-to-table eateries. There are also restaurants with eastern European influence as well as authentic French, Irish, Italian, Russian, and Asian cuisine. In 2012, Food & Wine magazine named Minneapolis the nation's best and best-priced new food city, and it 2015 it named Spoon and Stable (trendy, French-inspired hangout) one of five 2015 Restaurants of the Year.

By air, Minneapolis-Saint Paul International Airport is the closest airport, located on the southeast border of the city. The airport services three international, 12 domestic, seven charter and four regional carriers, and is a hub and home base for Delta Air Lines, Mesaba Airlines, and Sun Country Airlines.

Locally, the METRO Blue Line serves 34,000 riders daily and connects the Minneapolis-Saint Paul International Airport and Mall of America in Bloomington to downtown.

The METRO Green Line shares stations with the Blue Line in downtown Minneapolis, and then at the Downtown East station, travels east through the University of Minnesota, and then along University Avenue into downtown Saint Paul.

The 40-mile Northstar Commuter rail runs from Big Lake through the northern suburbs and terminates at the transit station at Target Field.

While many locals navigate the city by bicycle, Minneapolis also has a seven-mile system of pedestrian bridges called skyways, as well as a bus line run by Metro Transit.