How much does it cost to travel to Rapid City?

How much money will you need for your trip to Rapid City? You should plan to spend around $93 per day on your vacation in Rapid City, which is the average daily price based on the expenses of other visitors. Past travelers have spent, on average, $19 on meals for one day and $42 on local transportation. Also, the average hotel price in Rapid City for a couple is $96. So, a trip to Rapid City for two people for one week costs on average $1,299. All of these average travel prices have been collected from other travelers to help you plan your own travel budget.

A vacation to Rapid City for one week usually costs around $650 for one person. So, a trip to Rapid City for two people costs around $1,299 for one week. A trip for two weeks for two people costs $2,599 in Rapid City. If you're traveling as a family of three or four people, the price person often goes down because kid's tickets are cheaper and hotel rooms can be shared. If you travel slower over a longer period of time then your daily budget will also go down. Two people traveling together for one month in Rapid City can often have a lower daily budget per person than one person traveling alone for one week.


How expensive is Rapid City? How much money do I need for Rapid City?

How much does a trip to Rapid City cost? Is Rapid City expensive? The average Rapid City trip cost is broken down by category here. All of these Rapid City prices are calculated from the budgets of real travelers.

Looking for a hotel in Rapid City? Prices vary by location, date, season, and the level of luxury. See below for options.

How much does it cost to go to Rapid City? Naturally, it depends on the dates. We recommend Kayak because they can find the best deals across all airlines.

The price of renting a car in Rapid City will depends on dates, the type of car, the location, and your age. We recommend Kayak because they can find the best deals across all car rental companies.

Rapid City On a Budget 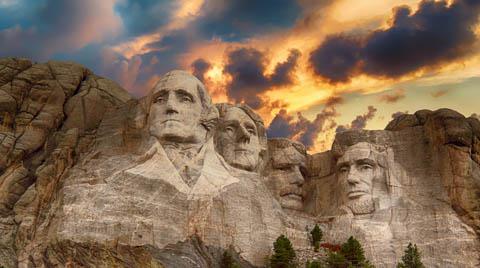 Mount Rushmore, near Rapid City, South Dakota
Rapid City is a large city in western South Dakota that is considered the gateway to the Black Hills National Forest. Rapid City is often used as a base for all types of outdoor activities, including tours to the infamous Mount Rushmore and surrounding parks. The city has a budding art scene and offers the perfect combination of a metropolitan city surrounded by stunning natural scenery. Rapid City experiences the best weather from June-September with temperatures in the 70's and 80's Fahrenheit. Temperatures drop to the low 20's F in the winter and the area receives the most rain pour in April and May.

The most popular sight in the Rapid City area is Mount Rushmore, the infamous monument of four presidents carved from the rocky mountain inside of the Black Hills Forest. After viewing the monument, you can wander through the Black Hills to Rushmore Cave where you'll find a stalactite filled cavern. Then, continue on to the Jewel Cave National Monument, the third longest cave in the world with over 180 miles of passageways that wind through the cave. After an adventure through the Black Hills, head into town to view Art Alley, a public art project that incorporates work from both local and visiting artists. Then, during summer, enjoy a movie in the park under the stars.


Neighborhoods and Nearby Areas

Rapid City's major neighborhood is the Downtown area where the majority of sights, activities, restaurants, and hotels are located. The other neighborhoods in Rapid City are mainly residential or commercial and of little interest to tourists.

West and South of the city is the Black Hills National Forest and Custer State Park, which is home to Mount Rushmore and countless hiking trails and outdoor activities. Here you can also find enormous amounts of wildlife. The famous Mount Rushmore draws lots of visitors who then stay on for the other nearby attractions.

The Crazy Horse Memorial is not far from Mount Rushmore and is a monument to the Native Americans, their history, and their culture.

Southeast of the city is Badlands National Park, a popular spot for adventure enthusiasts thanks to its rugged landscape that is perfect for hikers, campers, and wildlife viewers.

Rapid City acts as the perfect base camp for going on all sorts of outdoor adventures. Right outside the city is the Black Hills National Forest where you can go hiking, rock climbing, and cycling. For the adventure enthusiasts, go to the Badlands, a rugged natural area with twisted canyons, slanted walls, and rock domes that create the perfect place for exploring. For something more relaxed, you can go boating, fishing, or swimming in one of the 17 lakes in the area. Rapid City also hosts many annual festivals, including the Art and Wine Festival that features locally sourced wine and artwork from local artists. In summertime, you can relax downtown and enjoy the Main Street Square Summer Concerts or the Native People of the Plains arts and culture weekend in July.

Rapid City has a wide range of restaurant options and cuisines, including American, Chinese, and Japanese. Many restaurants serve buffalo meat, with buffalo hamburgers being one of the most popular buffalo dishes. For something with a local feel, head to the Firehouse Brewing Company, which is located inside of the original Rapid City firehouse that was built in 1915. The restaurant serves American cuisine and features original memorabilia, the original fire pole, and even offers beautiful views of downtown Rapid City from the patio. Combine fine dining with a casual atmosphere at Wine Cellar Restaurant where you'll find a huge wine and beer menu nestled in a historic building.

Rapid City is served by the Rapid City Regional Airport, a domestic airport that accepts flights from a select few major US airlines. From the airport, you can take a shuttle or a rent a car to get into the city. It is also easy to drive into the city or take a bus from larger cities. You can easily get around the city on foot, or take the Rapid Ride System which takes you to areas further outside of the city including Mount Rushmore. Keep in mind that the rail system closes between 6 PM and 6 AM, but there are plenty of taxis in the area that run when the rail system doesn't.