How much does it cost to travel to Cleveland?

How much money will you need for your trip to Cleveland? You should plan to spend around $106 per day on your vacation in Cleveland, which is the average daily price based on the expenses of other visitors. Past travelers have spent, on average, $29 on meals for one day and $15 on local transportation. Also, the average hotel price in Cleveland for a couple is $121. So, a trip to Cleveland for two people for one week costs on average $1,478. All of these average travel prices have been collected from other travelers to help you plan your own travel budget.

A vacation to Cleveland for one week usually costs around $739 for one person. So, a trip to Cleveland for two people costs around $1,478 for one week. A trip for two weeks for two people costs $2,955 in Cleveland. If you're traveling as a family of three or four people, the price person often goes down because kid's tickets are cheaper and hotel rooms can be shared. If you travel slower over a longer period of time then your daily budget will also go down. Two people traveling together for one month in Cleveland can often have a lower daily budget per person than one person traveling alone for one week.


How expensive is Cleveland? How much money do I need for Cleveland?

How much does a trip to Cleveland cost? Is Cleveland expensive? The average Cleveland trip cost is broken down by category here. All of these Cleveland prices are calculated from the budgets of real travelers.

Looking for a hotel in Cleveland? Prices vary by location, date, season, and the level of luxury. See below for options.

How much does it cost to go to Cleveland? Naturally, it depends on the dates. We recommend Kayak because they can find the best deals across all airlines.

The price of renting a car in Cleveland will depends on dates, the type of car, the location, and your age. We recommend Kayak because they can find the best deals across all car rental companies.

What did other people spend on Transportation in Cleveland?

Typical prices for Transportation in Cleveland are listed below. These actual costs are from real travelers and can give you an idea of the prices in Cleveland, but your costs will vary based on your travel style.

What did other people spend on Food in Cleveland?

Typical prices for Food in Cleveland are listed below. These actual costs are from real travelers and can give you an idea of the prices in Cleveland, but your costs will vary based on your travel style.

Tips and Handouts Budget in Cleveland

What did other people spend on Alcohol in Cleveland?

Typical prices for Alcohol in Cleveland are listed below. These actual costs are from real travelers and can give you an idea of the prices in Cleveland, but your costs will vary based on your travel style.

Cleveland On a Budget 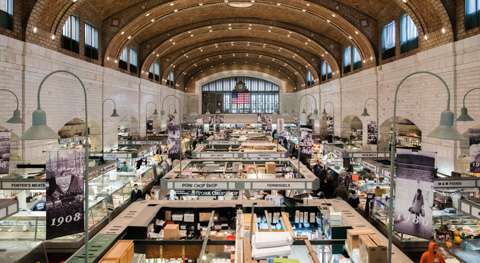 Cleveland, OH
Located on the shores of Lake Erie of the Great Lakes, Cleveland is the second largest city in the U.S. state of Ohio. As a culturally diverse and thriving metropolitan area, the city is host to a vast range of sights and activities, such as world-class museums, cultural events, professional sports, and golf courses as well as plenty of dining, shopping, and entertainment opportunities.

Having boomed throughout the Industrial Revolution, Cleveland has a proud manufacturing history that is largely represented in a concentration of historical landmarks located in University Circle near the Downtown. One of the attractions here includes the Western Reserve Historical Society where two 20th-century mansions exhibit Cleveland's history as well as the Crawford Auto-Aviation Museum and an extensive Cleveland historical research library. The area is also host to the Cleveland Museum of Art, Cleveland Museum of Natural History, Cleveland Cultural Gardens (in Rockefeller Park), Cleveland Botanical Garden, and Lake View Cemetery where many famous people are buried, such as President James A. Garfield and John D. Rockefeller.

Cleveland is also nicknamed the “Rock n Roll Capital” due to the Rock and Roll Hall of Fame, located Downtown. This museum is a must-see for visitors and locals alike, archiving the history of the best-known and most influential artists, producers, and other notable figures in rock and roll. Another of Cleveland's nicknames is the "Forest City" because of it parks and forested areas. The largest of these areas within the city is Rockefeller Park, which features the Cultural Gardens, a greenhouse, a seven-mile stream, and landmark late 19th-century bridges.

The three main districts of Cleveland are Downtown, East Side, and West Side. Downtown Cleveland hugs Lake Erie near the mouth of the Cuyahoga River. It is further divided into individual neighborhoods and Cleveland State University, and is the most convenient location for accommodations during a visit due to its central location and proximity to plenty of dining, shopping, and entertainment. East Side indicates the portion of the city that lies to the east of the river, while West Side indicates the portion to the right of the river. Both are broken down into an assortment of individual neighborhoods. East Side is known for its cultural and arts complex, while West Side is home to the airport and West Side market. While most of Cleveland's neighborhoods are walkable with plenty of restaurants, shopping, galleries, and cafes a few worthy of note include Tremont for its art scene of galleries, theatres, and cafes, Ohio City for its microbreweries, eclectic shops, and cafes, and Coventry Village for its metropolitan experience of locally-sourced food, antique shops, and retail locations.

Aside from its parks and historical heritage, Cleveland also puts on a number of cultural events, big and small, throughout the year-especially in the arts districts. Entertainment ranges from theatre, dance, and music to gallery showings, exhibits, and much more. Another unique experience is the West Side Market, where visitors can buy artisan goods, fresh produce, baked goods, and prepared food. This is just one of many smaller varieties of markets throughout the city. Movie fans also make it a point to visit the Christmas Story House in the Tremont neighborhood, which has been restored to an accurate portrayal of the house in the movie, both inside and out.

Other activities include a packed schedule of professional sporting events, the most golf courses per capita in the United States, and a plethora of lake activities including boating, sailing, fishing, swimming, and a full range of water sports. Just outside the Cleveland area there are also miles of trails for hiking, biking, and horseback riding in what is known as the Emerald Necklace, boosting Cleveland's "Forest City" status.

Being a major American city, Cleveland has just about any kind of food one could ask for, from major well-known restaurant and fast food chains to specialty international options like Chinese, Japanese, Thai, Italian, Mexican, Indian, Mediterranean and many more. There are also a number of vibrant markets with ethnic food options, as well as world-class restaurants, especially in the Downtown area. Other neighborhoods with premiere dining opportunities include the Historic Warehouse District, the Flats, Ohio City, Tremont, the Gateway Neighborhood, and along the Restaurant Row in the East Side suburbs. Italian-American bakeries are also abundant throughout the city, serving sweet handmade pastries and donuts, but a Cleveland specialty is the Cleveland-style Cassata Cake made with strawberries and rich custard. Another local favorite is the Polish Boy or Po' Boy, which consists of kielbasa and sauerkraut on a hot dog bun typically topped with hot sauce and served with french fries.

The city is served by Cleveland Hopkins International Airport, located about 13 miles southwest of Downtown. Easy transportation between the airport and Downtown Cleveland is available via the RTA Red Line Rapid Transit for just a few dollars. The next nearest airport is Akron-Canton Airport, located 50 miles south of Cleveland in Akron.

Many visitors also arrive by car via one of the four main Interstate highways-71, 77, 80, or 90. Amtrak trains and long-distance buses also arrive in Cleveland.

Rock and Roll Hall of Fame

By Bryan
If you're in Cleveland you must visit the Rock and Roll Hall of Fame (751 Erieside Ave). It's at the North Coast Harbor. The museum itself is an interesting architectural building designed by noted architect I.M. Pei. As expected, it houses an amazing collection of rock and roll memorabilia. After all, Cleveland was home to the first Rock concert, the term "Rock and Roll" was coined by a Cleveland DJ, and Cleveland was a launchpad for many of the music genre's icons. Admission is $22 for adults with various discounts for Seniors and Children. (8 & under are free.)