How much does it cost to travel to Saint Louis?

How much money will you need for your trip to Saint Louis? You should plan to spend around $147 per day on your vacation in Saint Louis, which is the average daily price based on the expenses of other visitors. Past travelers have spent, on average, $43 on meals for one day and $21 on local transportation. Also, the average hotel price in Saint Louis for a couple is $162. So, a trip to Saint Louis for two people for one week costs on average $2,063. All of these average travel prices have been collected from other travelers to help you plan your own travel budget.

A vacation to Saint Louis for one week usually costs around $1,032 for one person. So, a trip to Saint Louis for two people costs around $2,063 for one week. A trip for two weeks for two people costs $4,126 in Saint Louis. If you're traveling as a family of three or four people, the price person often goes down because kid's tickets are cheaper and hotel rooms can be shared. If you travel slower over a longer period of time then your daily budget will also go down. Two people traveling together for one month in Saint Louis can often have a lower daily budget per person than one person traveling alone for one week.

How much does a trip to Saint Louis cost? Is Saint Louis expensive? The average Saint Louis trip cost is broken down by category here. All of these Saint Louis prices are calculated from the budgets of real travelers.

How much do vacation rentals cost in Saint Louis? Prices vary by location, date, size of the place, and the level of luxury. See below for options.

How much does it cost to go to Saint Louis? Naturally, it depends on the dates. We recommend Kayak because they can find the best deals across all airlines.

The price of renting a car in Saint Louis will depends on dates, the type of car, the location, and your age. We recommend Kayak because they can find the best deals across all car rental companies.

What did other people spend on Entertainment in Saint Louis?

Typical prices for Entertainment in Saint Louis are listed below. These actual costs are from real travelers and can give you an idea of the prices in Saint Louis, but your costs will vary based on your travel style.

Saint Louis On a Budget 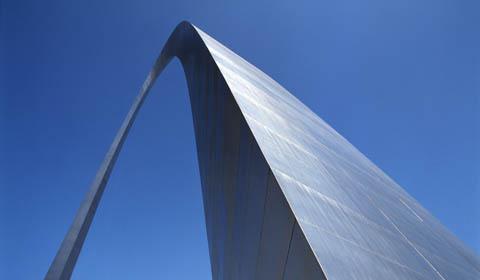 The Gateway Arch in St. Louis, Missouri
Nicknamed the "Gateway to the West" and perhaps best known for its iconic Gateway Arch, St. Louis, Missouri, has grown from a last stop for pioneers journeying west to a thriving metropolis notable for its diverse culture, impressive architecture, and unique neighborhoods. It sits on the Mississippi River and has plenty to offer in dining, shopping, sight-seeing, and entertainment.

Beyond the Gateway Arch (a tribute to the early 19th-century explorations of Lewis and Clark and America's westward expansion), St. Louis is home to a number of monuments, museums, parks, and other attractions unique to the city. The St. Louis Zoo, for example, is recognized as one of the top five zoos in the nation. It is located in Forest Park, one of the nation's largest city parks with 1,293 acres, open to the public for activities like golf, tennis, baseball, bicycling, boating, fishing, handball, ice skating, in-line skating, jogging, cricket, rugby, and more. The park is also home to the St. Louis Science Center and the Missouri History Museum, and was historically the site of the 1904 Louisiana Purchase World's Fair.

Other top sights include the Missouri Botanical Garden, the Cathedral Basilica of St. Louis (known especially for its mosaic art), the City Museum (which is more of an architectural playground with mazes, obstacle courses, tunnels, airplanes suspended in midair, and chutes and ladders), and the St. Louis Art Museum.

St. Louis has one of America's most distinctive neighborhood cultures, each community upholding its own individual flare. Downtown makes up the central business district of the city, featuring all three professional sporting teams' stadiums, dozens of hotels, corporate headquarters, dining and shopping, entertainment, nightlife, and the famous Gateway arch. Laclede's Landing, on the city's eastern edge, is one of the oldest standing neighborhoods of the city with cobblestone streets, horse-drawn carriage rides, live music, restaurants, and bars. Soulard is another of St. Louis' old neighborhoods, known for its red brick architecture, barbeque restaurants, and blues music clubs, while Lafayette Square is also nearby featuring tree-lined streets with shopping, dining, and a number of bed and breakfasts. These are just a few of the 79 government-designated neighborhoods within the City of St. Louis. Some others include the historic Old North Saint Louis, the arts, theatre, and museum district of Grand Center/Midtown, the upscale Central West End, St. Louis' Little Italy at The Hill, and the historic African-American neighborhood of North St. Louis.

In addition to exploring some of the top attractions - museums, parks, and architecture included - St. Louis is a great place to get lost in the cultures of each distinctive neighborhood. The descriptions above give some insight into the top districts, the Central West End, Laclede's Landing, and Soulard being especially popular with visitors. Additional parks worth visiting include the one at Lafayette Square (the oldest in the city, chartered in 1806), Laumeier Sculpture Park, and South Grand and Tower Grove Park (which features bike paths, playgrounds, a wading pool, several restored Victorian pavilions, and seasonally hosts a Farmer's Market and festivals).

Other activities including movies, Mississippi River cruises, sporting events, and musical performances from jazz to folk, classical, and more.

Cuisine of St. Louis has a long history and broad range of influences including Italian, German, Irish, and French, amongst others - making the food culture of the city a true melting pot of America. Unique to the city are specialized forms of traditional favorites like pizza, barbecue, ravioli, pork, and pastries. St. Louis-style pizza, for example, is made with Provel cheese on a super thin crust, while toasted ravioli is breaded and toasted dry or fried rather than the more common method of boiling. As far as barbeque goes, it usually involves direct grilling with a sweet, sticky, and acidic tomato-based sauce and one of two cuts - slow-cooked pork steak and St. Louis-style spare ribs. Gooey Butter Cake is one of the best-loved pastries, while Ted Drewes Frozen Custard is another favorite dessert with locals.

By plane, the largest airport serving St. Louis is the LambertâSt. Louis International Airport, located about 14 miles northwest of the city center. It is directly served by the MetroLink light rail line.

The city is also served by Amtrak for train transportation, as well as Greyhound and Megabus for long distance bus transportation. The bus terminal and train station are located next to each other around S. 15th Street.

By Bryan in Entertainment
The Gateway Arch, part of the Jefferson National Expansion Memorial, is located along the Mississippi River in the middle of downtown. It's the world's tallest national monument, built to be a symbolic gateway to the west. To get to the top, You ride a special elevator designed to make the curving trip up into the arch. In the structure underneith the arch is a musuem showcasing the history and construction of the arch as well as the history of the region and the west. There is also an innovative historical museum under the Arch. Don't miss the movie, "Monument to the Dream," about the building of the Arch. From the top you can see for miles on a clear day, including all of downtown St. Louis and the Mississippi River. The Old Courthouse and Old Cathedral are nearby.