What are the cheapest and most expensive countries to visit in Asia?

The following travel cost rankings for countries in Asia are calculated based on the travel budgets of real travelers. Also referred to as a Travel Cost Index, or a Backpacker Index, the countries below are in order from most to least expensive by their average daily travel price, per person, per day

What are the cheapest countries to visit in Asia?

What are the most expensive countries to visit in Asia?

Asia is a real sensory overload experience. Mysterious aromas, bizarre spectacles, mouth-watering delicacies, deafening commotion, your senses are really pushed to the max in Asia. Cheap, yet delicious food is all around you. Even though it can often be a mystery to what exactly it is you are eating, Asia has some of the richest cuisine in the world. If you're a foodie, this is the place to be. From Tokyo with its 35 million inhabitants to Ho Chi Minh City with its 2 million honking mopeds, big, buzzing Asian cities really are an experience to behold. Discover the diversity in Kuala Lumpur and Singapore, massive skyscrapers in Shanghai and Hong Kong and utter chaos in Bangkok and Mumbai or any Indian city for that matter. If you like a bargain head to the local market, where they sell everything you can think of! Asia also has a wide range of nightlife. Modern cities like Hong Kong and Singapore provide great bars and clubs, but the most fascinating nightlife can be found near the beaches. From party islands to chill out islands, dive islands or fishing islands, South East Asia will spoil you in terms of tropical island paradises. There is also pretty much a festival every day in Asia and you might end up walking into the middle of one unknowingly. Not only does Asia make up 60% of the world population, it's also been the birthplace for many religions. This cultural richness means that impressive and fascinating architecture, from old to new, is all around you in each country you decide to travel to. Asia is so big you can explore many seasons in a single trip. You could be spending a Christmas walking barefoot on the fabulous beaches of Bali, only to be found shredding the snow in Japan a few days later. The mountains of the Himalayas, that cross Nepal and separate China from India, provide some of the most challenging treks in the world. For those less adventurous, the jungles of Southeast Asia provide some brilliant treks as well.

Some of the most picturesque and relaxing places can be found in Asia. For a long time, taking a trip to Asia was seen as a budget-traveller's heaven. However, there are also many expensive cities, mostly in East Asia and in Japan. Kyoto is one of the only city in Asia which is overall more expensive to live in than New York. Tokyo, Japan's capital and the largest city on the planet as well as Osaka, Japan's second-largest metropolitan area are also very expensive. Singapore is no stranger to international recognition, however, with great economic success comes great cost of living. Seoul, South Korea's megacity capital of more than 25 million has a cost of living comparable to Helsinki or Boston. HongKong, along with the capital of the Republic of China, Taipei are also amongst the most expensive cities of Asia.

The very expensive destinations like Singapore, Hong Kong and Tokyo, are not representative of destinations throughout the continent. There are still some great travel bargains to be found in Asia, including popular budget travel destinations like Bangkok, widely regarded as the epicentre of the backpacking culture in Southeast Asia. In addition, there are many different ways to travel this continent. You can go to a five-star restaurant, for instance, but then take in some free street art or get the best food experiences on the street and in small, cheap, locally run family restaurants, a mix-and-match approach that can stretch your budget. Hostels with dorm beds are not nearly as popular in Asia as they are in Europe or Australia, and part of the reason is how cheap the normal hotel rooms tend to be. In India, Pakistan, Nepal and Sri Lanka, a single meal can cost you less than USD$1. A half-day, long-distance bus trip costs just a couple of U.S. dollars more. In the Philippines, a hotel room outside Manila will cost you about USD$30 per night and a full-blown meal in an ordinary street-side stall runs about USD$2. Vietnam and especially Hanoi with its unique combination of French colonial and Asian post-communism will reward you with a fascinating culture, and low prices. 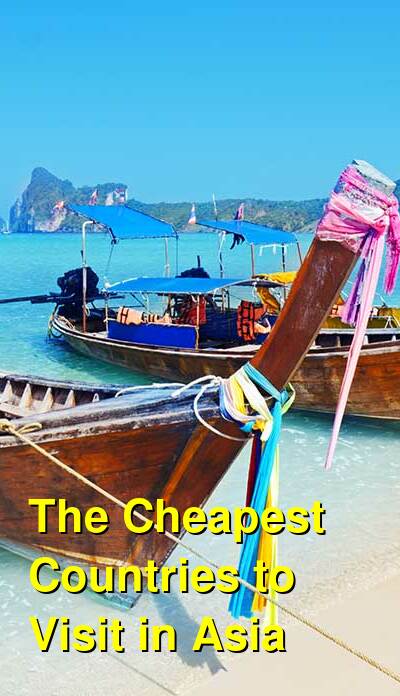