What are the cheapest cities to visit in the Middle East?

The following travel cost rankings for cities in the Middle East are calculated based on the travel budgets of real travelers. Also referred to as a Travel Cost Index, or a Backpacker Index, the cities below are in order from least to most expensive by their average daily travel price, per person, per day

What are the cheapest cities to visit in the Middle East?

The most affordable cities for travel in the Middle East are currently Ephesus (Turkey), Cappadocia (Turkey), Fethiye (Turkey), and Izmir (Turkey).

Affordable Travel in the Middle East

The Middle East is one of the most exotic regions in this world. A region that serves as a melting pot for many unique cultures, as well as a gate into the richest history in the world. This region has stood as a witness for numerous historic events that shaped all of our lives. And when it comes to ancient sites, it's as if you go on a journey back in time. The Empires of Alexander the Great, Persia, and Rome have all left their marks on the region. The Persians, Egyptians, Ottomans, and many other ruling groups were fond of creating monuments to celebrate their greatness, and quite a number can still be seen today. Some of the world's most prominent religions also came out of the Middle East. Christianity, Islam, and Judaism have many important sites throughout the region. The Middle Eastern countries will open your eyes to a side of the world you might never knew existed. People in the Middle East region are very warm and welcoming by nature and the exoticness of the culture there will leave you in awe. The traditions, the norms, the customs, etc; every aspect will intrigue you to explore more and tempt you to stay longer. The Middle East also has a rich variety of local cuisine for meat-eaters and vegetarians alike, and travelers won't find the cost of travel to weigh as heavily on their bank accounts as they would in Europe. Costs in the Middle East can vary wildly depending on which countries you visit. Here's a good rule to follow: the smaller the country, the more expensive it will be. Obviously, there are few exceptions. Hostels can be hard to find in some parts of the region, but where they're lacking you can often find very cheap budget hotels. Hostels are usually in the range of $7-$15/night, while a budget hotel room will be closer to $20-$30/night. Of course, these prices go up quickly in places like Dubai and Qatar. If you're content eating local cuisine, you'll have no trouble finding falafel, kebab, and other meals for under $2 in places like Iran or Egypt. As long as you stay away from tourist areas and Western cuisine, you should have no problem keeping food costs low. The cheaper countries in the Middle East can be done for $20-25/day by a frugal traveller, but a more comfortable range is $30-35/day, which will go up if visiting Israel, the United Arab Emirates, and other highly developed countries.

Cost of travel around the Middle East can vary greatly depending on country and activity. While there are some cities like Cairo, Egypt that can be as cheap as $19 USD per day, Dubai in the UAE can be over $200. Tourism has dropped due to bad press in former tourist hotspots like Turkey, causing prices to drop there as well. Oman is considerably more expensive but it is also known as one of the cleanest and safest countries in the Middle East. Much of Tel Aviv is very European, so it makes sense that this seaside resort town lines up in price with a typical European party city. Visiting Jerusalem or other popular destinations nearby will usually cost less per day, so Israel shouldn't be too problematic for most budget travelers and backpackers. Alcohol has become quite expensive due to recent tax increases, so this is yet another place to consider being a teetotaler. Beirut is much cheaper than Tel Aviv, so it's a good choice to spend a bit of time in without breaking the bank 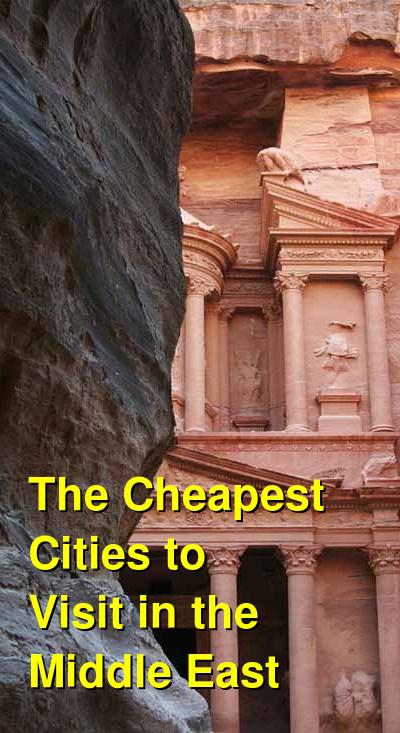