How much does it cost to travel to Bremen?

How much money will you need for your trip to Bremen? You should plan to spend around €62 ($75) per day on your vacation in Bremen, which is the average daily price based on the expenses of other visitors. Past travelers have spent, on average, €16 ($20) on meals for one day and €17 ($20) on local transportation. Also, the average hotel price in Bremen for a couple is €68 ($83). So, a trip to Bremen for two people for one week costs on average €870 ($1,055). All of these average travel prices have been collected from other travelers to help you plan your own travel budget.

A vacation to Bremen for one week usually costs around €435 for one person. So, a trip to Bremen for two people costs around €870 for one week. A trip for two weeks for two people costs €1,739 in Bremen. If you're traveling as a family of three or four people, the price person often goes down because kid's tickets are cheaper and hotel rooms can be shared. If you travel slower over a longer period of time then your daily budget will also go down. Two people traveling together for one month in Bremen can often have a lower daily budget per person than one person traveling alone for one week.


How expensive is Bremen? How much money do I need for Bremen?

How much does a trip to Bremen cost? Is Bremen expensive? The average Bremen trip cost is broken down by category here. All of these Bremen prices are calculated from the budgets of real travelers.

Find a hostel, guesthouse, or B&B in Bremen

What did other people spend on Food in Bremen?

Typical prices for Food in Bremen are listed below. These actual costs are from real travelers and can give you an idea of the prices in Bremen, but your costs will vary based on your travel style.

How much does it cost to go to Bremen? Naturally, it depends on the dates. We recommend SkyScanner because they can find the best deals across all airlines.

The price of renting a car in Bremen will depends on dates, the type of car, the location, and your age. We recommend SkyScanner because they can find the best deals across all car rental companies.

Tips and Handouts Budget in Bremen

What did other people spend on Water in Bremen?

Typical prices for Water in Bremen are listed below. These actual costs are from real travelers and can give you an idea of the prices in Bremen, but your costs will vary based on your travel style.

Bremen On a Budget

Bremen, Germany
Located in northern Germany, Bremen stretches along the River Weser. It has a population of over half a million and was once a member of the medieval Hanseatic League. It is a long and narrow city that runs along both sides of the river. It's about ten kilometers long, but is rarely more than two kilometers wide. With sites such as the Cathedral of St. Peter and Rathaus (the town hall), Bremen has a very historical atmosphere. The city itself dates back 1200 years. The sights are concentrated around the city's old town, Altmarkt and the main square is home to the Roland statue among other old and famous architectural gems. While visiting Bremen, try some of the city's famous candy, Kluten, and wash it down with some Beck's beer, which is also local to Bremen.

Bremen has a moderate oceanic climate because it is not far from the North Sea. There are occasional heat waves in the summer, or long periods of cold weather in the winter. In general the temperatures remain relatively mild though. Winters can be cloudy and gloomy and sunshine is rare. Rain falls evenly throughout the year but snowfall varies significantly from year to year. June, July and August are the city's warmest months and the coldest time is between December and February.

Sites around town that are of interest include the Cathedral of Saint Peter, Roland, a statue in the main square, Die Bremer Stadtmusikanten, and the lovely park of Am Wall. Also make sure you wander through Schnoor which is an area with many twisted streets that are lined with quaint shops. Also take a stroll down the art nouveau street, Bottcherstrasse. In addition to its fascinating character, the street has many shops and museums you can wander through.

Neighborhoods in downtown Bremen include Viertel, Neustadt, Findorff, and Schwachhausen. In Bremen-Nord the neighborhoods include Vegesack, St. Magnus, and Schonebeck.

Many people simply enjoy walking around town and taking in the atmosphere. There are also a handful of interesting activities you can enjoy. If you like football, try to catch a match of Werder Bremen. You can also visit Universum Bremen where there's a hands on science center. Also try to visit Burgerpark, which is located right in the middle of the city. You can sip a drink at Emma Cafe or rent a boat for the afternoon.

Popular festivals in town include Eiswette in January, Carnival in February, the Easter Market in April, The Vision Parade and Breminale Art Festival in June, the International Bremen Summer in August, Freimarkt in October and the Christmas Market in December.

If you're looking for a restaurant or cafe, head to the Schlachte area by the Weser River. Another popular option is Viertel south of Kunsthalle. In either area you're likely to find plenty of local specialties such as Labskaus, a meal that includes mashed potatoes, corned beef, onions, fried egg and beetroot or chick ragout. The region is popular for cabbage, which you're likely to find incorporated into many meals. Another popular option is fish, which can be found in most restaurants around town.

Bremen is also where the world known Beck's Beer is brewed. There are guided tours of the brewery that are available in both English and German. These tours must be booked in advance. If you're interested in wine, try the Ratskeller, which is a wine cellar and restaurant with an excellent collection of wines. The Schuttinger Brewery House is a great place to try different beers and pretzels. It's located next to Bottcherstrasse.

The parts of Bremen that are of greatest interest to travelers are easily reached by walking. If you're staying in the old city and its surrounding neighborhoods then walking is the best way to explore. If you're hoping to go further out you can take a taxi or a bus, and there is also a decent rental bike program.

The city offers a car sharing program but you must belong to the Cambio network in either Belgium or Germany. There is also a good public transit system that includes streetcars and buses. It's easy to pick up a taxi almost anywhere as well. The two main companies around town are Taxi-Roland and Taxi-Ruf. Prices are comparable. Bikes are available for rent at the train station and through several bike shops around town. Bremen is a very bike friendly city and the former mayor was an avid cyclist. 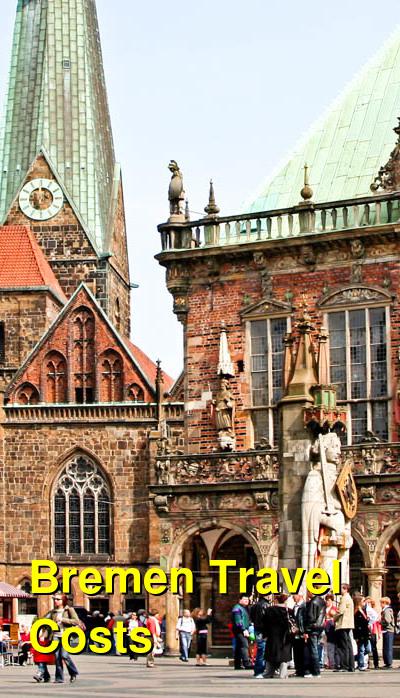