How much does it cost to travel to Frankfurt?

How much money will you need for your trip to Frankfurt? You should plan to spend around €59 ($69) per day on your vacation in Frankfurt, which is the average daily price based on the expenses of other visitors. Past travelers have spent, on average, €9.80 ($12) on meals for one day and €32 ($37) on local transportation. Also, the average hotel price in Frankfurt for a couple is €56 ($66). So, a trip to Frankfurt for two people for one week costs on average €822 ($972). All of these average travel prices have been collected from other travelers to help you plan your own travel budget.

A vacation to Frankfurt for one week usually costs around €411 for one person. So, a trip to Frankfurt for two people costs around €822 for one week. A trip for two weeks for two people costs €1,644 in Frankfurt. If you're traveling as a family of three or four people, the price person often goes down because kid's tickets are cheaper and hotel rooms can be shared. If you travel slower over a longer period of time then your daily budget will also go down. Two people traveling together for one month in Frankfurt can often have a lower daily budget per person than one person traveling alone for one week.


How expensive is Frankfurt? How much money do I need for Frankfurt?

How much does a trip to Frankfurt cost? Is Frankfurt expensive? The average Frankfurt trip cost is broken down by category here. All of these Frankfurt prices are calculated from the budgets of real travelers.

How much do vacation rentals cost in Frankfurt? Prices vary by location, date, size of the place, and the level of luxury. See below for options.

What did other people spend on Food in Frankfurt?

Typical prices for Food in Frankfurt are listed below. These actual costs are from real travelers and can give you an idea of the prices in Frankfurt, but your costs will vary based on your travel style.

How much does it cost to go to Frankfurt? Naturally, it depends on the dates. We recommend SkyScanner because they can find the best deals across all airlines.

The price of renting a car in Frankfurt will depends on dates, the type of car, the location, and your age. We recommend SkyScanner because they can find the best deals across all car rental companies.

What did other people spend on Transportation in Frankfurt?

Typical prices for Transportation in Frankfurt are listed below. These actual costs are from real travelers and can give you an idea of the prices in Frankfurt, but your costs will vary based on your travel style.

What did other people spend on Alcohol in Frankfurt?

Typical prices for Alcohol in Frankfurt are listed below. These actual costs are from real travelers and can give you an idea of the prices in Frankfurt, but your costs will vary based on your travel style.

Frankfurt On a Budget

Christmas in Frankfurt, Germany
Frankfurt is the financial and business hub of Germany. It houses the European Central Bank and the German Stock Exchange, and often plays host to trade shows and business fairs. It has the country's most modern skyline and the largest airport. It is also a transportation hub for Germany with many important train lines passing through. The city itself is situated on the River Main. Some of the most important sights are along the river near Romer Square and include museums and monuments. This area pulls in millions of tourists every year. Although many sights are clustered in this area, it's important to head into more off the beaten path areas that can be enjoyable to explore. These areas offer glimpses into daily life in Frankfurt.

Perhaps the best time of year to visit Frankfurt is during the late spring and early autumn. Summers are warm and sunny with temperatures around 25 degrees Celsius, but the occasional hot day, where thermometers reach over 35 degrees Celsius, is not uncommon. There are also occasional rainstorms. The winters are cold and rainy with temperatures dropping below freezing, although snow is actually quite rare.

Top sights in Frankfurt include Romerberg, or the old city center, Dom, the city's main cathedral, and Eiserner Steg, a great pedestrian bridge that will take you to Sachsenhausen. Also be sure and check out some of the city's museums such as the German Architecture Museum, and the Museum of Regional Historic Art and Culture. For the best views of the Frankfurt skyline, head over to the eastern bridges in the city.

Frankfurt has a very walkable city center. The heart of the city is between Konstablerwache, Hauptwache and the Main river. This area is referred to as the "City" and it has many shopping areas and many of the historical sights. Sachsenhausen is in the southern part of the city. It is also a tourist and party hub in the city. There are many bars and clubs that get crowded on the weekends. To the west of the city center is the banking district. This is where you'll find the country's biggest banks and many of the skyscrapers. Westend is the most expensive living area in the city and Bockenheim is where you'll find many student bars and cafes. Nordend and Bornheim are quiet and more residential areas and Ostend has a strong Jewish community. Bahnhofsviertel is where you'll find the main train station as well as the city's red light district.

There is no shortage of restaurants in Frankfurt. Fressgass, which translates into "munching alley", is one popular neighborhood for food. The street with the most cafes and restaurants is Grosse Bockenheimer Strasse. Many people head here for a meal after a long day of shopping. Every year the neighborhood hosts the Fressgass Fest, which has many food stands, cheap beer, and live music. If you're in town during this time, it's worth checking out.

If you're looking for budget places to eat, your best options may be pizzerias, kebab places, or Chinese restaurants. These options are usually cheap and filling. Curry-wurst is also a go-to meal for those on a budget. It is made with sliced beef sausage that is covered with ketchup and curry spices.

As in other German cities, public transportation is the way to go in Frankfurt. The Underground, the tram, and buses offer the most efficient and affordable way to explore the city. If you're headed out to the suburbs, its fairly easy to hop on the S-Bahn. Taxis are also abundant and reasonably priced. Do make sure the driver takes the most direct route as fairs can quickly rise in price with added distance.

It is best to avoid driving yourself in the city. The touristy areas in particular can be difficult for parking and towing is strictly enforced. If you do drive, try to find a parking garage for the whole day. The rates are the best and you can avoid the hassle of moving your car.

Cycling is relatively easy in Frankfurt. There are many bike lanes and some rental companies where you can rent a bike, although their locations are often inconvenient. Deutsche Bahn also rents bikes. They are red and white and marked with the letters "DB". They are available throughout the city between the months of April and December. 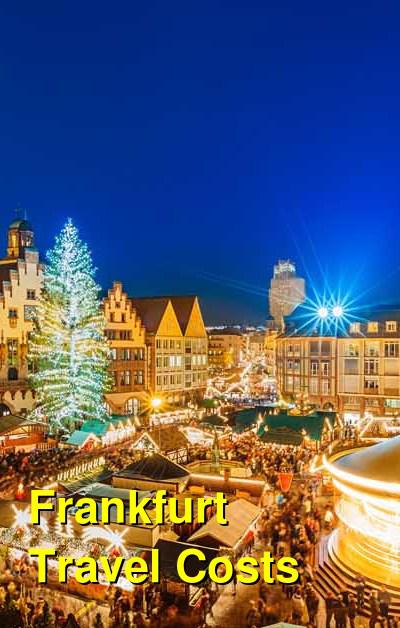