How much does it cost to travel to Hannover?

How much money will you need for your trip to Hannover? You should plan to spend around €422 ($505) per day on your vacation in Hannover, which is the average daily price based on the expenses of other visitors. Past travelers have spent, on average, €77 ($92) on meals for one day and €45 ($54) on local transportation. Also, the average hotel price in Hannover for a couple is €645 ($772). So, a trip to Hannover for two people for one week costs on average €5,903 ($7,072). All of these average travel prices have been collected from other travelers to help you plan your own travel budget.

A vacation to Hannover for one week usually costs around €2,951 for one person. So, a trip to Hannover for two people costs around €5,903 for one week. A trip for two weeks for two people costs €11,805 in Hannover. If you're traveling as a family of three or four people, the price person often goes down because kid's tickets are cheaper and hotel rooms can be shared. If you travel slower over a longer period of time then your daily budget will also go down. Two people traveling together for one month in Hannover can often have a lower daily budget per person than one person traveling alone for one week.


How expensive is Hannover? How much money do I need for Hannover?

How much does a trip to Hannover cost? Is Hannover expensive? The average Hannover trip cost is broken down by category here. All of these Hannover prices are calculated from the budgets of real travelers.

How much do vacation rentals cost in Hannover? Prices vary by location, date, size of the place, and the level of luxury. See below for options.

How much does it cost to go to Hannover? Naturally, it depends on the dates. We recommend SkyScanner because they can find the best deals across all airlines.

The price of renting a car in Hannover will depends on dates, the type of car, the location, and your age. We recommend SkyScanner because they can find the best deals across all car rental companies.

Hannover On a Budget

Hanover
Hannover is the capital of Lower Saxony (or Niedersachsen) in northern Germany. It is fairly modern with very little remnants architecturally pre-World War II. Today, it is best known for a handful of landmarks and the largest annual tech expo in the world.

As far as sights go, one of Hannover's most outstanding is the New Town Hall. A grand and ornate building with city views from its domes, the Town Hall is also the home of 4 different scale models of Hannover throughout the ages-1689, 1939, 1945, and 2000. The Gardens of Herrenhausen are another popular attraction, dating back to the 17th century in imitation of the Versailles Garden in France. It is also home to one of Europe's tallest fountains as well as an open-air theatre. In addition to these landmarks, Hanover has an assortment of other important buildings like the red-brick Gothic Market Church and the Leibniz University of Hanover. Most of these structures, however, have been rebuilt due to destruction during World War II.

For those interested in art, culture, and history, the museums of Hanover are another attraction worth visiting. Landesmuseum, for example, has a collection of exhibits that range from prehistoric Saxony to artifacts of later empires, as well as a Japanese tea room. The Historical Museum traces regional history up to the present day, the Sprengel Museum and Wilhelm-Busch Museum both feature a variety of modern art, and the Kestner-Museum follows civilizations of ancient Egypt, Rome, and Greece from the Middle Ages to the present time.

Overall, Hannover is not a traditional old-world European city, as it was hit very hard during World War II. A few residential neighborhoods have remnants of late nineteenth-century architecture, such as Oststadt, List, or Linden. You will also find a few traditional German timber-framed houses on Kramerstrasse, however, most of the city has a fairly modern look. At the heart of Hannover lies Kröpcke-a large pedestrian square with a notable green clock often used as a meeting spot. The clock itself is a replica of an 1885 clock that was removed after World War II damages. Today, the square bustles with visitors and locals alike. It is home to the main station of Hanover Stadtbahn tramway network making it a hub for transport as well. Other attractions here include the Hanover Opera House (or Opernhaus) venue for operas, ballets, and classical music, as well as plenty of options for dining and shopping.

Beyond exploring the city's architecture, museums, and remnants of the past, Hannover also has some opportunities to see wildlife. Both the Hannover Aquarium and the Hannover Zoo offer access to animals from all over the world. The Aquarium houses a number of fish and a rainforest habitat, while the Zoo features six different zoo worlds with animals of various ecosystems. At the center of Hanover there is also an artificial lake known as Maschsee, which serves as a popular recreation area and site for summer festivals.

For a more cultured visit, tourist can catch a show at the Hannover Opera or enjoy any variety of entertainment at N.D.R. Symphoniker, which serves as a venue for poetry readings, jazz, rock concerts, chamber orchestras, and more. Hanover also hosts a number of festivals throughout the year, the most famous of which is the CeBIT expo-the largest computer-related exhibition in the world. The event is held annually for several days in March.

As a large city, Hannover is host to a variety of restaurants serving international cuisine as well as plenty of cafes and bakeries. For an authentic dining experience, there are also opportunities to try traditional German dishes, which are hearty and rustic and usually based in meat and potatoes. Some typical meat dishes include things like Sauerbraten, which involved marinating meat in vinegar or wine vinegar for several days, or Bratwurst sausages, which are eaten more as a fast food. Side dishes are, for the most part, potato-based, including things like boiled, mashed, or pan-roasted potatoes, as well as french fries, which are called pommes frites or fritten in Germany. Thick pastas are also used on occasion. For dessert, a variety of cakes, tarts, and pastries are served. Beer is also widely popular with a number of local pubs and breweries.

The city is served mainly by Hannover Airport, located on the northern outskirts of the city about 13 kilometers from the center in Langenhagen, Germany. From the airport, there is a train that runs twice every hour (the S-Bahn) to the city's central station (Hauptbahnhof).

Hannover is also well-connected to other parts of Germany and Europe by train via Deutsche Bahn. For travel within Germany, the high-speed Inter City Express Trains are the fastest with service between Hannover and cities including Frankfurt, Hamburg, Stuttgart, Munich, Cologne, and Berlin. 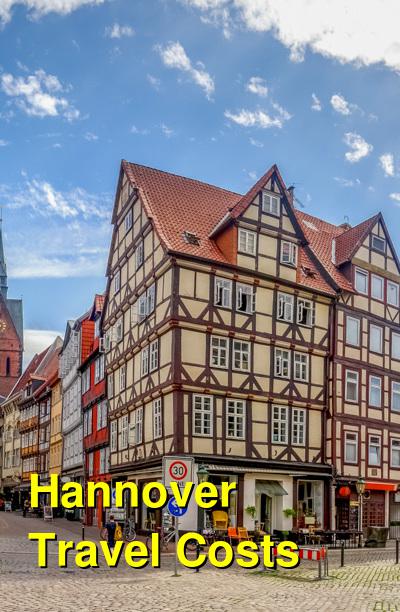