How much does it cost to travel to Kiel?

How much money will you need for your trip to Kiel? You should plan to spend around €110 ($130) per day on your vacation in Kiel, which is the average daily price based on the expenses of other visitors. Past travelers have spent, on average, €31 ($36) on meals for one day and €43 ($51) on local transportation. Also, the average hotel price in Kiel for a couple is €108 ($128). So, a trip to Kiel for two people for one week costs on average €1,543 ($1,825). All of these average travel prices have been collected from other travelers to help you plan your own travel budget.

A vacation to Kiel for one week usually costs around €772 for one person. So, a trip to Kiel for two people costs around €1,543 for one week. A trip for two weeks for two people costs €3,086 in Kiel. If you're traveling as a family of three or four people, the price person often goes down because kid's tickets are cheaper and hotel rooms can be shared. If you travel slower over a longer period of time then your daily budget will also go down. Two people traveling together for one month in Kiel can often have a lower daily budget per person than one person traveling alone for one week.


How expensive is Kiel? How much money do I need for Kiel?

How much does a trip to Kiel cost? Is Kiel expensive? The average Kiel trip cost is broken down by category here. All of these Kiel prices are calculated from the budgets of real travelers.

How much do vacation rentals cost in Kiel? Prices vary by location, date, size of the place, and the level of luxury. See below for options.

How much does it cost to go to Kiel? Naturally, it depends on the dates. We recommend SkyScanner because they can find the best deals across all airlines.

The price of renting a car in Kiel will depends on dates, the type of car, the location, and your age. We recommend SkyScanner because they can find the best deals across all car rental companies.

Kiel On a Budget

Kiel, Germany
Kiel is a port city on Germany's Baltic Sea coast. Much of the city center it was obliterated during WWII by bombing raids on its U-boat pens. In the old town, the rebuilt, medieval St. Nikolai Church hosts classical concerts and Holstenstrasse and Danische Strasse are streets lined with shops. The city also has several indoor malls linked by pedestrian bridges. Along the Kiel Fjord, the Maritime Museum displays model ships and nautical instruments in a former fish auction hall. Nearby, cruise ships dock at the Ostseekai Terminal in Germania Harbor. This grand harbor in Kiel continues on as it has for centuries and should be the focus of your visit. Huge ferries transport millions of passengers to and from Scandinavia, while summer sees locals strolling the long waterfront promenade.

Kiel's shopping district is a major attraction. Kiel's Holstenstrasse (Holsten Street) is one of the longest shopping streets in Germany. The Rathaus (town hall), which was built in 1911, has an operating elevator and the design of its tower was based on one in Venice. The square in front of it is bordered by a lake and the Opera House. There are also a number of lakes and parks in the city center. There are also two botanical gardens, the Old Botanical Garden and New Botanical Garden.

As Kiel is situated near the sea, the beaches to the north of Kiel such as Strande, Kiel-Schilksee, Moltenort and Laboe are also popular places to visit in spring and summer.

The oldest building in the city is the 13th century Nikolaikirche (St Nicholas' Church), which has a sculpture by Ernst Barlach in front of it called Geistkampfer.

Center: (Sudfriedhof, Altstadt, Vorstadt, Exerzierplatz, Damperhof, Ravensberg, Dusternbrook and Brunswik)
The Kiel Center is definitely the most attractive area. Many bars, restaurants and welcoming pubs offer ways to switch off, as well as the Schrevenpark and the extensive forest area near the Hindenburgufer. There are also the Holtenauer street and the city center with many shops.

Northwest: (Schilksee, Friedrichsort, Pries, and Holtenau)
The Northwest Kiel is shaped by many ports, but also by large green areas and beaches. One can reach the inner city relatively fast, but it feels like being in a rural area. It's location on the water makes it ideal for everyone who comes to seek a little rest and relaxation.North western Kiel is well served by public transport and usually you do not need more than 15 minutes to reach the inner city.

West: (Wik, Projensdorf, Suchsdorf, Hasseldieksdamm, Mettenhof, and Russee)
Much commercial space, a lot of companies and also very nice apartments, flats, houses can be found here, as well as the University of Kiel, which is situated directly near the Westring. Western Kiel is close to downtown and not far from the motorway.

Kiel Week, more properly known in English as Kiel Regatta, is the largest sailing event in the world and takes place every year in the last full week of June. Many thousands of boats and ships of all kinds and eras take part in the parade. Kiel Week is also a festival, Volksfest and fair as well as a maritime event. There are a number of yachting and sailing clubs in picturesque settings.

Kiel also features a number of museums, including zoological, geological, historical, fine art, industrial, and military museums. Notable is the City and Maritime Museum. In addition to preserving architecture from the 16th century and historic rooms with painted stucco ceilings. The bulk of the Kunsthalle Kiel art museum's collection is from the 19th and 20th centuries and there are some influential German artists here, like the Romantic Carl Spitzweg and Impressionists like Lovis Corinth, Max Slevogt and Max Liebermann. The building for the Zoological Museum Of Kiel University was designed in the 1870s by one of the eminent architects of the day, Martin Gropius, great uncle of Bauhaus founder Walter Gropius. The museum's collections are much older, and were first gathered in the 1600s. An exhibit you won't soon forget is in the main hall, where there are 13 whale skeletons and massive blue and sperm whales are suspended from the ceiling.

On a beach on the eastern lip of the fjord at Laboe is a wartime U-boat that has been turned into a technical museum. U-995 was built by Blohm & Voss in Hamburg in 1943. It opened as a museum in 1972. Little has changed inside, and if you don't mind cramped spaces you can poke around the engine room, control station, bunks and torpedo tubes.

Kiel has some great options for foodies. The best ever German/Turkish Doner kebabs can be found at Garips Imbiss, located on the corner of the Metzstrasse and Worthstrasse. There are convenient food courts in Kieler Hauptbahnhof and the shopping mall across from the train station. For something different, try the "Kartoffel Keller" (Potato cellar), where everything has potato as the theme - the potato pizza is very good. Other good cafes and pubs can be found in the old city center. A nice breakfast buffet is available on the weekend in Cafe Louf next to the water near the "Reventloubrucke".

Kiel is a significant port for passenger and cargo shipping from Germany to Scandinavia, the Baltic States and Russia. Passenger ferries operate to and from Gothenburg in Sweden, Oslo in Norway, and Klaipeda in Lithuania. The nearest international airport is Hamburg Airport, which is situated approximately 56 miles to the south of Kiel. There is a shuttle bus service operating between Hamburg Airport and Kiel central railway station. Kiel also has 8 regional railway stations within the city proper, which are connected with each other, the main railway station Kiel Hbf, and other stations by regional trains. Public transport is very well developed here, and here Kiel is a bicycle town: You can reach everything within short time by bike. 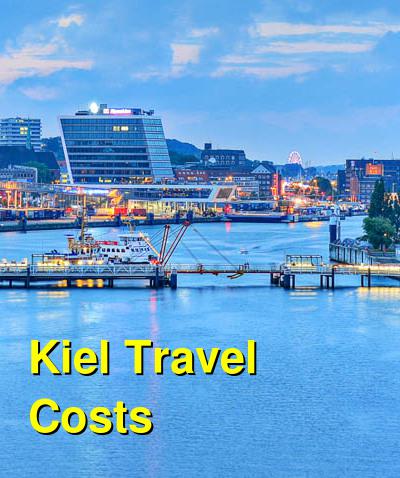