How much does it cost to travel to Potsdam?

How much money will you need for your trip to Potsdam? You should plan to spend around €89 ($94) per day on your vacation in Potsdam, which is the average daily price based on the expenses of other visitors. Past travelers have spent, on average, €25 ($26) on meals for one day and €22 ($24) on local transportation. Also, the average hotel price in Potsdam for a couple is €96 ($101). So, a trip to Potsdam for two people for one week costs on average €1,246 ($1,313). All of these average travel prices have been collected from other travelers to help you plan your own travel budget.

A vacation to Potsdam for one week usually costs around €623 for one person. So, a trip to Potsdam for two people costs around €1,246 for one week. A trip for two weeks for two people costs €2,491 in Potsdam. If you're traveling as a family of three or four people, the price person often goes down because kid's tickets are cheaper and hotel rooms can be shared. If you travel slower over a longer period of time then your daily budget will also go down. Two people traveling together for one month in Potsdam can often have a lower daily budget per person than one person traveling alone for one week.


How expensive is Potsdam? How much money do I need for Potsdam?

How much does a trip to Potsdam cost? Is Potsdam expensive? The average Potsdam trip cost is broken down by category here. All of these Potsdam prices are calculated from the budgets of real travelers.

How much do vacation rentals cost in Potsdam? Prices vary by location, date, size of the place, and the level of luxury. See below for options.

How much does it cost to go to Potsdam? Naturally, it depends on the dates. We recommend Kayak because they can find the best deals across all airlines.

The price of renting a car in Potsdam will depends on dates, the type of car, the location, and your age. We recommend Kayak because they can find the best deals across all car rental companies.

Potsdam On a Budget 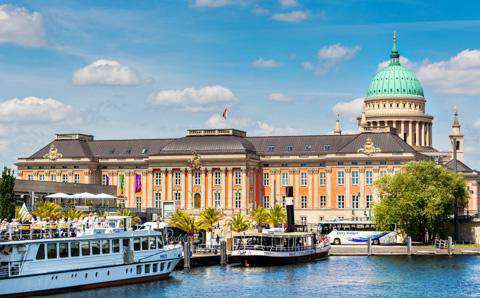 Potsdam
Before you lays a treasure chest of historic beauties. From the glimmering Renaissance Orangery Palace that overlooks its sumptuous fountains to the neoclassical Charlottenhof Castle that is surrounded by lush England gardens, you find yourself in none other than Potsdam, Germany. The capital and largest city of the German federal state of Brandenburg, Potsdam borders the German capital Berlin and is located right on the bay of the River Havel. A home for Prussian kings until 1918 and a brainchild of the Enlightenment, Potsdam was constructed thoughtfully and carefully by its architects to create what many to believe as "a picturesque, pastoral dream" and a "balance between both nature and reason." From interconnected lakes to historic landmarks, Potsdam is a city that is bursting with life all year around. With its rich history, it was no wonder various parts of the city were named a World Heritage Site. With its landscape and cityscape rivaling in beauty, Potsdam is simply a breathtaking city that must be explored!

One of the many sights that draw tourists from across the globe is the well-known Sanssouci Park, which includes a collection of palaces and gardens. Built in the years 1745 and 1747 by architect Georg W. von Knobelsdorff, Sanssouci Palace is by far the most popular of the cluster of palaces found in the park. Erected for Frederick William IV, Frederick was later buried in the Sanssouci Palace during 1991, on the 205th anniversary of his death. With some 70 km of walkways, Sanssouci Park is the largest park in Brandenburg. It is estimated that over a million tourists visit this park per year. Beside Sanssouci Palace, the park also includes the Church of Peace, Orangery Palace, Charlottenhof Castle, Roman Baths, Chinese Teahouse, as well as many more simply amazing sights. Be sure to check out the park's website as opening and closing times for each exhibit vary widely. Watch the history of centuries past be resurrected before your very eyes at Sanssouci Park!

If you are looking to take a rendezvous from the hustle and bustle of the city, enjoy the peaceful serenity of being lakeside at Sacrower See. With a depth of more than 4 metres, Sacrower See boasts the best water quality of all lakes in and around Berlin, allowing for the lake's waters to be nearly transparent. Due to its paradise-like quality it attains, it is no wonder that Sacrower See attracts tourists from all over the world. Whether you are looking for a refreshing swim or a warm sunbath, Sacrower See will furnish your needs easily. The surrounding forest also allows you to enjoy some of Germany's wildlife, where there is also a smaller bathing area that allows you to sunbathe on the grass. Besides this, Sacrower See also provides food and drinks for its visitors with its Restaurant Landleben and beer garden that offers a perfect view of the lake and the bathing area. Order fresh, tasty dishes as short pasta with spicy tomato sauce and olives, classic bacon and cheese, Mediterranean barbecued vegetable with goose cheese and rucola, and young salad with fried chicken liver and cherries. Enjoy a breathtaking view as you take another savory bite at Sacrower See's Restaurant Landleben!

Getting around Potsdam can be done with its modern and overall excellent tram and bus systems (though it is relatively confusing to navigate around). As Potsdam is part of the VBB transportation network, you are able to jump on and off trams and buses at will. The city is divided into zones, with Zone A being the inner city, Zone B being the outer parts, and Zone C being the hinterland. Any ticket that states ABC or BC will therefore give you full access to explore Potsdam. The five main lines in Potsdam include SchlÃ¶sser-Linie, Krongut-Linie, Tropen-Linie, Filmstadt-Linie, and Cecilienhof-Linie. Besides buses and trams, services for taxis, car rentals, and bicycle rentals can be found throughout the city. Enjoy your stay in Potsdam!