How much does it cost to travel to Munich?

How much money will you need for your trip to Munich? You should plan to spend around €110 ($118) per day on your vacation in Munich, which is the average daily price based on the expenses of other visitors. Past travelers have spent, on average, €20 ($22) on meals for one day and €14 ($15) on local transportation. Also, the average hotel price in Munich for a couple is €134 ($144). So, a trip to Munich for two people for one week costs on average €1,533 ($1,657). All of these average travel prices have been collected from other travelers to help you plan your own travel budget.

A vacation to Munich for one week usually costs around €767 for one person. So, a trip to Munich for two people costs around €1,533 for one week. A trip for two weeks for two people costs €3,066 in Munich. If you're traveling as a family of three or four people, the price person often goes down because kid's tickets are cheaper and hotel rooms can be shared. If you travel slower over a longer period of time then your daily budget will also go down. Two people traveling together for one month in Munich can often have a lower daily budget per person than one person traveling alone for one week.


How expensive is Munich?

How much does a trip to Munich cost? Is Munich expensive? The average Munich trip cost is broken down by category here. All of these Munich prices are calculated from the budgets of real travelers.

While meal prices in Munich can vary, the average cost of food in Munich is €20 per day. Based on the spending habits of previous travelers, when dining out an average meal in Munich should cost around €8 per person. Breakfast prices are usually a little cheaper than lunch or dinner. The price of food in sit-down restaurants in Munich is often higher than fast food prices or street food prices.

The cost of a taxi ride in Munich is significantly more than public transportation. On average, past travelers have spent €14 per person, per day, on local transportation in Munich.

How much does it cost to go to Munich? Naturally, it depends on the dates. We recommend SkyScanner because they can find the best deals across all of the airlines.


How much money do I need for Munich?

How much do tours to Munich cost? Multi-day tours can often be an effecient way to see the highlights of a country or region.

Find a hostel, guesthouse, or B&B in Munich

Munich On a Budget 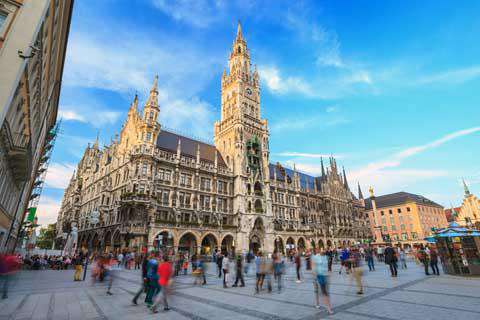 Marienplatz Town Hall, Munich, Germany
Munich is the capital city of Bavaria and a top travel destination within Germany. It has stunning architecture and a cultural scene that rivals Berlin. It has some of the country's top museums, festivals, and concerts. Munich is most famous for its Oktoberfest, which is easily the busiest time of year in the city. The architecture is what surprises most travelers. It's quite impressive and truly adds to the character of the city. Although much of Munich was destroyed during World War II, the city has successfully rebuilt most of the buildings in their previous style. Much of the city remains as it was in the 1800s. There are two major research universities in Munich, helping to make it a center for engineering, business, and the sciences.

Munich's climate is influenced by the nearby Alps. It gets a significant amount of rain, which can come on suddenly and violently. Winters can be cold, but this is when you see the least amount of precipitation. Snow is common for at least a few weeks. Summers are warm and comfortable and the temperature usually hovers around 23 degrees Celsius.

Munich is a historic, large city with something for everyone. There are four grand avenues that are lined with impressive architecture. These are Briennerstrabe, Ludwigstrabe, Maximilianstrabe and Prinzregentenstrabe. Other notable sights include Schloss Nymphenburg, Residenze, Schloss Schleibheim, Schloss Dachau, Frauenkirche, Neues Rathaus, among many others. Munich also has many museums, parks and art galleries worth checking out.

There are several districts worth visiting in Munich, including the city center with its pedestrian shopping area and much of the impressive architecture. Also take some time to explore the university area, Schwabing, with its charming neighborhood and many restaurants and cafes. It's also worth heading over to the Olympic area, which is the site of the 1972 Olympics. Maxvorstadt is a high end academic and arts district and Au-Haidhausen is where you should go if you want to go clubbing.

Oktoberfest is the obvious go-to event in Munich, but the city also hosts many other interesting festivals. These include Maibaumaufstellen on the first of May and Tollwood during the summer and winter. During Maibaumaufstellen many parts of Bavaria are filled with people wearing Lederhosn and Dirndln. They bring long poles and gather in the central square where there is an oompah band playing. You can buy food and drinks and take in this traditional event. Tollwood is an alternative festival that is held for three weeks in Olympic Park during the summer and Theresienwiese during the winter. Don't be surprised, but Munich in winter is fantastic. It's a great place to enjoy some ethnic food, see local crafts and take in some performances.

Munich has some of the best Bavarian cuisine you can find. In particular you'll want to try Weibwurst which is a breakfast sausage served with a Weissbier, or white beer. Another cheap and delicious option is the leberkassemmeln, or roll that is filled with veal, pork, and spices. Also check out some of the great international restaurants in Munich which can range in price from budget to expensive.

Even if you're not in town for Oktoberfest, you definitely must check out a beer garden. They usually are situated under the shade of a tree with casual tables and folding chairs. They are most often self service, and most let you bring your own food. Some also offer food for sell. Snacks available often include pretzels and cured fish. It's a great way to pass an afternoon with a group of friends.

Munich Car Rental Prices
Compare prices across all major rental companies:
Public transportation is the obvious way to get around Munich, as it's easy, convenient, and cheap in cost. The system consists of the Tram, S-Bahn, and U-Bahn, as well as buses. All modes of transportation are on a one ticket system, called MVV. It's possible to purchase tickets as individual, group, day or week tickets. Taxis are easy to find as well and they have the same beige color with a yellow and black sign, similar to that found elsewhere in Germany. Fairs are reasonable, but not cheap.

Munich also offers over 200 kilometers of bike trails and this is a great way to explore the city. There are guided tours available, but going it alone is a fun too. It's easy to find bike rentals and maps at Hauptbahnof as well as throughout the city. Call-A-Bike is a great system that is run by Deutsche Bahn. Just call the number on the bike from your cell phone and you can register the bike on the spot. This is most economical if you're only taking a single trip, otherwise you should rent a bike for the entire day.

Train and Bus Prices
The best prices for buses and trains in Germany can be found on Omio (formerly GoEuro). They let you search across all train, bus, and plane routes throughout Europe.