How much does it cost to travel to Cologne?

How much money will you need for your trip to Cologne? You should plan to spend around €126 ($133) per day on your vacation in Cologne, which is the average daily price based on the expenses of other visitors. Past travelers have spent, on average, €40 ($42) on meals for one day and €15 ($16) on local transportation. Also, the average hotel price in Cologne for a couple is €140 ($148). So, a trip to Cologne for two people for one week costs on average €1,766 ($1,865). All of these average travel prices have been collected from other travelers to help you plan your own travel budget.

A vacation to Cologne for one week usually costs around €883 for one person. So, a trip to Cologne for two people costs around €1,766 for one week. A trip for two weeks for two people costs €3,531 in Cologne. If you're traveling as a family of three or four people, the price person often goes down because kid's tickets are cheaper and hotel rooms can be shared. If you travel slower over a longer period of time then your daily budget will also go down. Two people traveling together for one month in Cologne can often have a lower daily budget per person than one person traveling alone for one week.


How expensive is Cologne? How much money do I need for Cologne?

How much does a trip to Cologne cost? Is Cologne expensive? The average Cologne trip cost is broken down by category here. All of these Cologne prices are calculated from the budgets of real travelers.

How much do vacation rentals cost in Cologne? Prices vary by location, date, size of the place, and the level of luxury. See below for options.

How much does it cost to go to Cologne? Naturally, it depends on the dates. We recommend Kayak because they can find the best deals across all airlines.

The price of renting a car in Cologne will depends on dates, the type of car, the location, and your age. We recommend Kayak because they can find the best deals across all car rental companies.

What did other people spend on Food in Cologne?

Typical prices for Food in Cologne are listed below. These actual costs are from real travelers and can give you an idea of the prices in Cologne, but your costs will vary based on your travel style.

Best Hostels for Solo Travellers, Couples, and Groups in CologneAffordable and Safe Hostels in Cologne, GermanyDusseldorfBonnBerlinHamburg

Cologne On a Budget 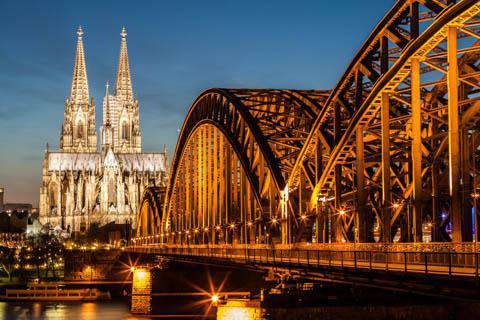 Hohenzollern Bridge and Cologne Cathedral, Cologne, Germany
Spanning the Rhine River in western Germany, the city of Cologne dates back 2,000 years, once existing as the largest city of the Holy Roman Empire in medieval times. Today, it is the region's cultural hub - a center of museums, galleries, and towering Gothic cathedrals.

The Cologne Cathedral, or Kolner Dom, is perhaps the most recognized landmark of the city. It towers above everything with over 500 stairs up to the south tower. In addition, the city has a dozen more Romanesque churches open to the public some of which include St. Kunibert with beautiful stained glass windows, St. Andreas with 14th century frescoes, St. Aposteln with controversial paintings from the 1990s, as well as St. Gereon, St. Ursula, and St. Pantaleon amongst others.

Other architectural sights worth seeing are the Die Kolner Synagoge; the Hohenzollern Bridge, also known as the Locking Bridge as it is covered in padlocks that couples have placed there to pledge their love; and also the Rheinauhafen (or harbor) where there is a great mix of old and new.

As with any city, there are a handful of parks to provide pleasant green space for visitors and locals alike. And then there are the museums and galleries-one of the world's best collections of museums and galleries for a city of its size. Some of these include world class museums of art and archaeology, two museums of ecclesiastical art, an ethnographic museum, a chocolate museum, and the German Sport Museum, as well as an abundance of Roman remains.

Cologne is full of traditional neighborhoods, or "Veedel", scattered throughout the city. One of the most notable is the bohemian Agnesviertel which features independent designers, bookshops, bars, and art galleries. Here you can spend the day sightseeing historical monuments, visit an exhibition, explore local markets, and wind down in a traditional pub or local cafe. Other "Veedel" include Ehrenfeld, Nippes, and the historical SÃ¼dstadt. Old Town with its signature Cologne Cathedral, cobblestone alleys, and historic town hall is perhaps one of the most picturesque parts of the city-a great place to explore all day and then kick back at a brewery to take in the scenery.

This is a city of rich history and thriving culture. Once you've experienced the landmarks, galleries, and museums, which should all be on your list of things to do in Cologne, you can delve into its ethos of today by enjoying the shopping, dining, and nightlife.

Germany is known for its festivals, and Cologne has a few like the Kolner Karneval - one of the biggest in the city. Occurring in February, this winter carnival holds an annual parade and accompanying festivities. There are also many Christmas Markets held throughout December, the most famous being the one close to the cathedral and the one at Neumarkt. Here you will find many local crafts, brews, and foods to warm you up in the cold winter weather.

Other attractions of Cologne include the zoo and aquarium, the Phantasialand amusement park, Kolner Seilbahn which provides cable car rides across the Rhine River, and Claudius Therme which features a series of indoor and outdoor pools and saunas. River cruises and city tours are also popular.

Being a large city the cuisine of Cologne is rich and diverse with anything from Middle Eastern, Asian, and Italian to the more traditional local foods of the region. Some of these include dutch gouda cheese on a rye roll called halver hahn, a dish called Himmel und Ã d mit FlÃ¶nz which consists of a fried blood sausage with mashed potatoes, apple sauce, and fried onions, as well as the famous Sauerbraten which consists of a link (beef or horsemeat) marinated in vinegar with raisins, usually served with red cabbage and a kloss (potato dumpling). Pig's legs (Schweinshaxe or HÃ¤mchen) are also popular as are potato pancakes (Rievekoochen or Reibekuchen) sometimes served with apple sauce or horseradish. Most traditional German dishes are hearty and rustic, usually found in local pubs throughout the city. Germany is also renowned for its brewing, and the typical Cologne beer is called "KÃ¶lsch." There are plenty of breweries and pubs throughout the city, serving kolsch and many other local varieties.

Cologne Bonn Airport is about 15 minutes by local train the city center. It is served by both international and domestic flights and is a base for the low cost airlines Germanwings and TUIfly.

DÃ¼sseldorf International Airport is about a 40 minute train ride to Cologne central station and offers many intercontinental connections.

By train, Cologne is served by two train stations: KÃ¶ln Hauptbahnhof and KÃ¶ln-Deutz. The city is linked with Amsterdam, Brussels, and Paris by Thalys and Inter City Express High Speed trains.

By car, the motorways Autobahns A1, A4, A3, A57, and A555 all lead to Cologne, though a car must have a "Low Emissions" sticker in order to drive around the city center.