How much does it cost to travel to Pune?

How much money will you need for your trip to Pune? All of these average travel prices have been collected from other travelers to help you plan your own travel budget.

A vacation to Pune for one week usually costs around ₨0.00 for one person. So, a trip to Pune for two people costs around ₨0.00 for one week. A trip for two weeks for two people costs ₨0.00 in Pune. If you're traveling as a family of three or four people, the price person often goes down because kid's tickets are cheaper and hotel rooms can be shared. If you travel slower over a longer period of time then your daily budget will also go down. Two people traveling together for one month in Pune can often have a lower daily budget per person than one person traveling alone for one week.


How expensive is Pune? How much money do I need for Pune?

How much does a trip to Pune cost? Is Pune expensive? The average Pune trip cost is broken down by category here. All of these Pune prices are calculated from the budgets of real travelers.

Pune On a Budget

Pune
Located in Maharashtra, Pune is the state's second largest city and cultural capital. Not only is it a hub for museums, temples, beaches, and scenic overlooks, but it also has a thriving nightlife and general atmosphere due to the student population.

One of Pune's best known landmarks is perhaps the Aga Khan Palace, a monument dedicated in memorial to Mahatma Gandhi and his wife Kasturba. The palace is a beautiful piece of architecture complete with Italian arches, salons, suites, and spacious green lawns.

Pune is also home to a number of impressive museums. Raja Dinkar Kelkar Museum is one such place, housed in a Rajasthani-style building, exhibiting a collection of Indian arts and crafts. Some highlights include carved palace and temple doors, 2,000 year old pottery, traditional Indian lamps, and 17th century paintings. The Darshan Museum is another impressive example, exhibiting a light and sound show of 3D holographic technology, based on the life of the saint, Sadhu Vaswani.

The Dagadusheth Halwai Ganapati Temple is another prime attraction, a pilgrimage site dedicated to the Hindu God, Ganesh. The temple consists of marble interiors and a 7.5-ft Ganesh idol crafted in gold. It is one of the most highly revered places of worship in India.

Though Pune is a small city, it has a number of thriving districts and neighborhoods worth exploring. Some of these include:

Deccan is the cultural district, housing a number of theaters, art galleries, and cinema halls.

Shivaji Nagar has a central bus stand and rail stop.

Koregaon Park houses some of the city's best restaurants, attracting a large number of foreign visitors.

The Peths constitute a cluster of old town neighborhoods, with narrow lanes, and many street vendors selling snacks.

Kothrud has many residential complexes as well as quality restaurants and shopping complexes.

Pashan is near Pune University, Pashan Lake, and is surrounded by peaceful hills.

In addition to visiting the sights all mentioned above, amongst many other hidden gems, some other activities in the city of Pune include things like shopping amidst bustling markets, sampling local flavors, and indulging in the rich culture, music, and art of India.

Some of the more adventurous options available also include paragliding, horseback riding, and trekking in the Bhimashankar Wildlife Sanctuary. There are also opportunities for bird watching, exploring the scenic hills of the surrounding area, visiting Panshet Water Park, or going on a Heritage Walk through Pune where visitors experience places of architectural, historical, and cultural importance.

Cuisine of Pune is typical of Maharashtrian cooking, which largely consists of staples which include wheat, rice, jowar, bajri, vegetables, lentils, and fruit. Jowar and bajri are both grass species cultivated for their grain. Chicken and goat are the most popular meats for non-vegetarian dishes in Maharashtra. Meals are prepared in a variety of ways from curry sauces based in coconut milk to red gravies or white gravies, all usually served with rice. Pickles and condiments often accompany main dishes. Chutneys, for example, are especially popular with preserves which include raw mango chutney, mint, tamarind chutney, cilantro, panchamrit, and mirachicha thecha, as well as dry varieties based on oil seeds such as flax seed, peanut, sesame, coconut, and karale. Herbs and spices used in much of the cooking include items like garlic, onion, coriander leaves, ginger, curry leaves, green chilli pepper, turmeric, mustard seeds, coriander, cumin, dried bay leaves, chili powder, cinnamon, cloves, black pepper, cardamon, and nutmeg. Street food and fast food snacks are especially popular in cities like Pune. The best variety can be found on North Main Road - a lane with more than 50 restaurants, offering a choice of cuisine including Italian, French, Mexican, Thai, Japanese, and a variety of local Indian food.

Pune is a major transportation hub for Western Maharashtra.

By plane, the nearest airport is in in Lohegaon located about 10 kilometers from the city center. It is an international airport served by Air India, Air India Express, Go Air, IndiGo, Jagson Airlines, Jet Airways, Kingfisher, Lufthansa (Operated by PrivatAir), and SpiceJet. If a direct flight is difficult to find, it is also possible to fly into Mumbai and then travel to Pune by taxi or train.

By train, Pune is well-connected to other Indian cities from Pune City Station. 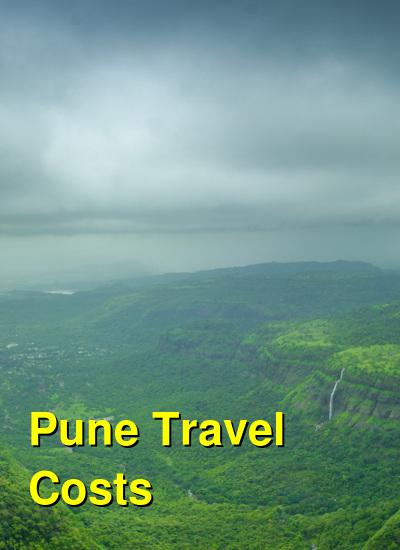