How much does it cost to travel to Amritsar?

How much money will you need for your trip to Amritsar? You should plan to spend around ₨3,573 ($43) per day on your vacation in Amritsar, which is the average daily price based on the expenses of other visitors. Past travelers have spent, on average, ₨1,251 ($15) on meals for one day and ₨1,097 ($13) on local transportation. Also, the average hotel price in Amritsar for a couple is ₨3,029 ($37). So, a trip to Amritsar for two people for one week costs on average ₨50,028 ($608). All of these average travel prices have been collected from other travelers to help you plan your own travel budget.

A vacation to Amritsar for one week usually costs around ₨25,014 for one person. So, a trip to Amritsar for two people costs around ₨50,028 for one week. A trip for two weeks for two people costs ₨100,056 in Amritsar. If you're traveling as a family of three or four people, the price person often goes down because kid's tickets are cheaper and hotel rooms can be shared. If you travel slower over a longer period of time then your daily budget will also go down. Two people traveling together for one month in Amritsar can often have a lower daily budget per person than one person traveling alone for one week.


How expensive is Amritsar? How much money do I need for Amritsar?

How much does a trip to Amritsar cost? Is Amritsar expensive? The average Amritsar trip cost is broken down by category here. All of these Amritsar prices are calculated from the budgets of real travelers.

Looking for a hotel in Amritsar? Prices vary by location, date, season, and the level of luxury. See below for options.

How much does it cost to go to Amritsar? Naturally, it depends on the dates. We recommend Kayak because they can find the best deals across all airlines.

The price of renting a car in Amritsar will depends on dates, the type of car, the location, and your age. We recommend Kayak because they can find the best deals across all car rental companies.

Tips and Handouts Budget in Amritsar

Amritsar On a Budget 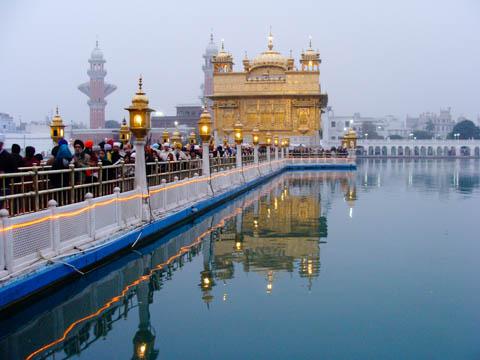 Amritsar, India
Amritsar is a holy city of the Sikh religion, named "holy pool of nectar" for the pool around the base of the Golden Temple complex. This complex is the city's main attraction, bringing pilgrims from all over to bathe in the waters of the sacred pool and visit the sacred temple.

The Golden Temple (also known as Harmandir Sahib) is a must-see on any visit to the holy city of Amritsar. The complex is the main attraction of the city and the most important religious place to the Sikhs, always full of thousands of pilgrims from all over India. Visitors are required to cover their head and remove their shoes as they explore the holy place. Just as beautiful at night, the temple is lit up after dark, reflected in the glimmering waters in the pool below. Some main parts of the complex include the Ghanta Ghar (main entrance gate and clock tower), Amrit Sarovar (pool of water that surrounds and reflects the temple), Harmandir Sahib (the temple itself), Akal Takht (where the highest council of Sikhs sits), and the Central Sikh Museum (which holds a gallery of paintings and guru knick-knacks).

Just a five minute walk from the temple is Jallianwala Bagh - a public garden with a memorial for the 1919 Amritsar massacre where British Indian Army soldiers opened fire on an unarmed gathering of men, women, and children. A sad but important piece of history, the bullet holes can be seen on the walls and adjoining buildings.

In Amritsar, the temple complex marks the center of the old walled city which has narrow streets mostly developed in the 17th and 18th century. Amritsar is also a unique example of an introverted planning system with areas called Katras (residential units designed for defense). With distinctive architecture, bustling markets, and plenty of street food to sample it is easy to pass the days away exploring the sights and sounds of Amritsar. The main commercial activities of Amritsar include tourism, carpets and fabrics, farm produce, handicrafts, and other trades.

Many visitors flock to India to experience its lively culture, cuisine, history, and architecture. Amritsar has much to contribute to that goal. While some may choose to explore the sights at their own pace, others who prefer a more guided experience might decide on one of the many tours available in the city. Some of these tours include a village tour which gives insight into traditional ways of life and culture, food tours which open the palette to the local culinary scene, and eco tours on wildlife. There are also plenty of walking tours which take visitors all over the city from heritage sites to bustling bazaars. Wandering the streets of this holy city can be an adventure in itself - a great way to immerse oneself in the local culture and become acquainted with all of its hidden gems.

Cuisine in Amritsar follows the Punjabi tradition, which largely consists of both vegetarian and meat dishes full of rich, buttery flavors with a minimal use of spices. Due to Hindu religious beliefs, beef is a banned item which is neither consumed nor sold in Punjab, so most meat dishes consist of lamb or chicken. Many of these are served with rice, basmati rice being the indigenous variety of Punjab. Breads like naan, chapatti, and paratha are also commonly served with meals. As far as regional specialties go, some popular items include things like sarson da saag, tandoori chicken, shami kebab, and makki di roti. Sarson ka saag is a popular vegetable dish in the Punjab regions of India and made from mustard leaves (sarson) and spices. Tandoori chicken is usually prepared roasted with yogurt and spices, taking its name from the cylindrical clay over called a tandoor in which it is traditionally cooked. Shami kebab is composed of a small patty of minced or ground meat with ground chickpeas, egg, and spices, while makki di roti is a kind of unleavened corn bread. There is also a popular yogurt drink called lassi.

By train, India has one of the longest rail networks in the world. Operations are run by Indian Railways with stations located at just about every major destination. Amritsar Junction railway station is the main stop that serves the city. Trains can be booked online, at the train station, or at the small booking office in the Golden Temple Complex.