How much does it cost to travel to Srinagar?

How much money will you need for your trip to Srinagar? You should plan to spend around ₨1,715 ($22) per day on your vacation in Srinagar, which is the average daily price based on the expenses of other visitors. Past travelers have spent, on average, ₨346 ($4.52) on meals for one day and ₨171 ($2.24) on local transportation. Also, the average hotel price in Srinagar for a couple is ₨2,000 ($26). So, a trip to Srinagar for two people for one week costs on average ₨24,009 ($314). All of these average travel prices have been collected from other travelers to help you plan your own travel budget.

A vacation to Srinagar for one week usually costs around ₨12,005 for one person. So, a trip to Srinagar for two people costs around ₨24,009 for one week. A trip for two weeks for two people costs ₨48,019 in Srinagar. If you're traveling as a family of three or four people, the price person often goes down because kid's tickets are cheaper and hotel rooms can be shared. If you travel slower over a longer period of time then your daily budget will also go down. Two people traveling together for one month in Srinagar can often have a lower daily budget per person than one person traveling alone for one week.


How expensive is Srinagar? How much money do I need for Srinagar?

How much does a trip to Srinagar cost? Is Srinagar expensive? The average Srinagar trip cost is broken down by category here. All of these Srinagar prices are calculated from the budgets of real travelers.

How much do vacation rentals cost in Srinagar? Prices vary by location, date, size of the place, and the level of luxury. See below for options.

How much does it cost to go to Srinagar? Naturally, it depends on the dates. We recommend Kayak because they can find the best deals across all airlines.

The price of renting a car in Srinagar will depends on dates, the type of car, the location, and your age. We recommend Kayak because they can find the best deals across all car rental companies.

Tips and Handouts Budget in Srinagar

Srinagar On a Budget 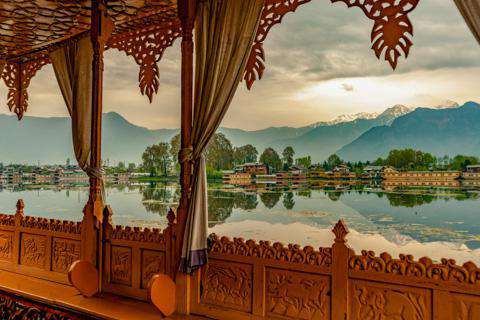 Srinagar, India
Lying on the banks of the Jhelum River, Srinagar is the largest city and the summer capital of the Indian state of Jammu and Kashmir. It is best known for its gardens, waterfronts, and houseboats as well as local traditional Kashmiri handicrafts and dried fruits.

Sometimes referred to as the "Kashmiri Venice" Srinagar is a city surrounded by water. Lakes in the immediate area include Dal Lake-noted for its houseboats-as well as Nigeen Lake and Anchar Lake. Apart from these, the city is also famous for Wular Lake (one of the largest fresh water lakes in Asia) and Manasbal Lake, both to the north of Srinagar. The Jhelum River, upon whose banks the city sits, is a tributary of the Indus River, and Dal and Anchar lakes.

The Mughal Gardens are also very famous, complete with terraced lawns, cascading fountains, and bright flowerbeds with boxes painted with a panorama of the Dal in front of them. Of these gardens, Nishat Bagh (the garden of spring) is situated on the banks of the Dal Lake with the Zabarwan Mountains as its backdrop, Shalimar Bagh is in front of Dal Lake built by Emperor Jahangir, and Chashma shahi (the royal fountains) is another beautiful example of a Mughal garden. Pari Mahal (the palace of the fairies) and Naseem Bagh are also worth a visit.

Other popular sights include Hazratbal Mosque, Jamia Masjid Mosque, a mosque and shrine called Ziarati Hazrati Youza Asouph, and Shankaracharya Mandir-a Hindu temple dedicated to Lord Shiva on a hilltop. Just on the outskirts of Srinagar, there is also Parihaspora, a place of ruins of the palaces of Kahmir's Buddhist and Hindu rulers and Buddhist places of worship.

Throughout Srinagar, there are a number of places to experience the local market scene and admire some of the region's handicrafts and specialty items. Popular goods with tourists include pashmina garments, locally handmade woolen socks, gloves, caps and sweaters, prayer wheels, Buddhist masks and Thangka paintings, Tibetan silver and traditional jewelry with turquoise, as well as handwoven rugs, amongst much more. The Polo View market is one such place specializing in handmade crafts, as is the Badshah Chowk market place which has beautiful carpets and pashmina shawls, as well as Lal Chowk with just about any handicraft imaginable. Srinagar is also home to the unique floating vegetable market, where vendors sell goods from their houseboats on Dal Lake. The markets and areas around the lake are also great places to find restaurants and cafes.

Within the city, one of the most common activities is to take a ride on a skikara, or houseboat, on Dal Lake. Paragliding is also popular, where visitors can get a sweeping view of the city and its gardens and waterways from above. Srinagar also serves as a home base for adventure tourism, with many visitors looking to trek into the high altitude lakes of the Himalayas. Some of these alpine lakes include Vishansar Lake, Nundkol Lake, Tarsar Lake, Gadsar Lake, and Satsar Lake, amongst others.

The more popular restaurants and cafes of Srinagar are located in Lal Chowk or on Boulevard along the banks of the Dal Lake. Most restaurants will serve Kashmiri, Indian, Mughlai, and 'Indianized' Chinese dishes. Some of the local cuisine consists of rogan-gosht (meat cooked in red gravy), gushtaba (soft meatballs cooked in natural yogurt), rishta (soft meatballs in gravy), tabakmaaz (deep-fried lamb ribs), and kanti (small chunks of meat cooked with onions). Most meat dishes consist of chicken or mutton and are served with rice. Another local delicacy called is seekh-tuji which consists of marinated meat pieces, freshly barbecued and eaten with chutney. As far as drinks go, kahwah is a traditional green tea recipe from Kashmir made from green tea leaves with saffron strands, cinnamon bark, and cardamom.

Sheikh ul Alam Airport, commonly known as Srinagar Airport, offers international service. Flights are operated by Jet Airways, Jet Konnect Indigo, SpiceJet, Go Air, Jet Lite and Air India from Delhi and Mumbai to Srinagar, with or without a layover at Jammu. Planes fly once or twice a day by each airline.

It is common for visitors to take the train to Jammu followed by a taxi or bus ride to Srinagar. Typical travel time from Jammu to Srinagar is 11-12 hours, while the ride from Srinagar to Jammu is about 9-10 hours (without any traffic). J&K State Road Transport Corporation (J&KSRTC) operates buses from Jammu, taking about 12 hours. Two-day buses run between Srinagar and Leh staying overnight in Kargil, as well as a direct 24-hour bus ride from Delhi to Srinagar.