How much does it cost to travel to Miami?

How much money will you need for your trip to Miami? You should plan to spend around $164 per day on your vacation in Miami, which is the average daily price based on the expenses of other visitors. Past travelers have spent, on average, $33 on meals for one day and $32 on local transportation. Also, the average hotel price in Miami for a couple is $209. So, a trip to Miami for two people for one week costs on average $2,293. All of these average travel prices have been collected from other travelers to help you plan your own travel budget.

A vacation to Miami for one week usually costs around $1,147 for one person. So, a trip to Miami for two people costs around $2,293 for one week. A trip for two weeks for two people costs $4,586 in Miami. If you're traveling as a family of three or four people, the price person often goes down because kid's tickets are cheaper and hotel rooms can be shared. If you travel slower over a longer period of time then your daily budget will also go down. Two people traveling together for one month in Miami can often have a lower daily budget per person than one person traveling alone for one week.


How expensive is Miami?

How much does a trip to Miami cost? Is Miami expensive? The average Miami trip cost is broken down by category here. All of these Miami prices are calculated from the budgets of real travelers.

While meal prices in Miami can vary, the average cost of food in Miami is $33 per day. Based on the spending habits of previous travelers, when dining out an average meal in Miami should cost around $13 per person. Breakfast prices are usually a little cheaper than lunch or dinner. The price of food in sit-down restaurants in Miami is often higher than fast food prices or street food prices.

How much do AirBnB's cost in Miami? Prices vary by location, size of the place, and the level of luxury. See below for options.

How much money do I need for Miami?

How much do tours to Miami cost? Multi-day tours can often be an effecient way to see the highlights of a country or region.

How much does it cost to go to Miami? Naturally, it depends on the dates. We recommend SkyScanner because they can find the best deals across all of the airlines.

Miami On a Budget

Miami, Florida
Miami is a popular tourist destination and a modern city in South Florida. It has beautiful white beaches, crystal blue waters, cosmopolitan neighborhoods, impressive shopping, and excellent dining opportunities. It is also a gateway to the Florida Keys, which is another popular destination in South Florida.

Many people enjoy spending time at the beach while they're in Miami, but once you have had your fill of the water, then there are plenty of cultural experiences around town. There are several top rated sights in Miami. Star Island is an artificial island near Miami Beach. The Venetian Pool is a nice limestone quarry which has been made into a pool with a water fall. Oleta River State Recreation Park is a great place to canoe or kayak. Zoo Miami has over 1,200 animals and Vizcaya Museum and Gardens is a beautiful European inspired estate.

Miami Beach is actually a different municipality from Miami. It sits on a barrier island that is to the east of the city and Biscayne Bay.

Miami is world famous as a party destination and as such, it has plenty of festivals that are worth visiting. Some of these include the Ultra Music Festival, Calle Ocho, a historic street festival, Carnaval Miami, Miami Fashion Week, and the South Beach Wine & Food Festival, among many others.

There is no shortage of excellent dining options in Miami. Some of the best chefs in the United States have opened restaurants here. You'll find plenty of top five star restaurants, but also some great street food options in the form of hot dogs or ice cream. Obviously, seafood is another excellent food option in Miami as well and there is no shortage of seafood restaurants. Miami is also known for it's Latin cuisine, and Cuban restaurants are quite popular and good. You'll also find dishes from countries throughout South America. Other ethnic foods found around town include Chinese, Japanese and Middle Eastern.

Most people choose to fly into Miami International Airport, although Fort Lauderdale International Airport is not far away, less than an hours drive depending on traffic. If you choose to drive to Miami, it is important to realize that traffic can be crazy and chaotic. Driving is generally not a relaxing experience. There is a more elaborate public transportation system in Miami than in any other city in Florida, but it is still frustratingly slow and inconvenient. The bus system covers the entire metropolitan area and connects Broward County and the Greater Fort Lauderdale area. Heavy traffic congestion means that buses can be slow and are often behind schedule.

The Metrorail has the Green and the Orange Line. It's an elevated system that has 23 stations. Tourists may find this system convenient because it connects downtown Miami, Miami International Airport, Dadeland Mall, Vizcaya Museum and Gardens, Lowe Art Museum, Miami Museum of Science, Village at Merick Park, and many shopping areas.

If you have no shortage of time, then public transportation is an option, but otherwise you want to take taxis or drive yourself to your destinations. Taxis can be expensive and will typically require a phone call for pick up. 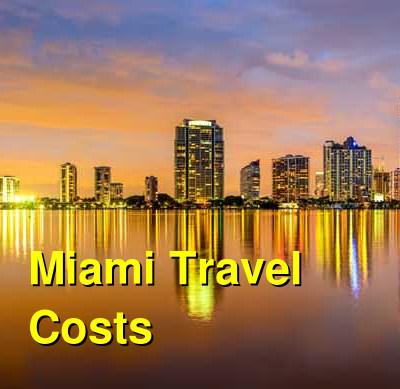