How much does it cost to travel to Tampa?

How much money will you need for your trip to Tampa? You should plan to spend around $118 per day on your vacation in Tampa, which is the average daily price based on the expenses of other visitors. Past travelers have spent, on average, $45 on meals for one day and $28 on local transportation. Also, the average hotel price in Tampa for a couple is $108. So, a trip to Tampa for two people for one week costs on average $1,657. All of these average travel prices have been collected from other travelers to help you plan your own travel budget.

A vacation to Tampa for one week usually costs around $828 for one person. So, a trip to Tampa for two people costs around $1,657 for one week. A trip for two weeks for two people costs $3,314 in Tampa. If you're traveling as a family of three or four people, the price person often goes down because kid's tickets are cheaper and hotel rooms can be shared. If you travel slower over a longer period of time then your daily budget will also go down. Two people traveling together for one month in Tampa can often have a lower daily budget per person than one person traveling alone for one week.


How expensive is Tampa?

How much does a trip to Tampa cost? Is Tampa expensive? The average Tampa trip cost is broken down by category here. All of these Tampa prices are calculated from the budgets of real travelers.

While meal prices in Tampa can vary, the average cost of food in Tampa is $45 per day. Based on the spending habits of previous travelers, when dining out an average meal in Tampa should cost around $18 per person. Breakfast prices are usually a little cheaper than lunch or dinner. The price of food in sit-down restaurants in Tampa is often higher than fast food prices or street food prices.

The cost of a taxi ride in Tampa is significantly more than public transportation. On average, past travelers have spent $28 per person, per day, on local transportation in Tampa.

How much does it cost to go to Tampa? Naturally, it depends on the dates. We recommend SkyScanner because they can find the best deals across all of the airlines.

How much do tours to Tampa cost? Multi-day tours can often be an effecient way to see the highlights of a country or region.

Find a hostel, guesthouse, or B&B in Tampa

Tampa On a Budget

Tampa, Florida
On the north shore of Tampa Bay, across the water from Saint Peterburg, is the city of Tampa. The city has a population of almost 350,000. The metropolitan area includes Tampa, St. Peterburg, and Clearwater. It has about 2.9 million residents and is the second largest metropolitan area in the state. The city is a popular destination for outdoor activities and in 2008 it was ranked the 5th best outdoor city by Forbes.

The climate in Tampa is humid subtropical. The winters are mild but there are occasionally cold spells that bring night time temperatures down near freezing. Although it is very rare, snow has fallen in Tampa. Spring and Fall are both warm and humid and summer can become quite hot. Thunderstorms are also frequent during the summer months.

There are some popular destinations in Tampa which attract tourists from around Florida and elsewhere. In particular, the Busch Gardens theme park is a favorite of adults and children alike. Also of interest is the Lowry Park Zoo and the Florida Aquarium. There are some museums around town like the Tampa Museum of Art and the Museum of Science and Industry. Tampa is also home to the University of South Florida. It is also worth exploring Ybor City. This is a historic, multi-ethnic area that is located northeast of the city's downtown. There are many nightclubs, bars, and shops that appeal to people who are looking for nightlife activities. During the day you can explore the historic district that was originally home to many Cuban, Spanish and Italian immigrants. There were many cigar factories and the area is credited with bringing the Cuban sandwich to the United States.

The city is split into five different districts that spread out from the downtown area. West Tampa is west of the downtown area, just across the Hillsborough River. South Residential is a predominantly residential area that goes south on the Interbay Peninsula. Historic Ybor City is just northeast of downtown and blends with the area. East Tampa is north of Ybor City and North Tampa is the area north of Busch Boulevard.

Activities in Tampa include taking walking tours, going fishing on the bay, taking a cruise of the bay, or attending one of the many festivals in town.

If you're interested in doing some shopping while you're in town then your best options are the SoHo District, which has upscale shopping near downtown, Palma Ceia south of Hyde Park, the Big Top Flea Market, and Channelside near the cruise ship terminals. Other malls in the area are the International Plaza Mall, Westshore Plaza Mall, University Mall, and Citrus Park Town Center.

There are many budget restaurants and cafes around Tampa, many of which have an international flare. You'll find plenty of Mexican options and there are many taco stands around town. There are also a variety of great Cuban restaurants, as well as pizza, sandwiches and hotdogs. If you're looking for something a little nicer, there are some great seafood restaurants that serve up a delicious and reasonably priced meal. Overall, Tampa proves to be a very budget conscious destination for travelers.

Tampa Car Rental Prices
Compare prices across all major rental companies:
While there is a bus system and a streetcar in Tampa, you really need to have a car to travel any significant distance. Like most mid-sized American cities, the public transportation system is lacking and the buses are unreliable and do not thoroughly cover the city. There are three types of routes available: Local, Commuter Express, and Trollies. Local routes cover short distances with frequent stops. Commuter Express lines go long distances into the suburbs. Trolley routes are operated with rubber-wheel trolleys, which are diesel buses designed to look like streetcars. They run through the Central Business District north and south through downtown to the northern end of Harbor Island.

The streetcar, while quaint, only covers a short distance from Whiting and Franklin Streets to Centennial Park. There are eleven stops along the line and it passes by many shops, restaurants and sights. 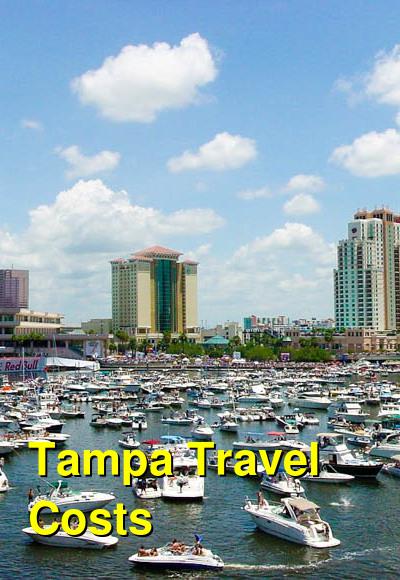